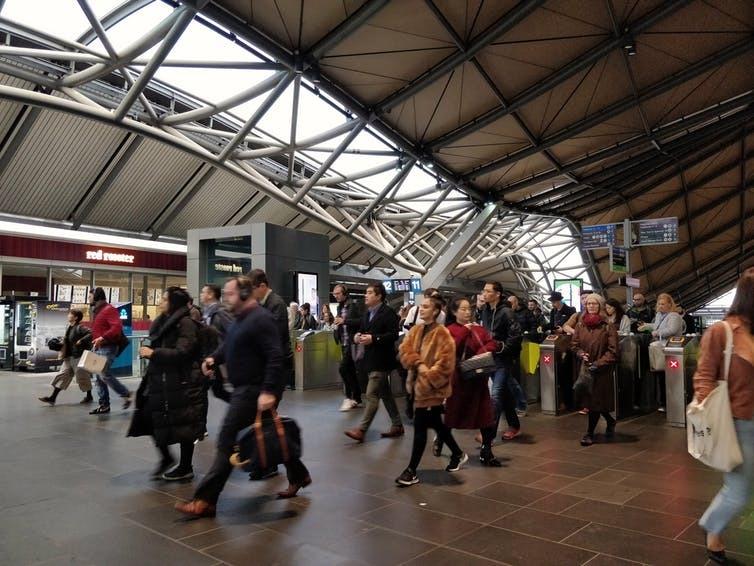 Governments are looking to fast rail services to regional cities to relieve population pressures in Sydney, Melbourne and Brisbane. The federal government is funding nine business cases for such schemes. But what economic effect might these fast links have on the regional cities?

The current fast rail schemes seem oriented at relieving population pressures in the major cities rather than a productive regional economic purpose. The minister for population, cities and urban infrastructure recently stated:

… the National Faster Rail Agency begins operating from today [July 1]. The new Agency will oversee the government’s 20-year fast rail agenda, which will connect satellite regional cities to our big capitals. This will allow people to reside in regional centres with its [sic] cheaper housing and regional lifestyle but still access easily and daily the major employment centres.

À lire aussi : We can halve train travel times between our cities by moving to faster rail

Concern is growing among international observers that fast rail connections between two cities benefit the larger of the pair. Professor Michael Storper observed:

One of the biggest mistakes we’ve made was being naïve about connectivity – give infrastructure and it spreads. Well, often it concentrates. The high-speed train network in France, guess what it did. It advantaged Paris.

While Paris is seen as benefiting the most from the national fast rail TGV service, the regional cities of Lyon and Lille have strengthened their economic positions. The Lyon and Lille fast rail stations form the hub of their respective regional transport networks and have attracted new commercial activity. They also sit at intersections of major European fast rail networks.

It’s a pattern that cannot be easily achieved for Australia’s regional cities due to our widely dispersed settlements. So what does this mean for our regional cities?

Improving transport infrastructure doesn’t just improve regional business access to metropolitan markets. It decrease the costs of trade in both directions. And large cities are typically more productive economically. This is because they offer more specialised goods and services and can leverage the agglomeration effects of shared high-quality labour markets and infrastructure, plus a concentration of skills and knowledge.

À lire aussi : Our big cities are engines of inequality, so how do we fix that?

Reduced travel times can mean regional businesses become less efficient than metropolitan competitors that can offer a wider range of specialist goods and services. This may lead to regional business closures, employment losses and wage decline. Unless a regional city is able to develop a specialised set of high-skill, high-wage industries that complement or outcompete the metropolis it risks being economically disadvantaged by faster rail.

New regional demand arising from commuter population growth might counter the loss of higher-order regional jobs due to improved transport links. But that will largely be in lower-value retail and personal service sectors. The result will still be a net economic gain for the metropolis.

À lire aussi : The growing skills gap between jobs in Australian cities and the regions

An influx of commuters earning metropolitan wages might also inflate regional housing markets. This would disadvantage lower-paid regional workers. The beneficiaries of this scenario are likely to be local rentiers, such as landholders and developers who can profit from land-price inflation.

The example of Geelong

The most advanced of the current Australian proposals is the Geelong-Melbourne route. It has received federal and state funding for planning with an estimated total cost of at least A$10 billion. But planners need to ask how this spending will provide a net economic benefit, and how the benefits will be distributed.

Growth in commuter population and the services this attracts may be seem like a resolution to metropolitan population problems, but could further concentrate higher-paid jobs in Melbourne. Faster commutes mean Melbourne-based firms will have a greater pick of Geelong-based workers, thus consolidating metropolitan competitive advantage. Fast rail thus risks placing Geelong at a competitive disadvantage, with jobs and workers being exported to Melbourne.

Meanwhile the pressure of housing another 145,000 residents in the next 20 years already falls on Geelong, a city of 280,000 people. The strain on infrastructure and services is proportionately greater than would be the case in Melbourne, which has nearly 5 million residents.

À lire aussi : This is how regional rail can help ease our big cities' commuter crush

What can policymakers do about this?

To resolve this conundrum, thought must be given to what specialised high-value jobs will be attracted to regional cities to accompany fast rail investments, so these cities remain competitive and productive, regionally, nationally and internationally. This might include policies such as relocating public agencies, regional targeting of university-based research and development spending, boosting services such as schools and hospitals, and providing incentives for innovative private companies to relocate to regional towns.

Policymakers should also consider positioning regional cities as rail network hubs in their own right. An example would be connecting Geelong, Ballarat and Bendigo by rail, along with better linkages to national and international airports.

We don’t yet know for sure what the effects of fast rail on regional cities will be. But the impact of this infrastructure needs to be assessed very carefully lest it turns Australia’s regional cities into dependent population dormitories rather than regional dynamos, at vast public expense.