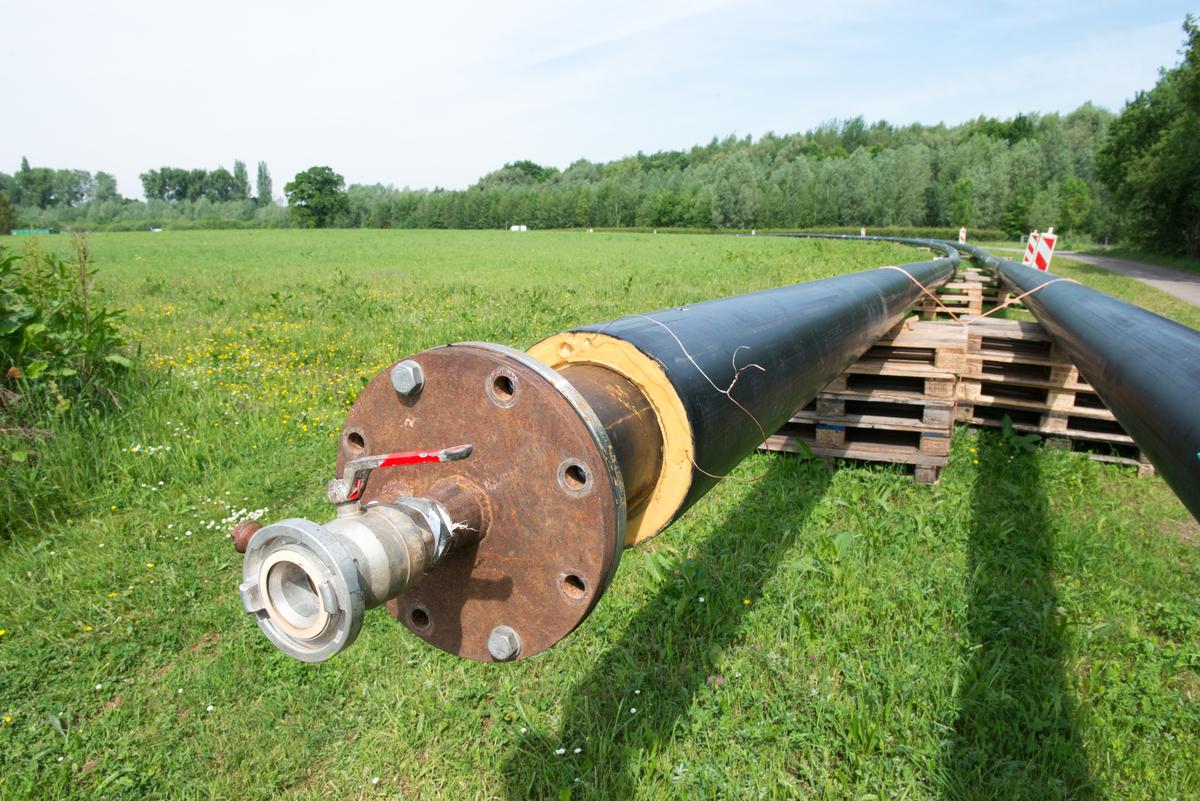 Mijnwater B.V. is building a new network of pipes in Heerlen that will supply cooling and heating to homes, offices, stores, and industrial businesses. It is a circular energy network that stores heat or cold for a later time. What makes it unique is that such a heating and cooling network can save 65 to 90% energy consumption in any other city.

In 2003 the municipality of Heerlen came up with the plan to conduct test drilling in the old mines in an effort to find sustainable energy sources. Since their closing 60 years ago, those mines had become flooded with groundwater. The municipality soon discovered that the heated water at a depth of 700 meters could be used to heat buildings in a sustainable way. Heerlen had a successful initiative: the Mine Water Project.

For the next stages of the implementation, the municipal project was converted into a social company in 2013: Mijnwater B.V. Since then, work is being done on the fifth generation of district heating and cooling, 5GDHC for short. The first step was drilling a fifth series of boreholes, which were connected via a main pipe to transport the energy to and from the mine water. Next, 50,000 m2 of floor area in buildings was connected to the first mine water power station in the world. Heat pumps ensure the right end temperature. The so-called 'backbone' is the main pipe that connects to the mine water reservoir and has a length of about ten km. This is the distance between the deep, hot end of the mine (28°C), and the shallow, cooler end (16°C). The backbone transports the water coming from the mine shafts, including dissolved gases and minerals. This leads to special requirements, especially when it comes to water pressure. For that reason, an obvious solution was to build a number of cluster grids according to the same principle, but for transporting clean water. In underground facilities, large heat exchangers ensure the exchange between heat and cold between the backbone and each cluster grid.

The exchange of heat and cold between users can save a lot of net energy on a district level - up to 50%, in fact. This energy doesn't necessarily have to come from the mine water reservoir. This makes it possible to serve many more connections using the same source.

The heating grid is future proof, in part because it's no longer dependent on natural gas, even for additional heating during harsh winters. Hot tap water is generated with a small booster heat pump and stored in a boiler. Both are an integral part of the mine water system. The main advantage is that peak demand for hot water is covered by the boiler's heat buffer. In addition, the boiler is optimally controlled and is always filled with hot water for when you want to take a shower. The heat in a building's own construction also serves as a buffer.

The water in the heating grid retains heat itself as well, which potentially allows the Mijnwater grid to strongly reduce peak demand of heat or cold. As a result, the size of the systems remains limited; a significant cost-saving measure when it comes to heat pumps. Optimal peak demand management enables existing heating grids to serve a larger number of connections, reducing the net investment per connection. Everybody benefits because the costs of the investment are shared over a larger number of connections.

Such a low-temperature heating grid can operate using little external energy. That's because the losses are very low (about 5%), and there is a constant exchange between hot and cold. An important condition is that the buildings have been configured for low-temperature heating (< 55 °C). This is already the case for many buildings, but other buildings can be adapted using suitable insulation and, preferably, ventilation with heat recovery (A-level label). That way, existing radiators will not have to be replaced. Another option is to install (additional) air heating and cooling or adding a single convector. A big advantage of blowing air in is that even existing buildings can be kept comfortably cool in the summer. This is done using low power to prevent complaints about comfort, but for 24 hours a day. Residents will only pay a small fee for this, as supplying cold means harvesting heat. And the less energy a building uses, the more other buildings can be served using the same infrastructure. Everybody benefits. In addition, Mijnwater wants to help the industrial sector to make its own energy use more efficient: by reusing heat, for instance, whenever possible, within the company first. The low-temperature rest heat that then remains is transported to the area's public pool, houses, and so on through the Mijnwater grid. What's left will eventually end up in the backbone via the cluster basement to be shared with other clusters or to be stored in the underground mine water reservoir.

The success of the mine water technology serves as an example to other cities eagerly looking for natural gas-free alternatives. In principle, it's possible to build a similar network in other cities that, for instance, connects existing thermal energy storage (TES) with houses and other heat sources in the city. Examples would be (cooled) supermarkets, data centers, office buildings, etc. Installing a local thermal energy grid

will lead to significant savings for everyone involved. That's because the bigger investments are shared; it's a challenge that should be grasped with both hands. Forming such a collaboration does require a well-organized directorial role, since multiple building owners will need to work together. It's not only the power company that has an important role here; the government does, too. A 5GDHC mini-grid needs to be of a certain size in order to cover the basic infrastructure. This would mean about 30,000 m2 of building floor area, preferably mixed use. For instance, a small shopping center, a number of offices, a school, and 150-200 houses. Working with school boards and housing associations, municipal governments can take on that directorial role, as well as serve as the launching customer. Within Interreg-NWE project D2Grids, experts are looking into how this works and are working on an investment model. Mijnwater B.V. is lead partner of this project with a scope of € 20 million. Research conducted by CE-Delft and IF-technologie shows that up to three million homes in the Netherlands can be disconnected from natural gas with 5GDHC. For the national natural gas-free districts pilot, Mijnwater B.V. Heerlen is already rolling out the concept to its neighbor city, Brunssum. In addition to newly constructed houses, it concerns the renovation of existing housing projects and privately owned buildings. Mijnwater B.V. will not be connecting Brunssum to the backbone in Heerlen, but will instead develop the thermal grid based on TES systems connected to an aquifer at a depth of 100 m. The first underground facilities with the power stations and the required network of thermal pipes have recently been put in the ground. The TESs operate as a buffer and are (temporarily) being supported by air/water heat pumps. Temporarily because large buffers have also been planned for Brunssum, such as an Ecovat. The biggest strength remains the 5GDHC concept.

The 5GDHC grid has been embraced by the Parkstad-Limburg urban region. The PALET (Parkstad-Limburg Energy Transition) ambition document states that the region must be energy neutral by 2040. Mijnwater is making a considerable contribution to this by supplying nearly all buildings with heating and cooling within 25 years. The province has declared the development in Parkstad as the spearhead of its energy policy. That brings us back to Heerlen. With a local government that views the energy transition as an opportunity to benefit the region. With the courage to take the initiative as an entrepreneurial government. Without that courage, we wouldn't have had Mijnwater.

Quote: "Local thermal energy grid will lead to significant savings for everyone involved."