Commuting by subway? What you need to know about air quality

Four more major Indian cities will soon have their own metro lines, the country’s government has announced. On the other side of the Himalayas, Shanghai is building its 15th subway line, set to open in 2020, adding 38.5 km and 32 stations to the world’s largest subway network. And New Yorkers can finally enjoy their Second Avenue Subway line after waiting for almost 100 years for it to arrive.

In Europe alone, commuters in more than 60 cities use rail subways. Internationally, more than 120 million people commute by them every day. We count around 4.8 million riders per day in London, 5.3 million in Paris, 6.8 million in Tokyo, 9.7 million in Moscow and 10 million in Beijing.

Subways are vital for commuting in crowded cities, something that will become more and more important over time – according to a United Nations 2014 report, half of the world’s population is now urban. They can also play a part in reducing outdoor air pollution in large metropolises by helping to reduce motor-vehicle use.

Large amounts of breathable particles (particulate matter, or PM) and nitrogen dioxide (NO2), produced in part by industrial emissions and road traffic, are responsible for shortening the lifespans of city dwellers. Public transportation systems such as subways have thus seemed like a solution to reduce air pollution in the urban environment.

But what is the air like that we breathe underground, on the rail platforms and inside trains?

Over the last decade, several pioneering studies have monitored subway air quality across a range of cities in Europe, Asia and the Americas. The database is incomplete, but is growing and is already valuable. 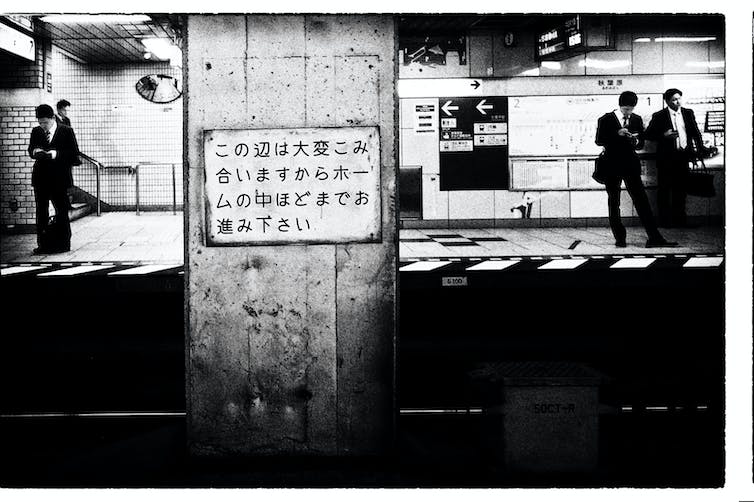 For example, comparing air quality on subway, bus, tram and walking journeys from the same origin to the same destination in Barcelona, revealed that subway air had higher levels of air pollution than in trams or walking in the street, but slightly lower than those in buses. Similar lower values for subway environments compared to other public transport modes have been demonstrated by studies in Hong Kong, Mexico City, Istanbul and Santiago de Chile.

Of wheels and brakes

Such differences have been attributed to different wheel materials and braking mechanisms, as well as to variations in ventilation and air conditioning systems, but may also relate to differences in measurement campaign protocols and choice of sampling sites. 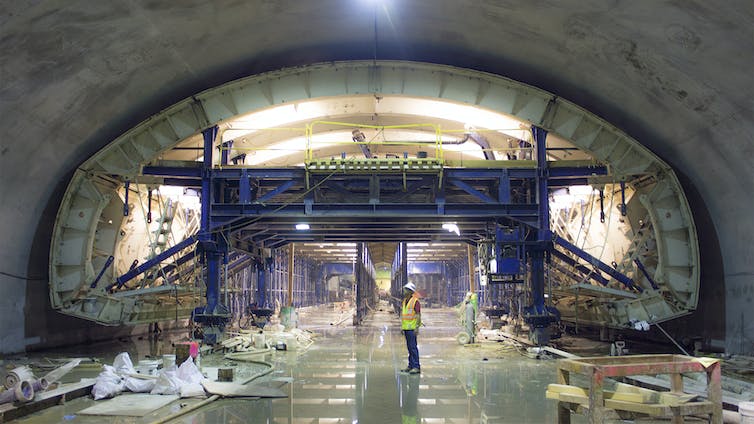 In particular, much subway particulate matter is sourced from moving train parts such as wheels and brake pads, as well as from the steel rails and power-supply materials, making the particles dominantly iron-containing.

To date, there is no clear epidemiological indication of abnormal health effects on underground workers and commuters. New York subway workers have been exposed to such air without significant observed impacts on their health, and no increased risk of lung cancer was found among subway train drivers in the Stockholm subway system.

But a note of caution is struck by the observations of scholars who found that employees working on the platforms of Stockholm underground, where PM concentrations were greatest, tended to have higher levels of risk markers for cardiovascular disease than ticket sellers and train drivers.

The dominantly ferrous particles are mixed with particles from a range of other sources, including rock ballast from the track, biological aerosols (such as bacteria and viruses), and air from the outdoors, and driven through the tunnel system on turbulent air currents generated by the trains themselves and ventilation systems.

The most extensive measurement programme on subway platforms to date has been carried out in the Barcelona subway system, where 30 stations with differing designs were studied under the frame of IMPROVE LIFE project with additional support from the AXA Research Fund.

In trains where it is possible to open the windows, such as in Athens, concentrations can be shown generally to increase inside the train when passing through tunnels and more specifically when the train enters the tunnel at high speed. 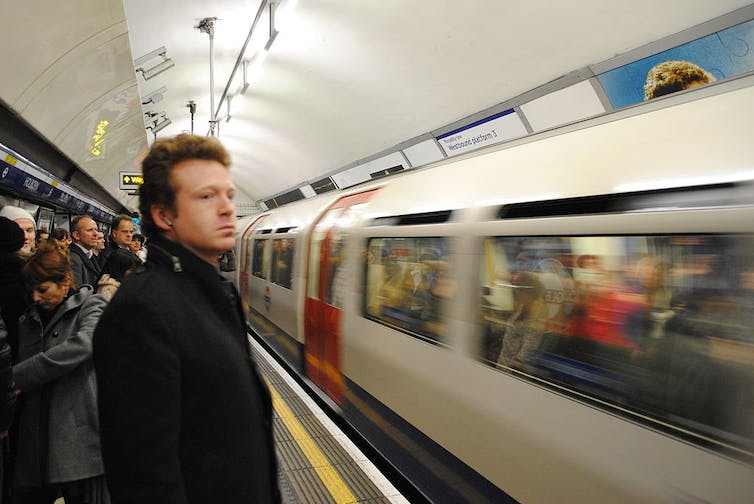 According to their construction material, you may breath different kind of particles on various platforms worldwide. London Tube/Wikimedia, CC BY-SA

Although there are no existing legal controls on air quality in the subway environment, research should be moving towards realistic methods of mitigating particle pollution. Our experience in the Barcelona subway system, with its considerable range of different station designs and operating ventilation systems, is that each platform has its own specific atmospheric micro environment.

To design solutions, one will need to take into account local conditions of each station. Only then can researchers assess the influences of pollution generated from moving train parts.

Such research is still growing and will increase as subway operating companies are now more aware about how cleaner air leads directly to better health for city commuters.

Created in 2007, the Axa Research Fund supports more than 500 projets around the world conducted by researchers from 51 countries. To learn more about the work of Fulvio Amato, visit the dedicated site.