We are over 30 young and passionate students, from fields ranging from architecture, engineering, communication or management, and together we form the EFdeN team.

In 2014 we represented Romania in the final for Solar Decathlon Europe in France, alongside 19 teams from 16 countries and 4 continents. We attended 10 interdisciplinary events, from architecture to engineering, innovation and communication.

We designed and built an extraordinary safe and comfortable solar house, energetically efficient. The house is automatized, being 100% electrical, without monthly bills and environment-friendly.After many hours of work and dedication, the house became Romania’s First Center of Research for Comfort Conditions - EFdeN 4C.

We participated with this house in the Solar Decathlon competition, in the 2014 edition. Because we had to transport the house to France and back, to Versailles, it had to respect a modular model. Based on this modular design, our permeability simulations didn't match with the real tests. That's why, next time, we hope to manage a more compact model, with as few joints as possible.

Also, the facade is made from 3mm ceramic plaques. During the construction stage, we discovered it is very breakable and thin, some of them being ruined either by transportation, either by bad handling.

Our prototype is open for the public every Thursday and Sunday, and during special occasions, such as "Museum Nights" or during important visits. People were overjoyed by the concept of "The Futuristic House" and some even traveled from other countries to visit and see the new technologies and innovations. Also, some of our colleagues did an experiment, sleeping in the house for three days. The feedback was positive, the ability to control the lights and the heat coming in handy, as well as the modular design, describing the house "comfortable" and "feeling like a true residence".

A one-year monitoring interval will start soon, with our Living Building Challenge application. At this time no corrective actions have been done.

The majority of the materials and equipments used in the HVAC system can be reused or recycled in high percent. Most of them contain materials like copper, steel, aluminum and brass known for their recyclable and reusable properties.
Overall, the percentage of reuse and recycle of the HVAC system is 95%. The toxic substance that is found in the HVAC system is the refrigerant used by the heat pump, specifically the R407C. The refrigerant is contained in a closed circuit, in the outside of the heat pump, so the eventual risk probability is very low.

We also have photovoltaic panels, solar panels and heat pumps.

We use buffer zones, thermic table, shadowing system, ceramic facade, PCMs (Phase Changing Material) and the photovoltaic panels, that cover the terasse and hide it from sunlight.

We use the BMS system in order to keep parameters of thermal comfort and indoor air quality values within the maximum admissible limits. In order to obtain the desired effect we monitor the exterior parameters of temperature, solar radiation humidity and 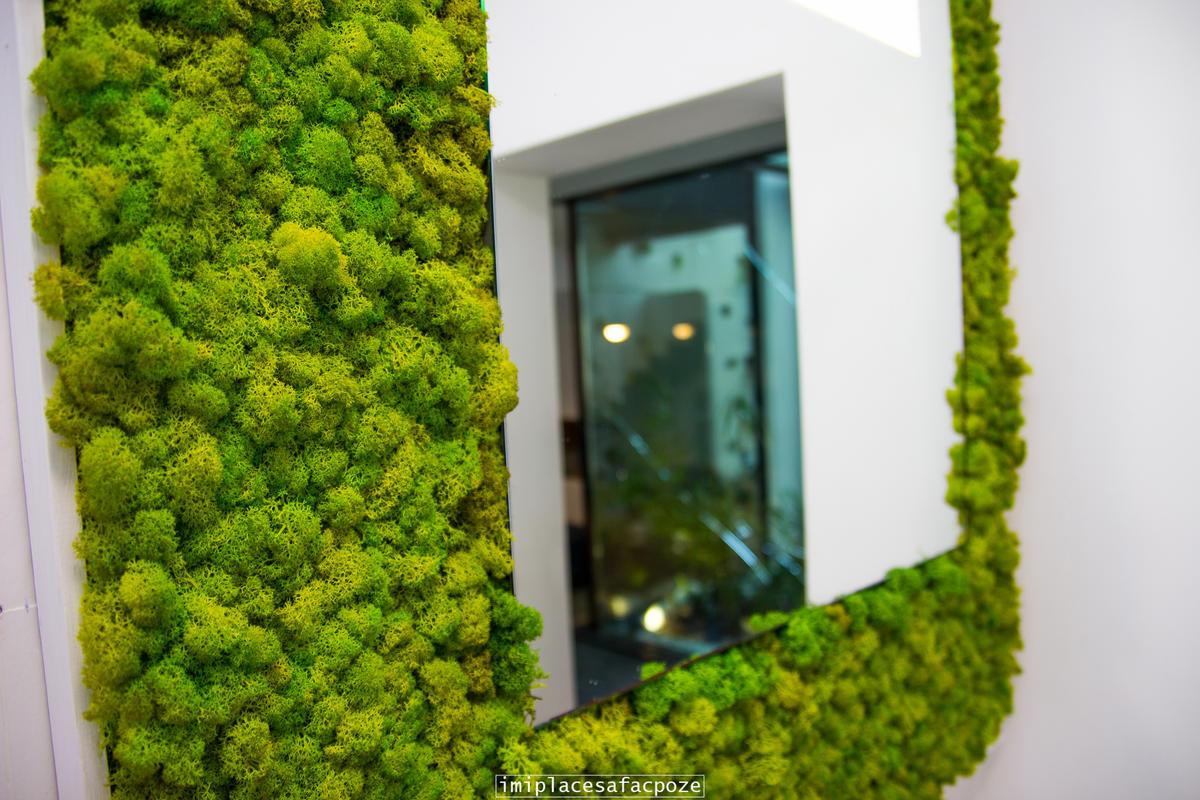 It is a natural moss that is called Blue Mohito. It has not only aesthetic but also functional properties, absorbing moisture and gradually releasing it.

The moss was chosen for its functional purposes. Also, it helped our goal of increasing the green space per capita, integrating nature in the EFdeN house. 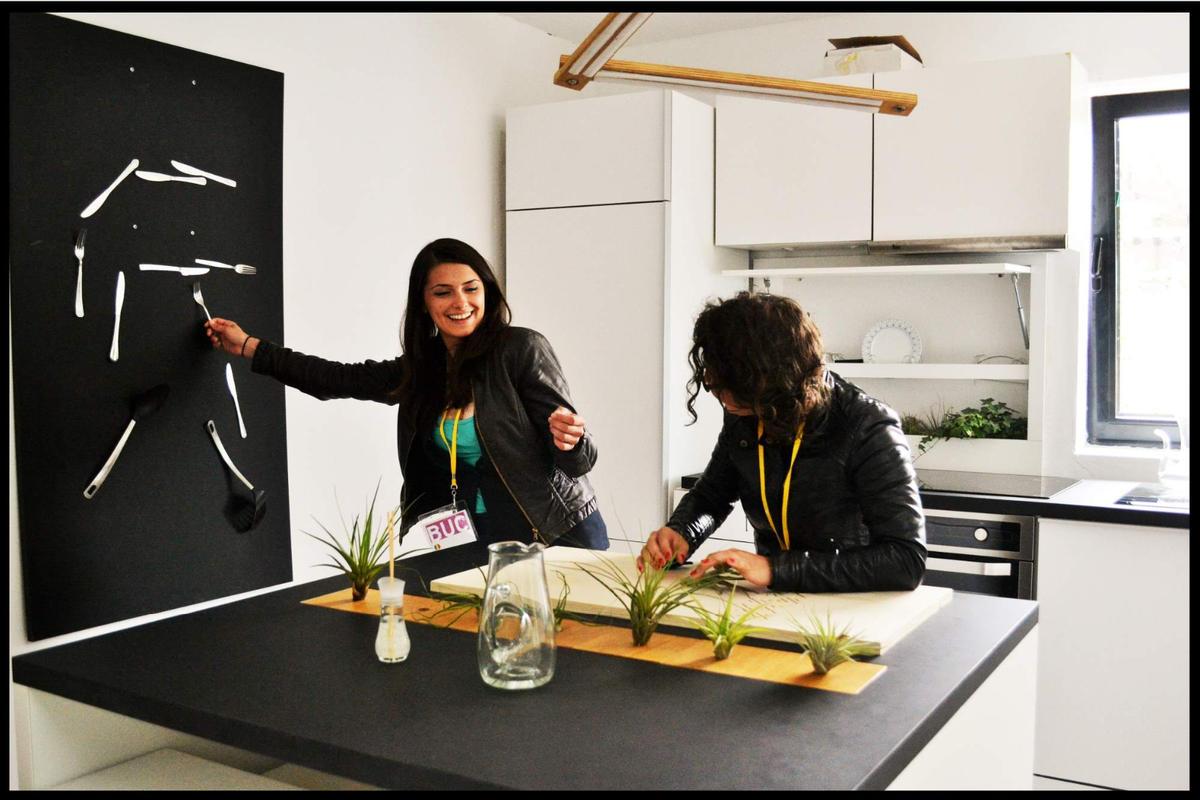 The external surface of Aspera Fenix Nanotechnology involves the use of nanotechnology and it is characterized by next generation acrylic resins, hardened and fixed with Electron Beam Curing process, opening up new avenues in the field of interior design. With low light reflectivity, its surface is extremely opaque, anti-fingerprint and features a very pleasant soft touch. Thanks to the use of nanotechnologies, Aspera Fenix Nanotechnology thermally heals any superficial micro-scratches, as its name indicates.

This material, with its power to regenerate, was greatly accepted and embraced by our members and our stakeholders. Being easily cleanable and its scratches self-healing, it respects our goal of reducing unnecessary household items in the EFdeN house.

At the moment, the EFdeN prototype is situated in the yard of the Faculty of Installations in Bucharest, in a central, easily accessible area. Being a research center, the location is perfect for the pertaining students, who can come and study the equipment and the houses’ effect on the environment.

Still, the house was designed as part of a residential complex, its purpose being to revitalize the old industrial neighborhoods, the disaffected spaces, known as “brown-fields”, of Bucharest.

We wish to participate in the "​Energy and temperate climates" category, because our house, EFdeN 4C is placed in Romania, a country located in a temperate climate, where a winter heating is required.

The "Low Carbon" category is also appropriate for our prototype. We integrated vegetation and biodiversity, such as open spaces, roofs & green walls, urban agriculture, etc.

We can apply to the "Smart building" category as well, because EFdeN 4C has intelligent systems that are used efficiently.

Our house combines all the elements that create the perfect intelligent, sustainable house, so we checked the "Sustainable Construction Grand Prize" category as well.