In Situ is a 12.200m² office building, designed in openwork approach designed to create real estate value by increasing the well-being of the occupants and building performance.

One of the panels focuses on the welfare of occupants: triple exposure workspaces, from day one staircase, accessible vegetated patio, hall through room "silence" for work requiring high concentration, variety of workspaces, formal and informal, the air quality monitoring tags, business center on a dedicated floor, concierge service "4 pins".
In Situ is under HQE and BREEAM certification in construction, HQE Exploitation axis sustainable use.

The VINCI Immobilier's commitment is to be "value maximizers": we hope that the use value of every building out of the ground is as large as possible. Not everything is a question of energy performance. We must also consider flexibility, changeability, maintainability, rethink the quality of life in the building: comfort, health, design. Maximize the use of the buildings value, to commit to the development of a sustainable city. Welfare is a pillar of our approach to sustainable development: design sustainable buildings is look at how well occupants will live there. Economic performance, rather than "just" energy, is on track we set for each project, dedicated to creating sustainable value.

IN SITU compose the tertiary center of the island A4 of the development zone (ZAC) Rives de Seine which includes homes, a school and a gym. In an urban and dense environment, SITU was designed as a stack of identical modules which respects the volumes of neighboring buildings by finding a more human scale.
A glass full height and through-fault allows breathing and a vertical break on Yves Kermen street and offers a perspective on the different garden levels located in the heart of the block. The theme of macro-lot, home of biodiversity, finds in this project offices a particular resonance in the creation of outdoor spaces planted at many levels which are extensions of workspaces open space or offices compartmentalised. Common outdoor relaxation spaces and accessible for everyone take place at each level in the fault, and individual balconies are accessible to all levels right from the fault. The landscape grows on the ground in the continuity of landscaped treatment in the whole island.
Designed as a bioclimatic building, solar gains are managed by the volume of the building: south, caps advance to protect from the sun workspaces, while in the North the windows bare module maximizes natural light. The bearings-through are lit naturally.
The building offers flexibility of use with a ground floor designed to welcome, depending on configuration, and without changing its verticality, either two halls for two different users or a hall for a single tenant or multi location. IN SITU offers to its occupants two huge terraces staggered in visual link with the garden terraces built houses and large school roof meadow and offers to pedestrians using the crossing intra block a view of the open garden and in the ground the DRC. Visible from the elevator landings, gateway to the balconies on the south, completely illuminated naturally, the wooden staircase of the fault is widely preferred to the elevator to travel between stages.

Following the delivery of the building, VINCI Immobilier has made its headquarters. Employees of Ile-de-France are now very satisfied with the quality of work and feel of the building spaces. The building is now certified HQE Exploitation. 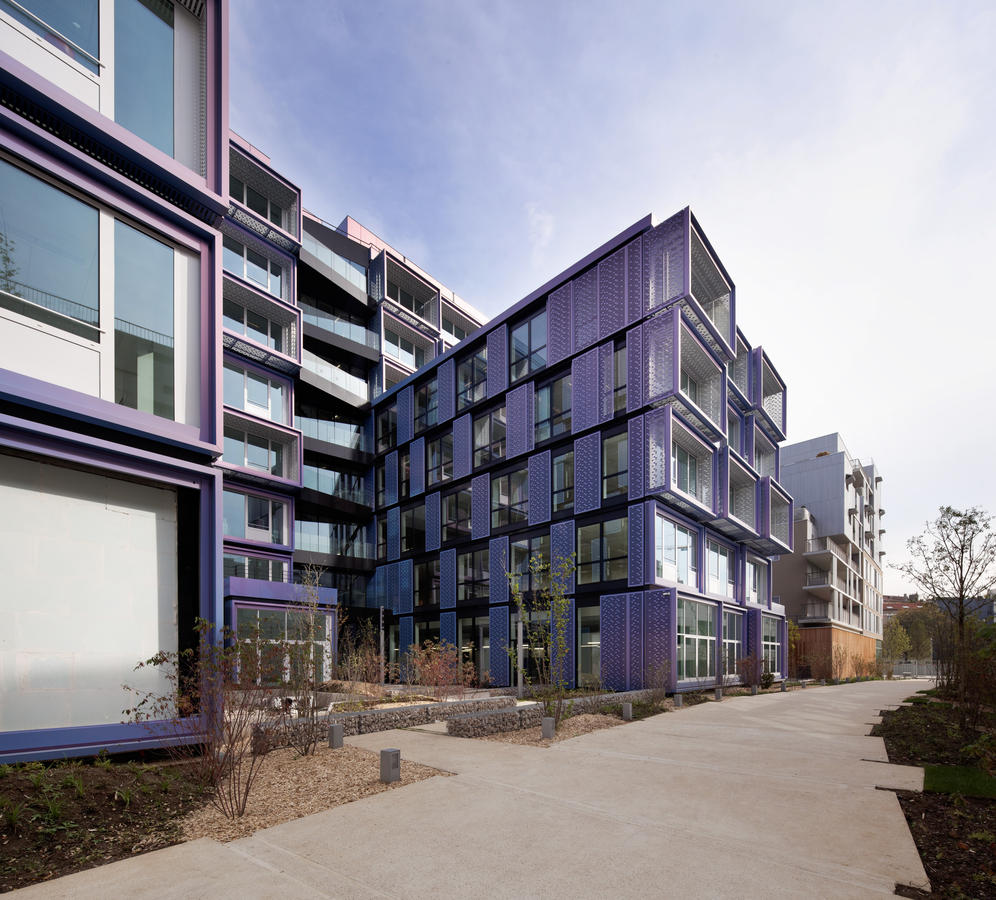 actual consumption are monitored monthly as part of the HQE Exploitation.

Edenkia a contract was soucrit to 25% renewable energy in the mix of electricity production.

Emissions before use correspond to the calculation of lifecycle analysis calculated on the following families: structure / external / roof carpentry. calculation on the entire building was not réalsié. Calculation made from the e ELODIE software

All offices are located along the building facades. 100% of the office spaces have access to daylight. Blinds acrylic textile motorized internal occlusions were implemented on the South facades, R + 1 to R + 7, at each of the inner joinery requiring dimming facility; on the east and west facades, all the offices in the floors RIE ground floor. Sliding shutters were used on the east and west facades, R + 1 to R + 7. The minimum level of illumination in offices is 300 lux. The offices are equipped with recessed luminaires equipped with fluorescent broadcasters and high-frequency electronic ballast providing direct lighting with low luminance. The luminaires in offices are selected so as to avoid glare. Their UGR index is less than 19. The color temperatures of the lamps are between 3000 K and 4000 K in the offices. The color rendition indices are greater than 85 in the offices. The very first day qualitative staircase encourages its use to the detriment of elevators. Balconies and terraces, usable workspace are available to employees, and a “silent” room dedicated to high concentration activities. 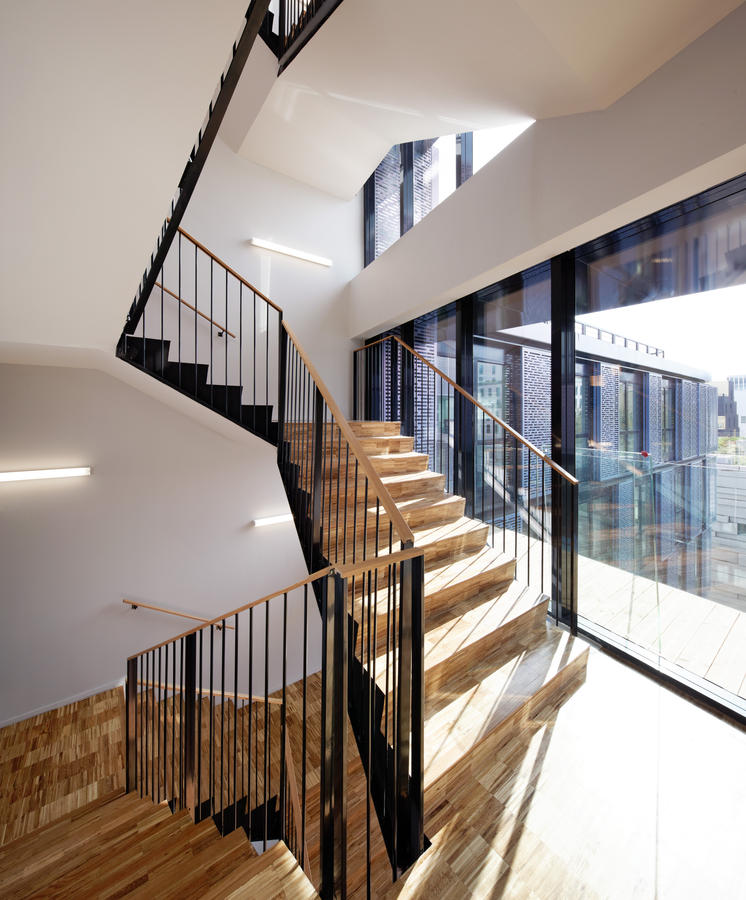 
Openwork approach the implementation of in situ allowed the owner to have a building that can accommodate 1 "means taker" seeking 2 to 12.000m served by a hall of its own where it can deploy its image at will ., the remaining surfaces being assigned to another medium taker or multipreneurs which will have the second hall. in case of single taker, one of the halls is transformed into show rooom, sales area, desk, mini auditorium. side user, the openwork approach allowed to enjoy the benefits of an independent building (hall and dedicated asc) enhancing its brand image while retaining those for a shared building: better amortization of certain fixed charges (netretien contract .. .) for the joint RIE. Moreover, insofar as the surfaces are available, the average policyholder can increase the number of its employees without the need of having to move.

Ile Seguin Rives de Seine, 74 hectares of development operation, unfolds on the old grounds of the Renault factory at Boulogne-Billancourt, in the heart of Paris and Grand Valley Culture. On this magnificent site, in which the industrial past has marked the collective memory, a new district comes out of the ground. Thus, the island Seguin-Rives de Seine gives a second life to a unique territory in Île-de-France.
The operation is divided into three management areas with different challenges:
- Seguin Island (11.5 ha): designed to become an international center for innovation, dedicated to culture and creative economy; open to the public since 2010, it now hosts cultural foreshadowing facilities. The development work of the departmental musical city has already begun.
- The Pont de Sèvres neighborhood (15 + 10 ha): built in the 70s, in full urban renewal to contribute to its isolation and its embellishment.
-The “Trapèze” (37.5 hectares) this area of 37.5 hectares is designed as a diverse and lively neighborhood that eventually will have 12 000 employees and 15 000 inhabitants. The architectural and environmental ambition, the balance between social and free housing, public facilities, offices, shops, parks, etc.) help to create a special place to live. The “Trapèze” unfolds according to a quality public spaces frame: a 7ha park planted 2 great courses and crosswalks network enrich the green areas of the city. Nature and water are everywhere. The realization of the “Trapèze” was done in two phases; the western part, now completed, hosts 4,000 active and 5,500 inhabitants. 2 kindergartens, 1 school group, a media library and 20 shops; the eastern part, which is located on SITU is under completion. It welcomes the assets, people, shops (pharmacy, bakery, butcher, supermarkets, restaurants ...) sports halls, 1 nursery school, 1 church.

2 underground parking levels welcoming 203 parking spaces including 6 VL Electric and 11 seats and two wheelers that an area of ​​71 m² reserved for bikes on the 1st basement.

​The In Situ building is the fruit of Openwork approach, which combines research energy and environmental performance with broader concerns in two areas: welfare at work of future users and the overall performance of the building as real estate assets. This broader vision of sustainable development aimed at reconciling the three pillars, environmental, social and economic, to reduce the borrowing of the project while providing more value to all stakeholders of the real estate chain: the employee at work, the business tenant and building owner. 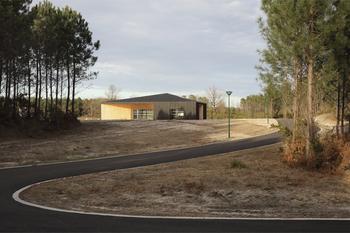 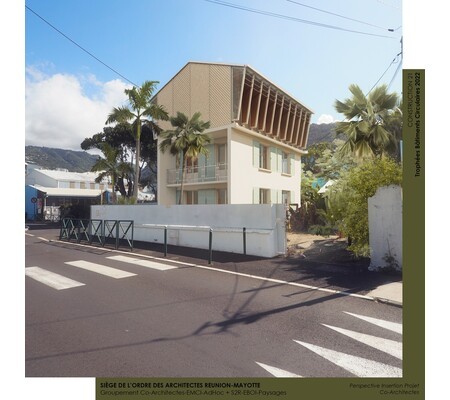 Headquarters of the Order of Architects Réunion / Mayotte 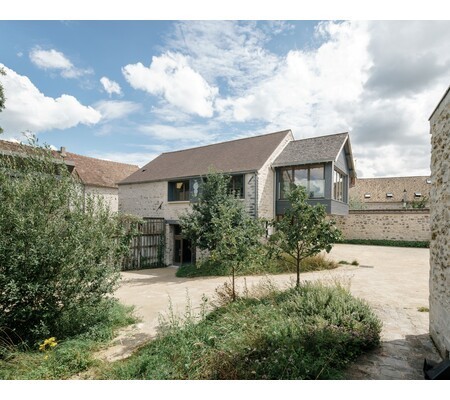 Rehabilitation of a barn in a Third Place 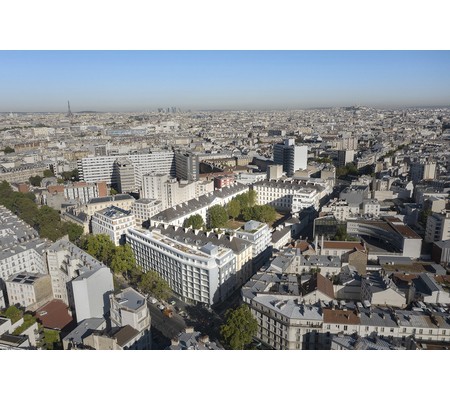 The Barracks of Reuilly 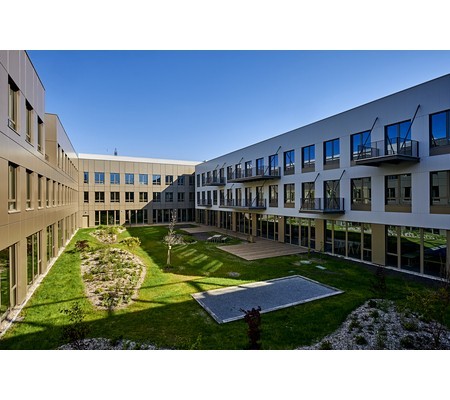 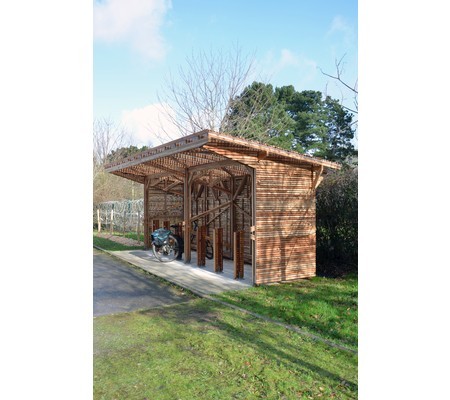