A physical characterization of this waste has been carried out to determine:

Bulk density was determined by using helium pycnometer (AccuPyc 1330_ micromeritics). This method allows to obtain a precise measure of the sample volume. It consists in introducing helium into a reference chamber with a known pressure and then it is allowed to expand into the chamber containing the sample. Thus, the drop in pressure is measured.

The sample volume is determined according to Mariotte law :

Bulk density is then given by the following equation :

The results of bulk density are given in table 1. Two samples are tested per waste, and for each sample an average of 3 measurements is taken.

True density is measured by means of a pycnometer with a countenance of 500 mL according to the procedure described below :

True density is then given by the following equation :

Propanol was selected as an immersion liquid because it is characterised by a density which is lower than that of water thus enabling the feasibility and the execution of the test.

The results of true density are summarized in table 2.

The test consists in drying the sample in a proofer at a temperature of 40 °C until the mass stabilizes. Water content corresponds to the registred loss of mass. It is calculated according to the following equation :

The test was repeated three times for each material. The results of water content are given in table 3.

This test is derived from an experimental protocol developped by RILEM TC 236-BBM group.  The procedure used to measure the water absorption of the different matreials is as follows :

The results of water absorption are given in figure 2. 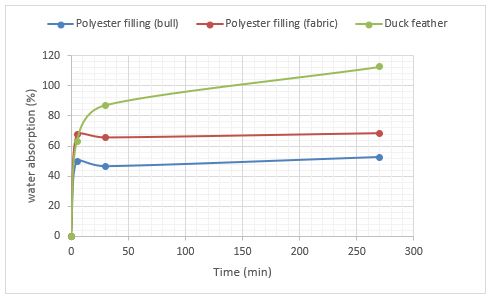 The physical analysis of these raw materials made it possible to have an idea about their properties and also about the possibility of using them as raw materials in the prototypes to be designed. Other raw materials should come from the University of Brighton to characterize them in turn.