Characterization of agricultural co-products for the development of thermal insulation

As part of the Sustainable Bio & Waste Resources for Construction (SB & WRC) project, Unilasalle's goal is to develop a prototype thermal insulation based on agricultural co-products. During the preparation of the project, some resources were preselected based on their availability in the cross-Channel area (from Cornwall to Norfolk, and from the north coast of Finistère to Pas-de-Calais).

The preselected co-products are rapeseed straw, wheat straw and corn stover. Different parts of these stems can be valued. Unilasalle is currently working on the scientific description of each of these materials to achieve a precise selection of materials used in the composition of the insulation prototype:

The different straws are characterized according to the Van Soest method which consists of hydrolysis, in the presence of detergents fractions of straw. Three successive hydrolyses allow the extraction of extractables which consist of soluble polysaccharides (such as pectins, starch and fructans), soluble sugars, organic acids, proteins, lipids - the extraction of hemicelluloses, the extraction of cellulose and finally that of lignin. 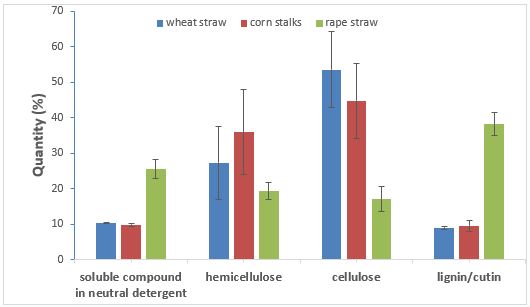 The biochemical profiles obtained (previous figure), such as an identity card of each co-product, show that the majority constituents are cellulose and hemicellulose. These profiles will be interesting to relate to the mechanical properties of the future prototype. 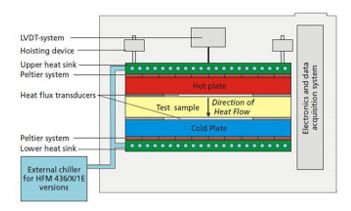 Thermal conductivity analyzes were conducted on co-products of corn stover and rapeseed. The first results are interesting since the values ​​obtained for the maize stalk and the rapeseed stem are between 0.052 and 0.059 W · m-1 · K-1. The results are particularly interesting for maize marrow with a thermal conductivity value of 0.050 W · m-1 · K-1.

These different co-products are particularly interesting for the material targeted in this project. Further analysis should be conducted to further study these co-products, including imaging studies and studies on their physical properties to improve our understanding of their structure and intrinsic organization.