The Vitry-Sur-Seine anti-flood pumping station is a HQE building located in an urban context marked with the railways to the East, to the North, the future SMI (Infrastructure Maintenance Site managed by the SNCF), to the South the A86 which overhangs the field and to the West, an industrial zone. It is the southern end of the ZAC (activity zone) Gare des Ardoines, on the edge of Léon Geffroy street. This architectural and landscaping project is a strong link between the buried civil engineering works allowing the anti-flood pumping of the Seine and the urban district in full renewal. Sign of a green mesh in the landscape, it recreates biodiversity and synergy with the surrounding ubiquitous flows.

The pumping station is an exemplary sustainable building on several points:

- The harmonious relationship of the building with its environment near and far.

- The restoration of biodiversity in an urban and dense environment.

- Constructive choices made for the durability, adaptability and ease of maintenance of the structure

The project responds to the architectural competition launched in March 2015 by the Department of Val-de-Marne to work on the architectural integration of the anti-flood pumping station located at the entrance of the city. The aim was to work on architectural integration in harmony with the surrounding industrial environment, with the future SMI of Metro Line 15 of Paris (Infrastructure Maintenance Site managed by RATP), the A86 overlooking the parcel, the railways of the SNCF (RER C and lines Paris - Orleans) and the end of the ZAC Gare Ardoines. The building also has a social and educational function. Located at the entrance to the city, it helps to sensitize residents to water management and issues related to flooding and the evacuation of runoff water during floods.

The architectural party takes into account the alignment of the facade with Léon Geoffroy street. The volume, the heights and the coatings make it possible to harmonize the technical premises with the future Site of Infrastructure Maintenance (SIM) which borders on the North. The anti-flood pumping station is located south of Lot DK46 Lot B, access being from Léon Geffroy Street, by a truck access door equipped with a pedestrian gate. The above-ground technical rooms have a footprint area of 215.40 m², including the following premises: - Local operating: su 155.00 m² - Local hydraulic central: su 6.60 m² - Sanitary facilities: su 4.10 m² - Electrical room: su 21.00 m² - Local access station underground part: su 7.50 m² The underground pumping station has a volume of 3660 m³. The architectural principle of this technical station is the creation of a simple volume, worked with suitable metal coatings and a green roof to integrate into a urban site in full renewal, valuing the activity zone Gare Ardoines and more specifically the SIM , enriching the biodiversity of this site and minimizing visual nuisance for residents: The total height of the structure built above ground is 8.00 m. - Substructure of the premises in thermo-lacquered aluminum cladding with a smooth and dark ocher appearance, surmounted by a thermo-lacquered aluminum cladding with braided effect, dark ocher effect rust. - Fifth vegetated facade: 147 m² green roof including 28 m² on tray. - 72 ml internal fencing with a height of 2.00 m, delimiting the heavy road. - Fence along rue Léon Geffroy of 2m50 total height in continuity with the future fence of the SMI, and in continuity of the basement of the technical premises: opaque with reliefs of random vertical stripes of ocher hue. - Access gate with double leaves of 7 ml access to the technical station in lacquered steel, ocher tone, height 2.50 m. - Access gate of 1.30 ml and height 2m50, for access to the west of the building. - Circulation areas and access to the pumping station, optimized.

The occupants of the building, the operating department of the Department of Val-de-Marne, are satisfied with this achievement which is isolated unlike this type of building usually. The insulation of the frame by the wood fiber exterior provides thermal comfort and a satisfactory working environment, there is no heat loss and the internal temperatures are well regulated. This insulation from the outside and the green roof also reduce the heat island effect that can usually be observed in dense urban environments.

If the building were to be redone, the agency AR ARCHITECTES would like to propose a more sustainable main structure from the dry sector, wood for example to reduce the use of concrete and the carbon footprint of the building. The AR ARCHITECTES agency would also have liked to work on renewable energies to ensure aeration of the building or even the valorization of the fatal energy in the water process in order to create a source of energy to valorize (heat pump , cogeneration ...).

All the exterior joinery of the above-ground building of the Vitry-sur-Seine pumping station is insulated from the outside with wood fiber, the grid, the double-leafed sliding door, the gate and the double canopy. glazing. The acroteria are also isolated.

It is difficult to estimate the actual consumption of this building because it has been in operation for only two months. This recent inauguration does not allow enough perspective, however outdoor insulation wood fiber and green roof can reduce energy consumption of the order of 40%. These data are confirmed at the operating balance of the pumping station.

The work of the anti-flood pumping station, rue Léon Geffroy in Vitry-sur-Seine, is built near the future Infrastructure Maintenance Site (IMS) of line 15 of Paris metro, in the immediate vicinity of engineering structures of the A86 motorway, and more precisely south of the ZAC Gare Ardoines managed by the EPA ORSA. The site is bordered: - North by the future Infrastructure Maintenance Site (IMS). - South, by the A86 motorway which overhangs the site. - To the east, by the lines of the RER lines C and main lines. - To the west, by Léon Geffroy street (RD 274). Access to the plot is from rue Léon Geffroy to the west of the parcel. The site located in the UP2 area of the PLU of Vitry-sur-Seine, belongs to the Concerted Development Area (CDA) Ardoines Station. The CDA Gare Ardoines is articulated between the inhabited areas of Vitry and the Sanofi industrial site on the edge of Seine. This CDA project consists mainly of an industrial and logistic zone, but also of a residential zone. Public spaces, shops, services, commercial center and the tertiary / residential mix will ensure the constant dynamism of the CDA. 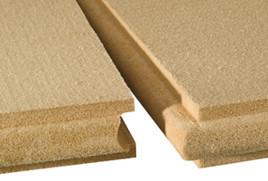 Isolair panels are insulating panels based on wood fibers manufactured using the "dry process" process. Particularly resistant due to their high densities, Isolair panels serve as both thermo-acoustic insulation but also rigid under-roofing and rainwalls behind a ventilated facade with closed joints. Their large opening to vapor diffusion gives the rigid panels a high permeability to water vapor. The Isolair range allows you to enjoy all the benefits of high-performance wood fiber insulation.

This biosourced insulation was chosen by Ar-architects from the beginning of the project design for its low carbon footprint. Other options were presented to Ar-architecture who did not wish to move towards another type of insulation.

Tress' Design © is a new patented method that offers a "braided metal" appearance with many advantages: an aesthetic rendering of great fineness (braiding possible of different widths with or without holes), no risk of pinching or tampering paint, increased resistance.

The aluminum facade is an architectural part, an integral part of the project. The choice of the product was made by the architect who did not wish to use other material.

ECOVEGETAL SUCCULIS is a green roof, it is a creeping and resistant extensive vegetation. SUCCULIS is used for its light weight and low maintenance. The plant cover of the SUCCULIS system consists of different Sedum whose foliage color changes during the seasons. The hue can vary from green to red and the flowers are usually yellow, white, red and pink. It is an ecological protection which advantageously replaces the layer of gravel.

The agency AR-architects wanted to collaborate with Ecovégétal and therefore directed the project management towards this supplier.

The costs presented are exclusive of taxes.
The structure is a complex comprising a part of a rainwater pumping station, a depollution works part (sand chamber and screen), a protection part of the stormwater sanitation network against floods (isolation valve ) and a rejection part in the Seine (siphon under railway tracks laid in micro-tunneling). The visible part, the building of exploitation, represents less than 10% of the final cost of the work is 1 250 000 € HT.

For the building of the anti-flood pumping station of Vitry-sur-Seine, several eco-materials have been used: - Wood fiber as insulation, is an ecological and biosourced material. It allows thermal and acoustic insulation of the building above ground. - The green roof as the fifth facade also allows to isolate the building and develop biodiversity. - The aluminum facade cladding is a removable and recyclable material, it contributes to the sustainable appearance of the building.

The Vitry-Sur-Seine anti-flood pumping station is a low carbon sustainable building designed following an HQE approach and the priority targets mentioned below that have been developed throughout the project:

Target 1: Harmonious relationship of the building with its environment
Quality of outdoor spaces for users:
• The bias is to propose a treatment of the facades of the projected building by the use of biodegradable materials, such as aluminum.
• Views on natural areas: green roof and vegetated hollow slabs
• Limitation of visual nuisances caused by the exterior environment
• Architectural integration of the building into a global project of the ZAC (activity zone) Gare des Ardoines
• Limitations of the nuisances generated by the operation of the site for residents: optimization of the interfaces

• Restoration of a biodiversity thanks to the green roof and the bins on plots. The aromatics and sedum planted favor the arrival of insects and birds such as bees, butterflies, beetles.

Target 2: Integrated choice of building products, systems and processes
• Constructive choice for the durability, adaptability and ease of maintenance of the structure: Oversized aluminum cladding (2/3 of the high façades) and smooth ocher-colored aluminum (1/3 of the basement façades) ) (Métaldesign concept), accessible and vegetated roof terrace (pots on plots aromatics plantations) and roof terrace planted with sedum (ecovegetal), insulation of all facades and wood fiber roof (from Pavatex)

Target 5: Water Management
• Treatment of rainwater roofing by 2 systems: bins on vegetated plots present around the acroterium. A vegetated cover in sedum covers almost the entire surface of the roof. Rainwater is managed by vegetation and transported to the decent rainwater located at the corners of the building.

• In case of heavy rains, the waters of the city of Vitry Sur Seine are transported to the Seine; the work buried beneath the building makes it possible to recover the city's rainwater that is led to the Seine by means of a pump. This device can fade against the risk of flooding the Seine in case of rain and flood. Thus the basin allows to return the pumped water in dry period.

Target 8: visual comfort
• Visual comfort is ensured by the glass roof of 8m² located on the green roof. It brings natural light into the building and thus decreases its lighting needs. 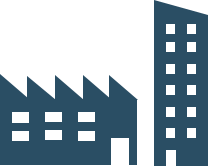 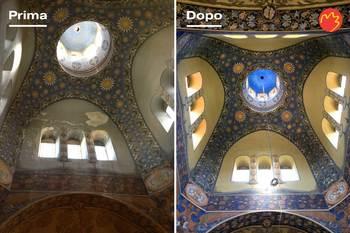 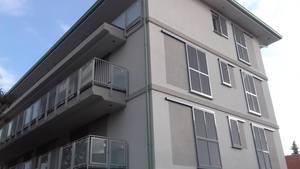 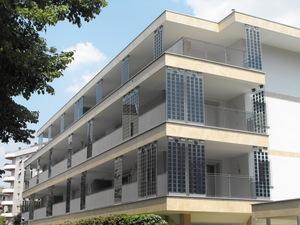 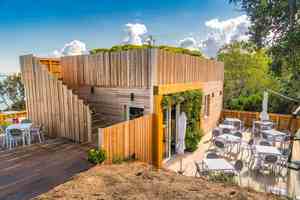 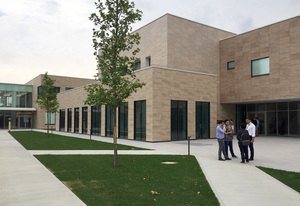