The project benefits from an AFD loan (French Development Agency) of 30 million euros and belongs to restoration of biodiversity supported by AFD since 2014.

The project foresees 18 actions of ecological restoration, hydraulic, ecotourism, development of the local heritage or scientific monitoring in the framework of the creation of a "national park of the Changyuan river wetlands" on 900 hectares, of which 460 ha are wetlands.

The project is located in the heart of the Loess Plateau in Shanxi Province, a wetland-poor region subject to erosion. Of the 234 animal species and 428 plant species found in the national park, 27 are on the red list, including some of the most endangered and emblematic species such as black stork, golden eagle, great bustard and mandarin duck.

The project is therefore essential to safeguard this ecological heritage and improves the resilience of the local ecosystem and better adaptation to climate change.

The invitation to tender for the design and construction of this national park was won in April 2016 by a FrancoChinoise team composed of:

The main designer, Thierry Jacquet, landscape designer and Phytorestore, who are the representatives of the design team composed of French and Chinese partners: the SMEs Hydrétudes, Tecsol, Paratronic, Naskéo, Sage Environnement, Marcanterra, and the Chinese Institutes Zhaoyang and Sinohydro Bureau 11 for carrying out the execution plans, the Chinese IPPR company, which is a large class A institute based in Beijing.

In the past, the Changyuan River had a permanent bed, where water constantly flowed. However, during the last decades, the bed of the river has been particularly degraded, leading to the disappearance of most wetlands. The permanent bed has also

disappeared for more than 11 km. The sand of the bed has been used by the glass industry, very famous in Qixian. Alternating droughts and floods have also degraded soils by salinizing them. Its location in the great plains of Loess in central China where wetlands are scarce makes it a particularly important place for biodiversity.

That is why restoring a permanent river bed and associated wetlands was essential in order to allow the return of protected species for birds and restore plant biodiversity.

This restoration project is structured around several axes:

​Originally, the Changyuan River had a permanent bed and many varied landscapes described by great writers of the Chinese literature. It was composed of many wetlands and was home to a great biodiversity and many wetland plants. However, during the last decades, the river bed has been particularly degraded. The main objective of the project is to restore wetlands and recreate a permanent riverbed through a new flow control. From now on, the river benefits from a regular monthly water inflow of about 180 000 m3 / month and the

losses were limited to between 7,000 and 50,000 m3 on average per month depending on the season. The water of the river, preserved by the

Zihong Dam with a capacity of 12,000,000 m3 is also used for Qixian's drinking water and agricultural activities and

The particular climatic conditions of this region with heavy rains in summer and a long drought period of six months make that there are strong variations of water. This is why different ecological solutions have been used according to the typology of the river bed: permanent bed, secondary bed and upper bed. Several sealing techniques make it possible to seal the 900,000 m² permanent bed with local clay and membrane. This permanent bed is essential because it ensures the presence of water in the river during all seasons.

The bottom of the riverbed is being renaturalized over 11.5 km, including 1,500,000 plants, such as Miscanthus sinensis, Phragmite australis, Typha orientalis, Lythrum salicaria or Schoenoplectus tabernaemontani.

Water quality is a key point for a total restoration of wetland biodiversity related to the river. In this case, using the technique of artificial wetlands, or filtering gardens, is a nature-based solution that promotes the wild life. This is a good example of the role biodiversity can play in addressing water quality issues. The pollutants are naturally biodegraded in the rhizosphere, that is to say in the root network of the plants in the artifical wet zone. This is made possible by the associations of different types of aquatic plants (such as lotus and sedge by example).

​The museum and botanical garden express the importance of the Changyuan River and its biodiversity in Qixian's natural and cultural heritage.The eco-museum is a contemporary rewrite of the traditional architecture of the region. The ecomuseum's design is a reinterpretation of the typical Qixian closed courtyards model, with a wide entry hall, a large garden and pavilions. It consists of a main building of 2000 m² and two pavilions of 500 m² each. The garden plays with the windows and openings that characterize the traditional gardens of southern China. For this

ecomuseum, the garden is open and a series of brick walls will create a contemporary opening and closing visual effect.

The 3-hectare botanical garden is inspired by the 20 landscapes described by Wang Wei, local poet of the Tang Dynasty. The 20 landscapes are reinterpreted in 20 specific ecosystems that can be found in the Chang Yuan River and its wet areas. Thus, each space of the botanical garden is the ecosystem reinterpretation of one of the scenes described by Wang

Wei, like the lakeside pavilion, the bamboo covered hills, or the cherry blossom pavilion.

This garden is also an opportunity to recreate typical ecosystems of the river, which have nowadays disappeared, with some species of bamboo, grasses, trees and shrubs that will be relocated gradually into the river when its floors will be repaired thanks to the presence of permanent water.

Thus, it is also the starting point that will allow these plants to regain little by little the various spaces of the river and to repair the soil permanently.

The museum participates in the conservation of local human and natural heritage through the constitution of a detailed scientific collection of fauna and flora in particular. A collections maintenance area will also eventually create exchanges and participate in the network of ecomuseums in China and internationally in accordance with international standards defended by ICOM and ICOMOS.

Many games for children have been made and concrete collections of fauna and flora. The use of computer screens is intentionally restricted. The goal is also to transmit and make envy, especially to the youngest, to discover for themselves the biodiversity of the river and protect it in the field and not in front of virtual images. but also services that biodiversity makes to the local economy, whether through soils, building materials or agriculture.

The ornithological park of Jiugou, with an area of 22 ha, is the first park in China to have been designed according to the Western model such as the Marquenterre ornithological park, in the Bay of the Somme. It is above all a place specifically designed to provide ecological habitats for sustaining birds. It is therefore neither a nature reserve to be observed from a distance nor a zoo. The park is designed so that visitors are closer to the birds in the most natural environment possible while enjoying a good infrastructure (observation tower, shelter for bird watching up close, paths and pontoons).

To attract as many birds as possible, the project was inspired by existing local ecosystems that have been restored to provide a wide variety of ecological habitats: banks, reeds, dry grassland areas, shrub areas, forest areas, wet meadows, flood plains, permanent ponds, isolated island, dead woods and branches, wooded areas on the side of the loess cliffs, etc., each time with local plant species ...
The observation tower is 18 m high and 250 m², offering views of each of these ecosystems and bird watching without disturbing them. Recognition panels of the different species likely to frequent the site are posted in the six floors of the building.
The park offers several hiking trails, including a ring circuit that connects viewpoints and observation posts. The trail is hidden by hedges to minimize the impact on the birds. Trails can be closed depending on the season or nesting season for example. For the same reason the park can accommodate up to 400 people at the same time, or 1.5 people per 20 m. The objective of annual attendance is thus estimated at more than 500 000 people, which allows to generate an income of approximately 800 000 € only thanks to the tickets of entrance and thus to create local jobs and to ensure a good management of the park Ornithological, which will then have a good capacity for self-investment.


​This restoration project is structured around several axes:

​900,000 m² of river have been waterproofed in order to save 2 million m3 of water per year. The banks have also been renaturalized with 1,500,000 local wetland plants in the riverbed.

​The owner is Qixian District (about 350,000 inhabitants), represented by the "Management Committee of the Changyuan River Wetland National Park" and its Chairman Mr. Wang. The project benefits from an AFD loan (Agence Française de Developpement) 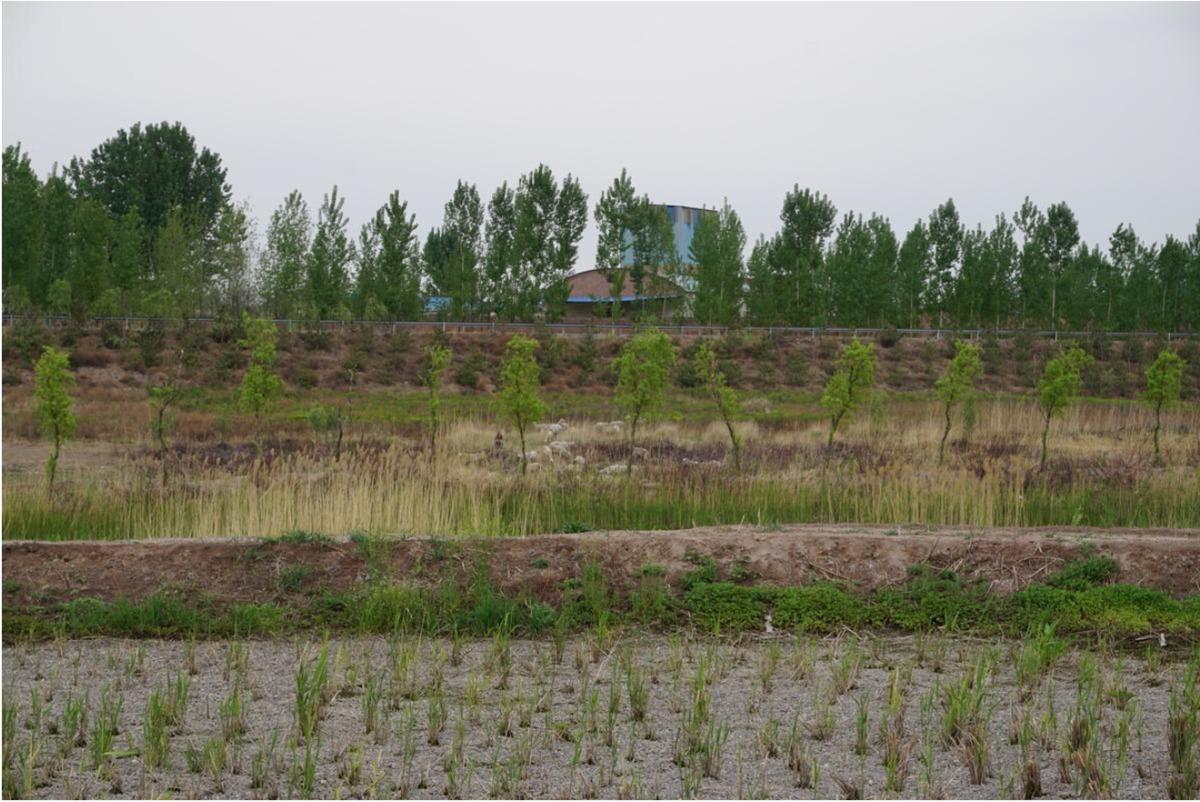 ​Restore nature by nature, including a 2 hectare vegetable filter garden that can treat 10,000 m3 of waste water per day. The treated water reaches a level that allows it to participate in the ecological restoration of the river and its wetlands. The water output reaches quality 1A, the best regulatory quality set in China.