Labeled "Nouveau Quartier Urbain" (New Urban District) by the region Île-de-France, Clichy-Batignolles is one of the eco-districts in which the City of Paris is implementing an ambitious policy of sustainable development, expressed in particular by its Climate Plan and Biodiversity Plan .

In the 17th arrondissement of Paris, a new place of life grows on the former Batignolles railway site. On 50 hectares, this sustainable neighborhood combines all components of the mixed city (offices, housing for all, businesses, facilities) in an environment made particularly attractive by the presence of a 10-hectare park.

The development project is based on strong choices:

Clichy-Batignolles occupies an outstanding position in the articulation of several Parisian neighborhoods, a particularly dynamic  north-western quadrant of the Parisian metropolis that is about to benefit from a considerably strengthened accessibility to public transportations.

The Clichy-Batignolles project is spread over 54 hectares between the rue de Saussure, the Peripheric Boulevard, the avenues of Clichy and Porte de Clichy and rue Cardinet.

A strategic and dynamic sector of the Parisian metropolis

Clichy-Batignolles is also part of a triangle connecting the central Paris business district La Défense and Plaine Saint-Denis. Urban modernization dynamic that plays in the Northwest Paris gradually erases the administrative boundaries and the barrier of the Peripheric Boulevard in favor of new metropolitan polarities including the nearby cities such as Clichy and Saint-Ouen.

In the articulation of these territories, and soon distinguished by the presence of the new Paris courthouse, Clichy-Batignolles, while giving priority to housing for all, shows a tertiary vocation in a highly residential context until now.

Amount of the investment taken in charge by the local authorities

The City Hall of Paris guarantees the overall consistency of the project. It finances and ensures the project management of public facilities (schools, highschool, kindergartens, gymnasiums ...), the Martin Luther King Park, the establishment of the pneumatic collection network, the redevelopment of the rue Cardinet , as well as future crossings of the railroads.
The city of Paris is also a co-project owner, with RATP, the extension of the tramway T3 from Porte de la Chapelle to the Porte d'Asnieres and participates in the financing of the desaturation of the line 13 by the extension of line 14.

The urban project was designed in a comprehensive way on the whole area (54 ha) by the urban planner and architect François Grether and the landscaper Jacqueline Osty, under the authority of the City of Paris. Legally, its implementation is carried out in the framework of two Joint Development Zones Cardinet Chalabre and Clichy-Batignolles, and a settlement on the urban island Saussure. SPLA Paris Batignolles Aménagement is the developer of the two zones. Espaces Ferroviares, a subsidiary of SNCF, is in charge of the urban island Saussure.

Operationally, the project realization is organized into five sectors in respect of the overall project.

The SPLA Paris Batignolles Aménagement was created in April 8, 2010 by the City of Paris and the Department to lead the development project of Clichy Batignolles. The SPLA led the studies and coordinated all stakeholders on the site.

Coordinating architect. He won in 2004 with the landscaper Jacqueline Osty and OGI, technical design office, the project management consultation launched by the City of Paris for the development of the operation Clichy Batignolles (54ha), which he accompanied for 8 years for the realisation of the project.

Assistance to the contracting authority

Clichy-Batignolles has several buildings or structures involved in memory and imagination of the site. Behind the Ateliers Berthier by Charles Garnier are the remains of the former bastion of the walls of Thiers, which will be highlighted by the creation of a landscaped area. Also preserved, the Pont Cardinet Train Station, the clock building, the forge that will host a food court in the park or a large hall to be eventually reinstalled inside the park.

With 3,400 housings, Clichy-Batignolles contributes significantly to the housing production effort in Île-de-France. This is the only transaction of this magnitude in the western part of Paris. The diversity of its offer will meet multiple demands, especially those residents who face most difficulties to stay in Paris: frail elderly, students, young professionals, families in need of spacious apartments, modest households. At least half of the surface is intended to social housing, accessible to the poor as well as middle class. 20% of the remaining units will be have controlled rents and 30% for accession.

About 7,500 people from various backgrounds will live in Clichy-Batignolles and 12,700 people will work there. To these people will be added the 5000 daily visitors to the courthouse, and the many park users, customers and spectators of the future cinema or the Odeon Theatre (AteliersBerthier) located north of the site on the boulevard Berthier.

The social integration clause is systematized on all works contracts awarded by the developer and on the sites of real estate units it sells. At least 5% of the hours worked on each project must be carried out by people in a position of insertion.

At each stage of the project, workshops, "open house" days, urban walks, site tours, discussions facilitate an open dialogue with citizens and enrich their knowledge of the project area and expertise of use. This consultation is under the vigilance of a guarantor, whose role is to facilitate dialogue between the stakeholders of the project and ensure mutual listening and expression of all. He is responsible for the synthesis of the work of different groups and their feedbacks during the plenary assembly of the project.

Today they accompany reflection architects on new sectors in the design process: the Avenue de la Porte Clichy and west of the park. Workshops are also devoted to monitoring sites.

They associate the people in the choice of architectural projects of the Technical Commission contests the jury and involve them in the monitoring of projects until the filing of building permits.

The meetings of "Clichy Batignolles"

The House of the project, the "open house" day , site tours, urban walks allow people to follow the progress of the project and to dialogue with project stakeholders (architects, planners, developers, city of Paris and operators).

20% of controlled-rent private rental housing, 30% of free housing whose essential in accession

Railway maintenance activities, which occupied the space very extensively, tightened along the Saint-Lazare railroad under a slab overhanging railways, base of future buildings. Other activities (concrete plant, freight center, waste sorting center, parking for coaches) will be concentrated north of the site, along the peripheric boulevard and railways. They will thus be directly connected to the transport infrastructure to prevent truck traffic within the city.

The Clichy-Batignolles project aims to reduce stormwater discharges by 50% into the network compared to a conventional project, in order to minimize the risk of network saturation and pollution of the Seine. The presence of a large park, the small surface area of ​​roads, green roofing and island hearts promote natural infiltration of rainwater. Water management is made by the plot. In the park, when there is too much water to seep directly into the ground, it is recovered to feed the pond biotope. These waters cover 40% of the park's irrigation needs, which are quite moderate.

The creation of new roads is deliberately limited (12% of the area). The pressure of the automobile and soil sealing are well contained, commercial animation is focused on a new north-south axis parallel to the rail beam and connected to the existing major axes that surround the site.

All waste (except glass) will be an automated through an automated process through an underground pneumatic network. This is one of the first projects of the kind in France and Paris first. The waste will be transported to a collection station located on the boulevard Douaumont, and then redistributed to the corresponding processing and recycling industries whose neighbor sorting center. This eliminates the flow of collection bins in the area and significantly reduces pollution.

The automated pneumatic collection reduces by 42% the emissions of greenhouse gases, 98% reduction in carbon monoxide, 86% of nitrogen oxide emissions and 90% particulate emissions.

Automated vacuum collection
In partnership with Envac, the world leader in automated collection systems, Veolia has developed this solution.
The automated pneumatic collection is to deliver household waste, underground path from fixed collection points to a compaction unit. A truck then transports the compacted waste to their treatment site.

This collection has several advantages:

The creation of a large park of 10 hectares, is airing a Parisian northwest, which was lacking of green spaces until then. Open and crossing, this new space closer neighborhoods Batignolles of spruce, Monceau Pereire and Hauts-de-Malesherbes. The park is indeed designed as a bridge between the gates. Its aisles are located in the extension of existing streets; it offers 14 inputs and outputs, connecting together the rue Cardinet, avenue de Clichy Boulevard Berthier.

The park, a new vision of nature in the city

In the Martin Luther King park designed by the landscape architect Jacqueline Osty, fauna and especially rich flora thrive around a wet ditch and a biotope pond. This green network will be a major asset for the maintenance of biodiversity in Paris. Apart from the actual park, protection and development of biodiversity go through the various plantations along the roads, the hearts of landscaped island and green roofs. Environmental requirements notebooks impose biodiversity coefficients calculated from the vegetation of horizontal and vertical surfaces of projects.

The atmosphere of the park spreads beyond itself by the presence of plants in roadways where that line the lead there. Existing large axes, rue Cardinet, avenues Clichy, Porte de Clichy Boulevard Berthier, are reclassified as urban avenues.

The thermal performance of buildings will reduce consumption required for heating 15 kWh / m2 / year and overall primary energy consumption will be less than 50 kWh / m2 / year, without taking into account local renewable energy (geothermal and photovoltaic).

The energy required for heating and hot water come primarily from geothermal (holes in the web of the Albian). Finally to move towards carbon neutral the whole operation, incompressible electricity consumption will be partly offset by a photovoltaic power. The 40 000 m2 of photovoltaic roofs spread over the different buildings should produce around Mwh 4500 / year.

Creating an architectural witness of his time

Clichy-Batignolles encourages the creation and architectural diversity. The future district that wants to offer the best of contemporary architectural designs, in a context of very high environmental requirements and reflecting the cultural and aesthetic plurality of the present. The terms of design vary according to the context and issues to different sectors. On the east, the islands cut and connected to the existing fabric, each project was the subject of an architectural competition. The western part, carries a skyline challenge especially with the integration of a linear height and nearly 600 m facade on the park and the rail network is collegially developed as part of a workshop bringing together project owners and contractors involved.

The requirements specifications strongly encourage the use of renewable materials. Some materials are prohibited, such as PVC. For others, the labels are required (paints, wall coverings, carpets ...). Building owners are required to assess the embodied energy of buildings and respect a ceiling value.

The developer has set up a charter yards low pollution and low environmental impact, it applies to its own sites as well as all real estate operators involved in the project. This charter provides in particular that at least 30% of waste each job is recovered or recycled. 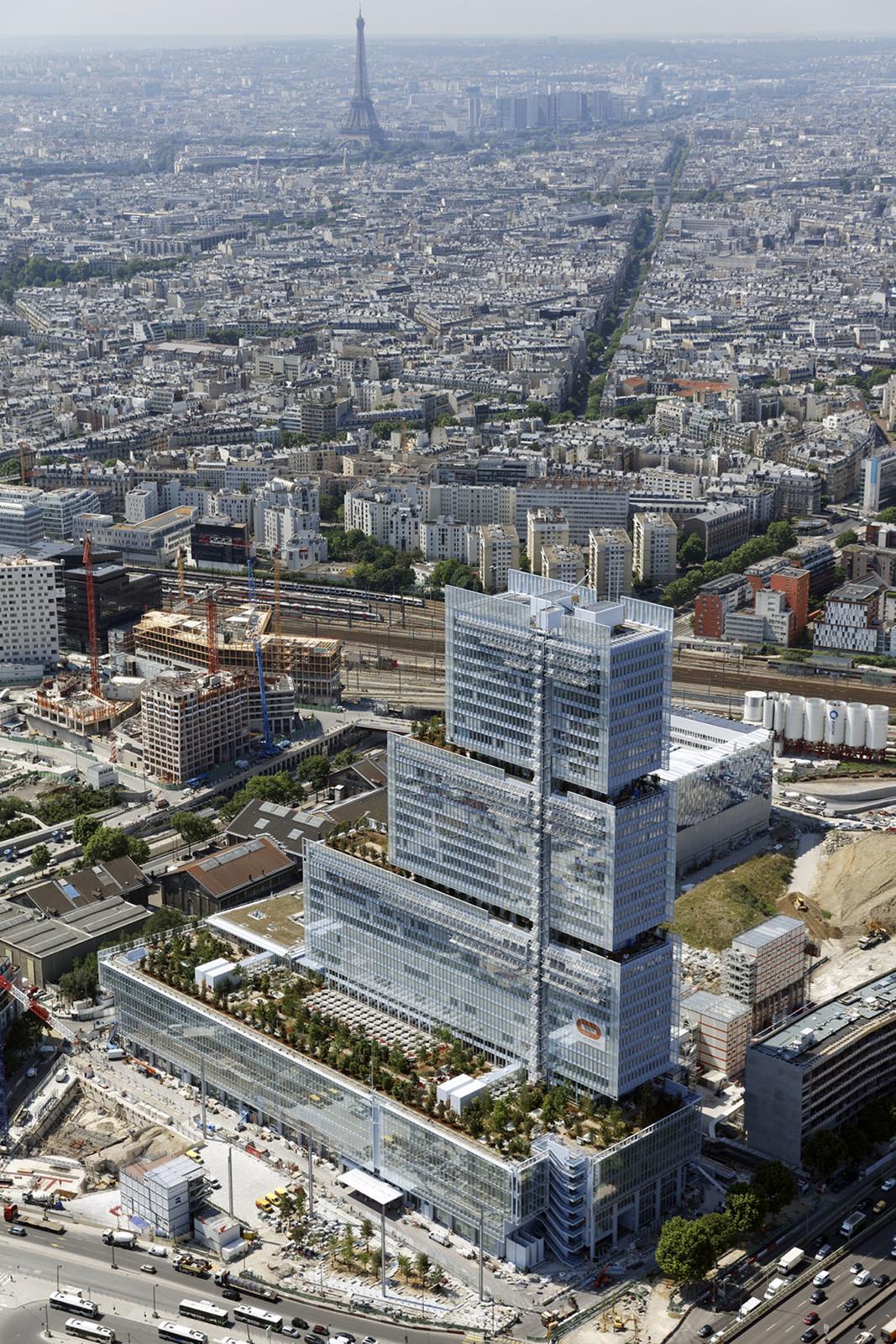