Energy rehabilitation of residential building in the Lourdes neighborhood in Tudela

ECO-CITY of Tudela (2006-2011). Project within the framework of the Concerto Program, an initiative of the European Union that supports local communities in the reduction of CO2 emissions. Through improving Energy Efficiency and Renewable Energy inclusion.

In this action the European partners of the City of Tudela are the cities Helsingor (Denmark), Helsingborg (Sweden) and Trondheim (Norway).

The Lourdes Renove project is conceived as the first fase of a global project of Integral Energy Rehabilitation of Lourdes Neighborhood, a social housing neighborhood,  promoted between 1954 and 1972, with very basic building systems (lacking thermal insulation of any kind) and where autoconstrucción processes have taken place.

Construction conditions of buildings and accessibility problems have placed this district on the lower side of the housing market of Tudela, which has originated that in recent years, as the original, very old, population of the neighborhood is lost, a phenomenon of depopulation and concentration of immigrant origin is happening.

From the energy point of view, we highlight the energy ineficiency, both for buildings and facilities; in particular the central heating of Juan Bautista, which served 31 full service portals.

Working class neighborhood created by the Jesuits in the 50-60 as a solution to housing problems for people coming from the countryside to the city. The building systems are very basic (lacking any kind of thermal insulation) and autoconstrucion has been a frequent process.

Construction conditions and accessibility issues, have placed these buildings on the lower side of the housing market of Tudela, which has meant that in recent years, as the original, elderly, population is lost, a phenomenon of concentration of immigrant population is taking place. They are finding vulnerabilities and even loss of neighborhood identity.

The crisis has hit very strong in this neighborhood that has slowly been losing quality of life in the area and the environment.

The action aims to regenerate the area based on a series of actions at urban level, mixed management: public and private and solution accessibility and energy improvement of housing by performing pilot building projects and change the energy system and improvement of boilers to return to regain a sense of identity.

Lourdes district is characterized as a working-class neighborhood and has been severely beaten by the current economic crisis. In this sense it was essential to find a financial model that would allow the project Lourdes Renove. So that in parallel to the process of architectural competitions, and prior to any contact with the Community of Owners, was sought:

- The maximum financial support by the different administrations (Europe, Departments of Government of Navarre and Tudela City Council).

- Financing the whole performance. Offered by the CAN (Caja de Ahorros de Navarra), 100% of the investment, and part of funds from the EIB.

So that the average percentage of aid in the Project Lourdes Renove rises to 59.50% of the investment.

Amount of the investment taken in charge by the local authorities

MY CITY OF TUDELA

This is a local entity is structured in five areas: Promotion of the City; Economy and Finance; Planning; Social Services and Quality of Urban Life. Each area in turn has administrative units whose project objectives are exposed in different sections.

MY CITY OF TUDELA

The Lourdes Renove project is conceived as the first phase of a Global Project Comprehensive Energy Rehabilitation of the District of Lourdes, which is a neighborhood of social housing promoted between 1954 and 1972, with very basic building systems (lacking any kind of thermal insulation ) and in which there have been frequent constructive processes autoconstruction. Conditions of buildings and accessibility issues have placed this neighborhood in the lowest band housing market in Tudela, which has meant that in recent years, as the original population of the district is lost, very old, it is producing a phenomenon of concentration of population of inmigrant origin. From the energy point of view, energy inefficiency highlight both the buildings and facilities; in particular district heating San Juan Bautista, that served a total of 31 portals with 486 homes, and that was at the end of their useful life. All this originated that were located and locate many cases of the so-called "energy poverty"; .In this context the City of Tudela, convinced the (environmental, economic and social) benefits of the Energy Integral Rehabilitation firmly committed to carrying out Global rehabilitation process that combines all aspects involved, and mark quality guidelines for future rehabilitation of the rest of the neighborhood. To do this it chooses to act, both in the public space, and in the private space, at the level of portal and facilities Barrio, always based on criteria including energy savings.

This project shows that the processes of Integral Rehabilitation Energy Barrios are possible and are the guarantee of a quality future for these areas of the city; and it is essential for them to have a strong involvement of all public administrations and residents themselves. Along with the involvement of technicians and companies in the construction sector. The quality of life for the residents can be improved by improving accessibility and good thermal comfort.

It is a remarkable fact that the Lourdes neighborhood, despite being one of the neighborhoods that has a more marked identity, is undergoing a gradual process of deterioration, so it was decided to act to reverse this process.

The Integral Rehabilitation of 50s to 70 neighborhoods, within a consolidated city are very complex processes from the technical, urban and financial point of view, but above all a highly complex social management. This complexity is accentuated by the aging of part of the population, and the fact that in these areas there is generally a concentration  of the lower strip of the housing market, usually occupied by immigrant population, sometimes in social vulnerability.

To develop this project, a strong leadership of public administration has been applied, the role played by architects, administrators, neighborhood associations, owners and especially THE PARTICIPATION OF THE NEIGHBORS.

There has been an important outreach and awareness effort, to show the whole population that Integral Rehabilitation is the challenge of the moment it is how to ensure a quality future for the neighborhood. In addition a process of consolidation and entrenchment of the neighborhood is favored.

All private projects undertaken within the Lourdes Renove were directed to the Community of Owners, being these the ones with major problems in reaching agreements to implement the rehabilitation works and therefore in need of more support.

The Lourdes Renove project and Lourdes Renove office and all agents that carry out the project, have made an effort to access the whole Community, to clearly convey the information generated.

To work the issue of social inclusion, Kamira company was been hired to draft a Participation Plan and Social Revitalization. Within this plan there have been developed dynamic activities aimed at the entire district, such as workshops, seminars, a "mosqueo campaign", editing a video ... It also has worked with specific associations such as the Association of Women or the day care center in the neighborhood.

Also aware of the serious economic situation of the neighborhood all economic means available to achieve the maximum level of aid hav been movilized. Funds from Europe (Concerto Program), Aid for Rehabilitation Department of Housing Government of Navarra, IDEA funds managed by the DRIEMA the Government of Navarra and funds from the City Council of Tudela, which was implemented through a coordinated Aid ordinance.

Regarding the Ordinance aid approved by the City of Tudela, in addition to general aid work aimed to all the Communities of Owners, special grants were approved as extraordinary situations Precarious Aids, aimed at sector the population with greater economic problems, which are intended to reduce labor costs owners with fewer resources.

The performance involved the creation of jobs during the works on the neighbors who were unemployed.

"We have opted to revitalize a sector hit hard by the crisis as the construction sector  betting on comprehensive rehabilitation. The rehabilitation of neighborhoods will be the future and the great commitment of many entities for local development".

Integral renovation of the heating San Juan Bautista. Since it was found that the main problem of the facility was placed in distribution networks, the scope of the project was reoriented.

Promote the inclusion of new models and companies (energy supply companies) to minimize investments to be made ​​by the neighbors.

Allow the survival of this facility, which was at the limit of his life, through a comprehensive renovation and inclusion of renewable energy (biomass).

Show society that Neighborhood heating, in good condition, and applying current media facilities are very efficient, and easily allow the inclusion of renewable energy. With the ultimate goal to promote the extension of this model to new areas of the city, in a country like Spain, where these facilities are relatively rare; and because of the bad press that buildings from the 60-70 years have.

In short, it seeks to boost the performances of renewal on these obsolete facilities to prevent loss, showing the advantages of these systems so that they expand territorially bringing together a large number of buildings in both urban land consolidated and new developments.

INTEGRAL RENEWAL OF THE HEATING OF SAN JUAN BAUTISTA. It was a district heating system (district heating), that serviced a total of 486 homes and 31 portals, including 2 building types: residential blocks compact between party ("Blocks 60-70 years") and a serial exempt towers ("Las Torres"). With a heated built area of 40.448m² approximate.

This heating was at the end of their useful life, with significant operating problems in production and mainly in the Distribution Network; with significant leakage problems, imbalances installation, ... as well as problems caused by the original design of the facility. 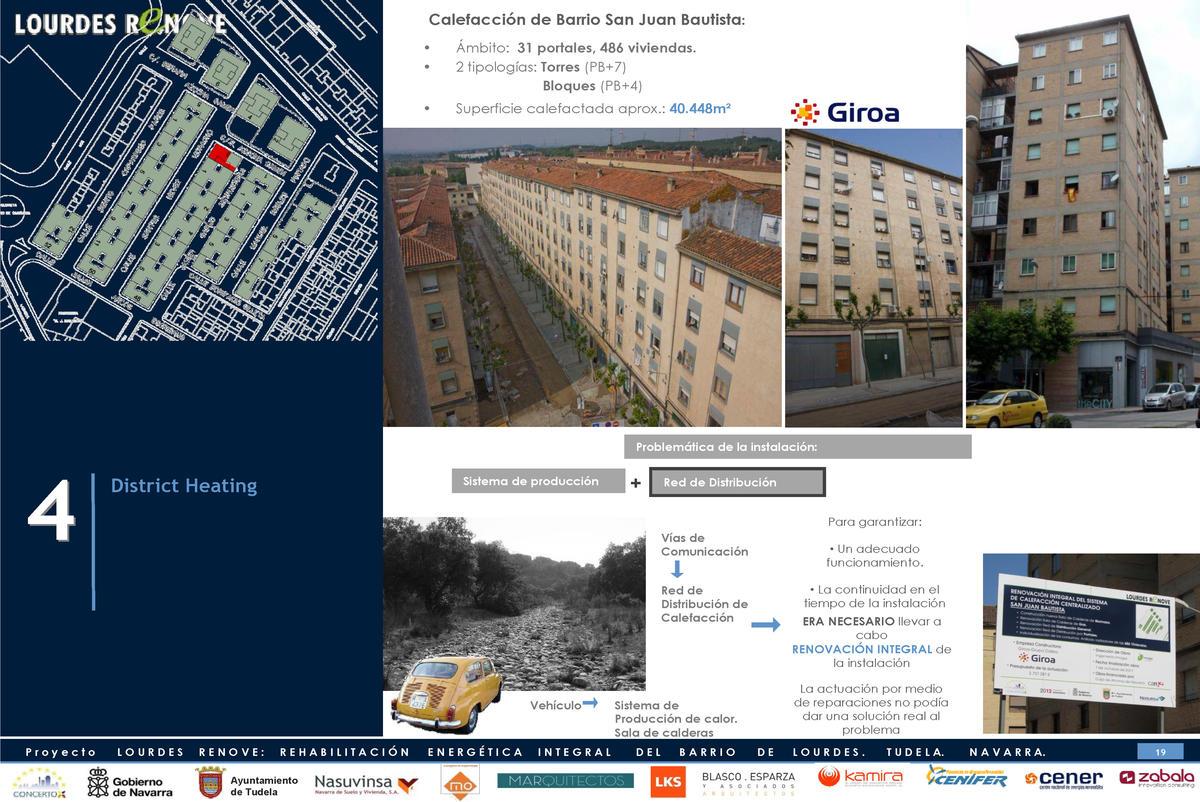