It is not so uncommon to come across examples of steel frames that give rise to great reuse operations. It must be said that the steel construction readily evokes a 1:1 scale Meccano game, which invites you to assemble and disassemble various structures. But few projects push this logic as far as in this kitchen project for a music festival in Canada.

The Winnipeg Folk Festival is a 5 day festival that takes place annually. The client entrusted the architects of the Monteyne office with the mission of building a large kitchen that could serve as a gathering point during the festival. The client, sensitive to the principle of leave no trace, wanted a building that could be easily disassembled the day this space would become useless. This intention was combined with the environmental and aesthetic motivations of the architects, who quickly turned to reusable elements.

The designers based themselves on structural elements taken from an abandoned warehouse in Winnipeg and about to be demolished, which they used as a kit of elements to be reassembled freely. The project also incorporates old electric poles, used to support an outdoor portico. The terrace was made with local wood and corrugated metal sheets, which although new, come from a surplus. Everything has been assembled taking into account a future disassembly.

The site presented few unpleasant surprises because, from the sketch phase, the architects designed the project from the materials of which they had noted the exact dimensions. A stability study office checked the suitability of these elements for their new destination and confirmed the validity of the design options.

The end result highlights the patina of the elements while presenting an original variation on the theme of the steel framed warehouse.

The electricity for the operation of the kitchen and the lighting comes from the public electricity network. Power is generated using hydroelectric dams throughout Manitoba operated by Manitoba Hydro, the provincial electric utility.

The main function of the building as a kitchen operating for five days in summer allows the building to be light and open, almost like a tent. The panels are removed and the walls slide open. Most of the floor area is within 7 meters of an open wall. The building's roof and walls have translucent polycarbonate panels interspersed with solid panels that produce dappled natural light within. A lot of heat is generated when preparing 10,000 meals a day and so the roof has been sloped from south to north to promote passive ventilation, and stale air can escape through perforations in the top of the wall which is sheltered by the porch.

The shape of the roof was also designed to capture rainwater by creating a "butterfly" gutter with multiple drains and downspouts. The building has no toilets and therefore all drainage water is gray water, which is collected in tanks. The building's water consumption is typical of a commercial kitchen producing 10,000 meals a day. 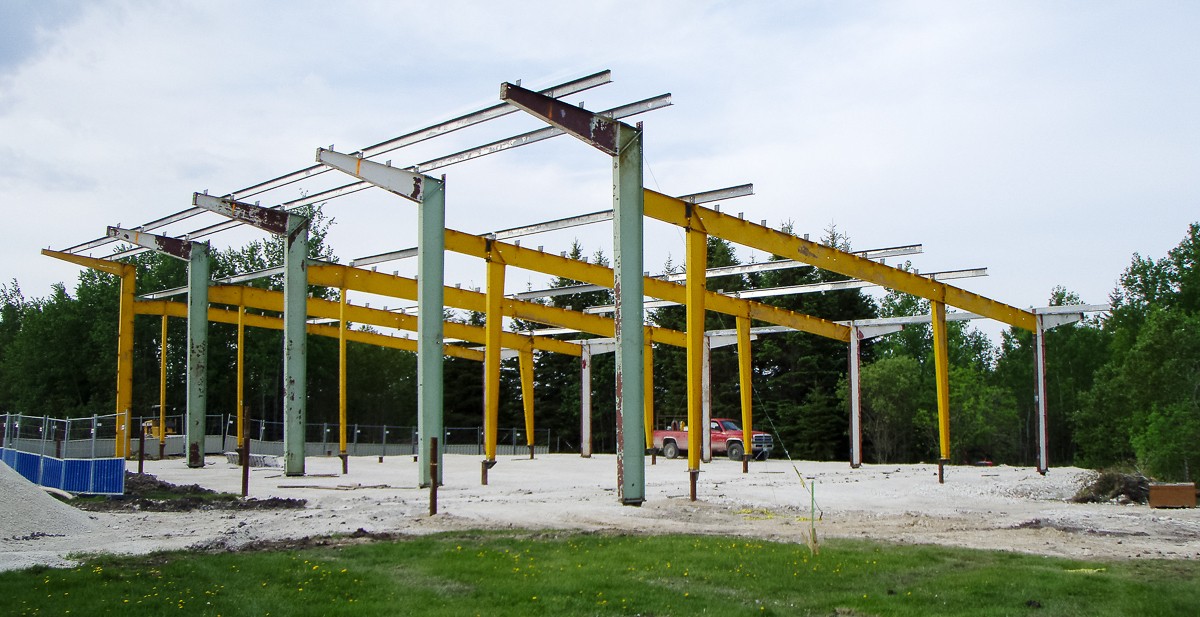 A total of 15 steel framing parts salvaged from three different pre-engineered rigid frame buildings were adapted for reuse at La Cuisine. The structure has been designed in such a way that very few modifications of the steel elements are necessary. Components have been modified and re-welded or bolted together. In addition to an entirely reused steel superstructure, all secondary structural parts, including roof purlins and struts, and metal roofing, are reused materials.

Left unpainted and exposed, the design team wanted the repurposed nature of the steel to be expressed for the occupants and visitors to the site. 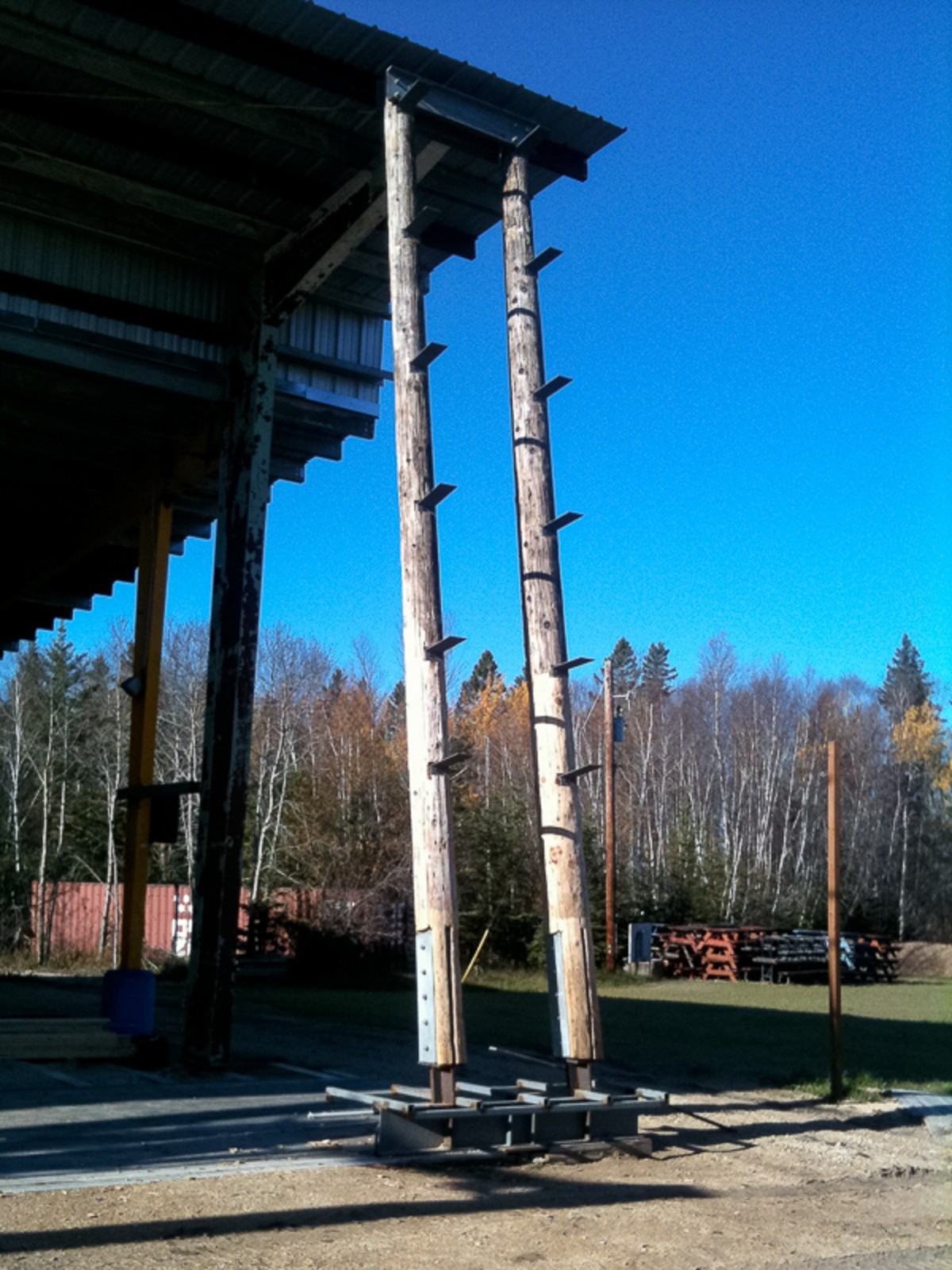 The disused cedar poles of Manitoba Hydro (provincial electric utility) were originally intended for landfill. The posts were inspected for suitability and left to age with their original finish. 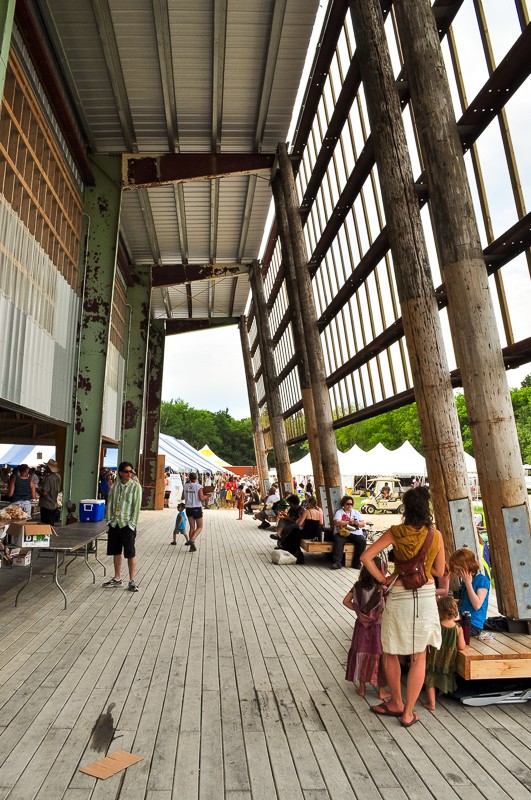 Manitoba's local bur oak is a common species of the region's riparian forest. The cold climate and frequent flooding are excellent conditions for a slow-growing, rot-resistant species.

The erosion of the banks, causing instabilities, leads to the deposit of mature trees in the waterways. Naturally felled trees are harvested and transported to landfill. Appropriate trees were selected, ground at an adjacent site and conditioned for use prior to installation.

The festival site is part of Birdshill Provincial Park in Manitoba. The park covers 35.1 square kilometers and features a wide variety of grassland ecosystems such as dry grassland, wet grassland, bog, aspen/oak, and mixed boreal forest, all within of its limits. For its relatively small size, the park is home to over 200 species of birds, 40 species of mammals, and a large number of white-tailed deer. All of this is mixed in with overnight campsites, the festival grounds, and an indoor beach, among other amenities.

The La Cuisine building is a small part of a large-scale redevelopment, which includes an emergency access road, new performance stages, and new water and water infrastructure. The entire project was subject to an environmental assessment which identified, among other things, habitat areas for the Loggerhead Shrike, an endangered bird species. The construction schedule of the affected areas was governed by the mating habits of this animal.

During the festival, the entire site resembles a utopian, shoe-optional pedestrian community teeming with people. As one of the festival's few permanent structures, the Conservatory is the backstage social hub.

In response to its backstage location, the La Cuisine building is preceded by a festival-sized veranda that serves as a welcoming space for visitors and arriving artists, shelter from summer storms and general backstage meeting space. At night, it becomes a lantern that backstage volunteers use to navigate in the dark.

When the buses arrive from the city, the artists and volunteers are disgorged at the veranda. When the gates to the festival open each morning, the day begins with a ceremony for festival-goers to claim a prime spot in front of the main stage. The claims are punctuated by a colorful landscape of polytarps of floor mats and garden chairs that give the settlers rights to the property until the end of the concert on the main stage that evening that day. The tarps are removed each evening, resulting in a newly composed patchwork the next day. The veranda cladding, while providing protection from the elements and permanent color for the La Cuisine building, pays homage to this vibrant tradition.

Water is pumped from an underground well on site. The water is potable without any need for filtration and is used in the kitchen for all cooking and cleaning needs. Wastewater is stored in tanks and removed from the park for proper treatment.

Steel superstructure - Salvaged from a pre-engineered rigid frame building in an industrial park northeast of Winnipeg.

Timber Poles - Decommissioned and diverted utility poles from a landfill from the Manitoba Hydro storage lot in Winnipeg.

Corrugated Iron Roof and Facade - The repurposed facade and roof were salvaged from various sites around Winnipeg. The new material, if any, is the second factory or the end of a production line.

The structure was found by project manager Gerry Humphreys, and the design of La Cuisine was adapted to suit the structure found. Three separate steel-framed buildings were amalgamated to form the main structure of La Cuisine. One set of steel frames was reconfigured, while the other two were literally flipped, the beams became columns and the columns became beams. Very few modifications to the structural elements were required and were carried out on site with a minimum of tools. The original paint finish has been retained to help communicate the story of their previous life. 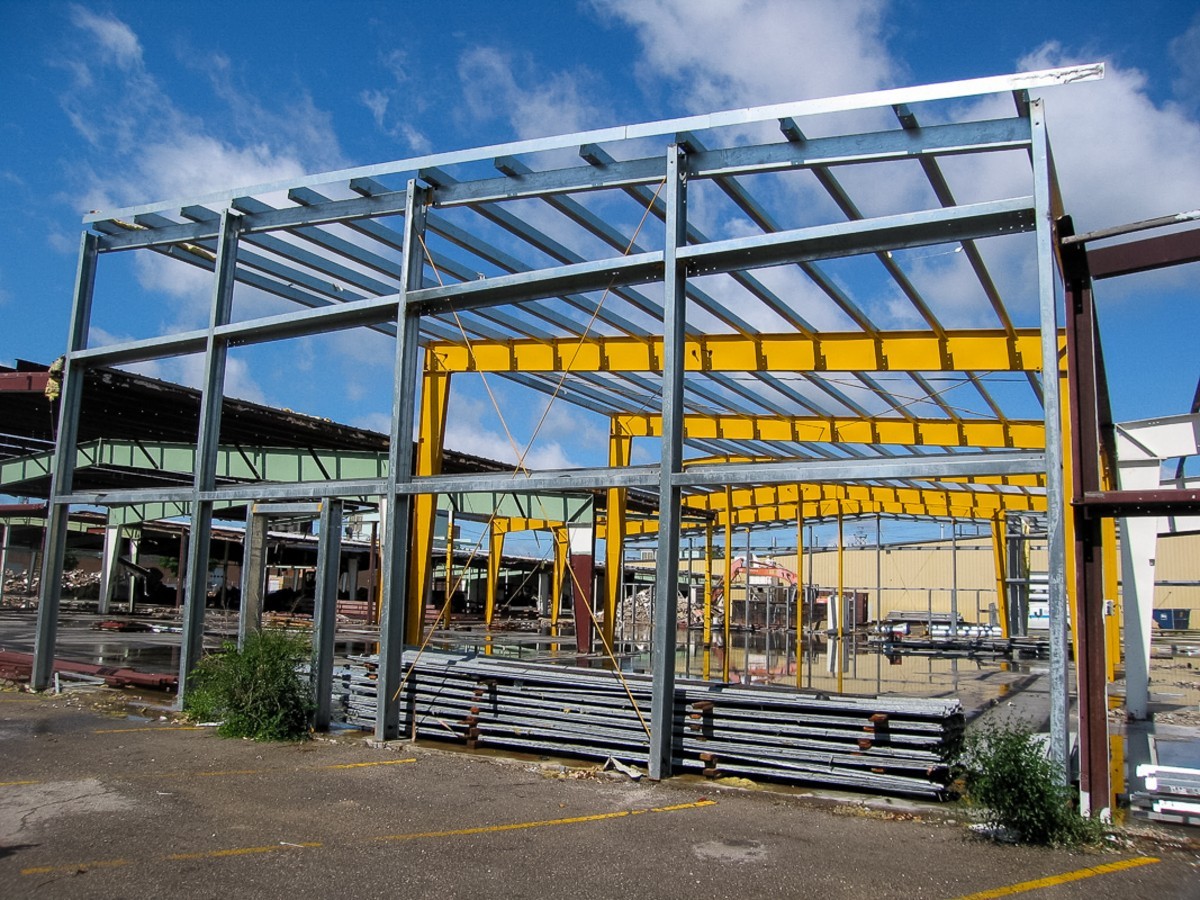 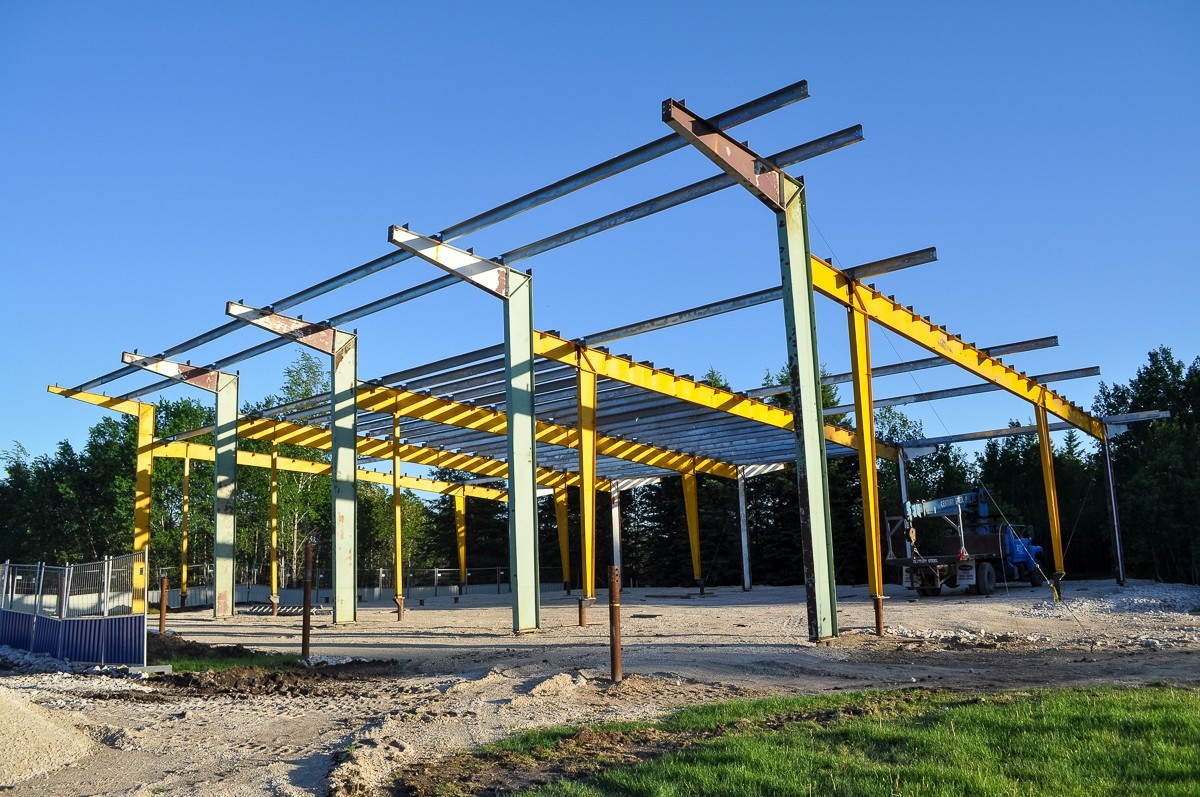 The disused cedar utility poles originally destined for the landfill were assessed for their structural integrity and fitted to the veranda superstructure. The posts were left in their unfinished state and continue to weather naturally with age. 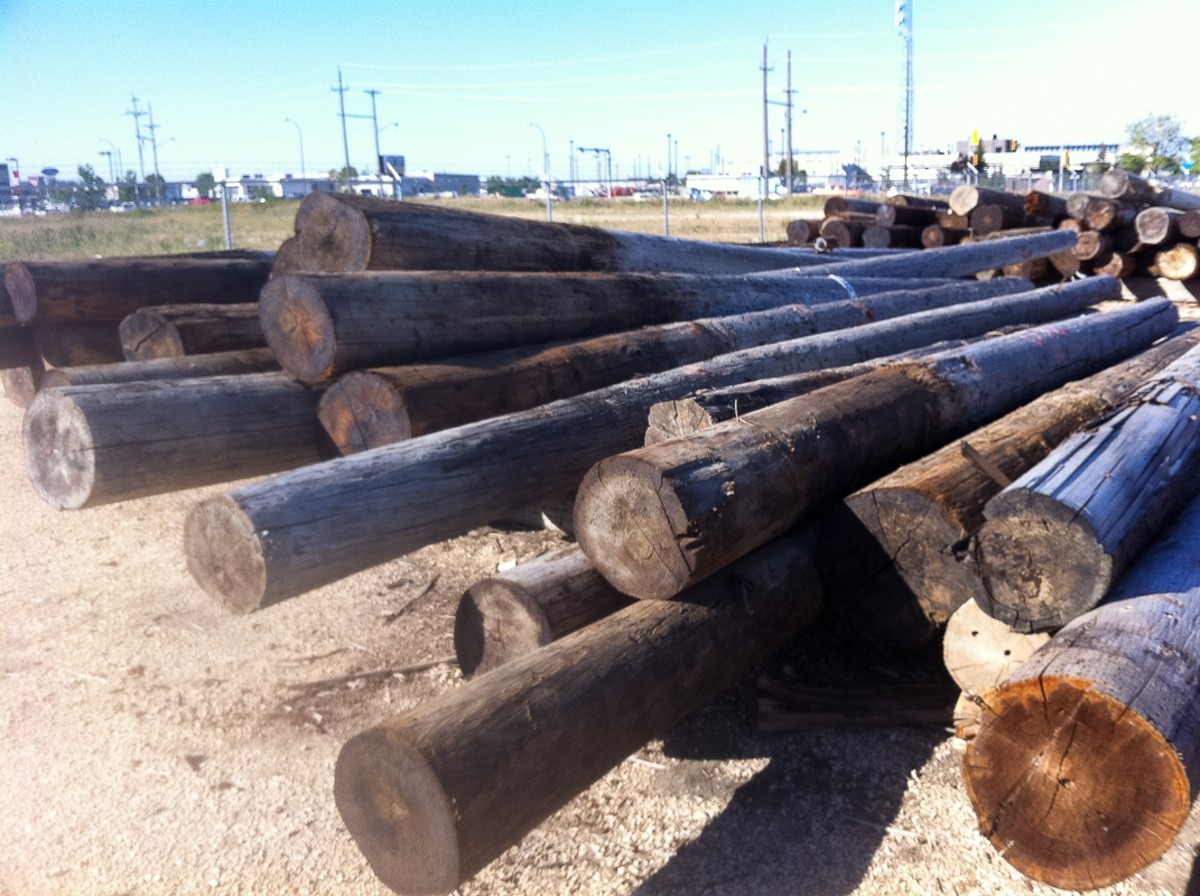 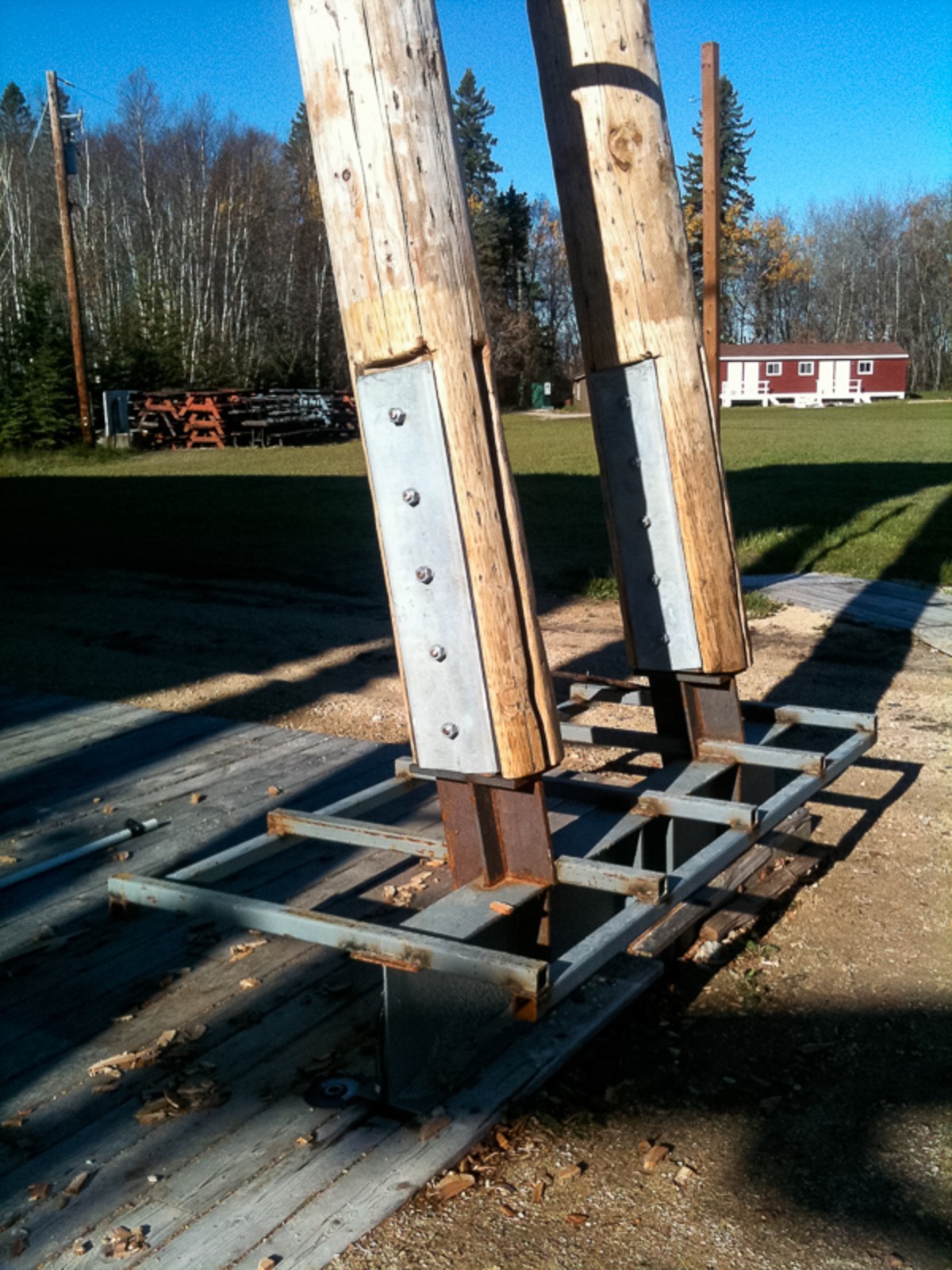 City of Winnipeg canopy oaks that have been removed for a variety of reasons (riparian destabilization, aging urban development) have been inspected at the landfill to ensure they are suitable. A mobile sawmill was installed on an adjacent site and the selected trees were shredded and conditioned before being moved to the project site. 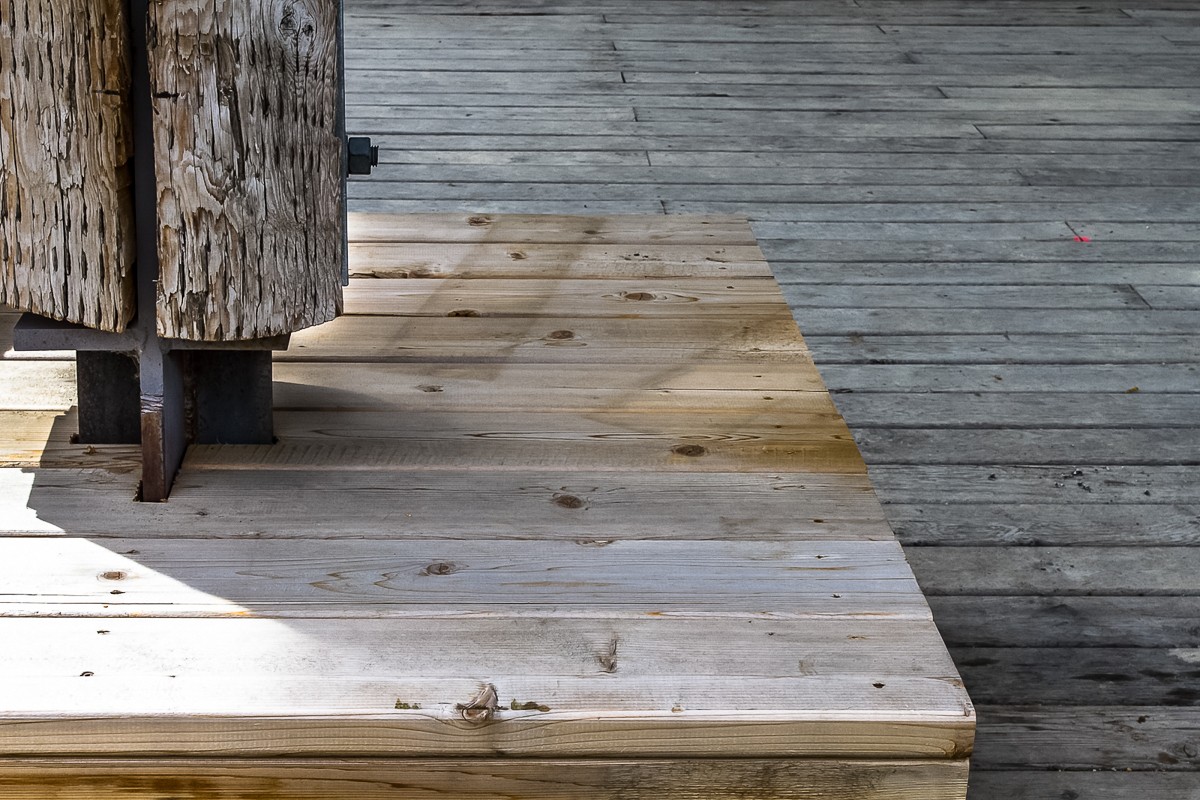 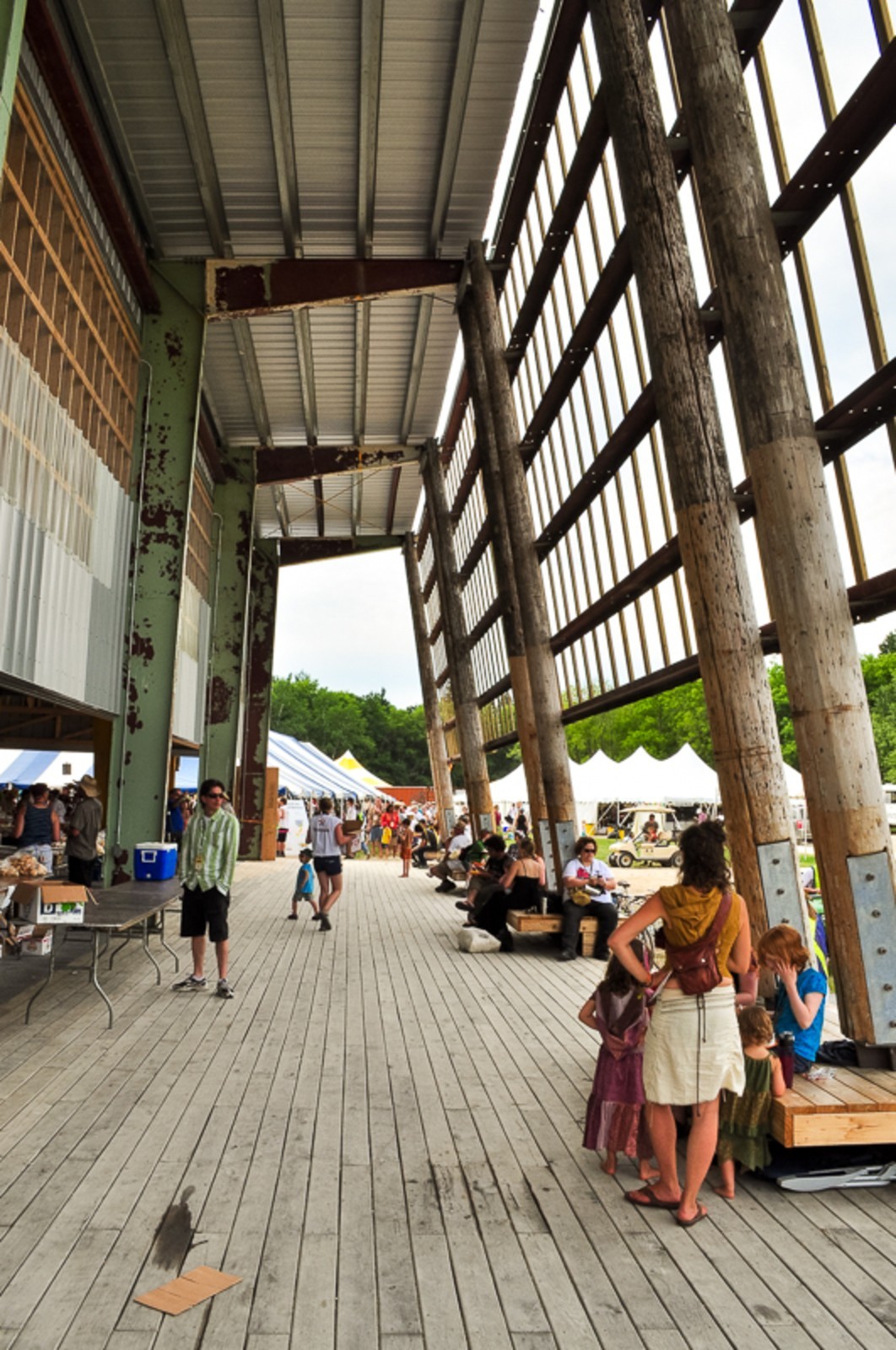 Due to the difficulty of recovering thin sheet metal panels, 50% of the facade is made of new panels. The new panels are made with a high percentage of recycled materials and have been selected at the end of the production lines, from what would otherwise be sent for recycling.

While not technically a repurposed material, the hardwood flooring used for the veranda is "diverted from landfill" Manitoba bur oak. A portable shredder was installed at a Winnipeg landfill, viable oak trees brought to the landfill were shredded and dried there, then transported to the festival site for use as porch flooring. Untreated, local oak is an extremely robust wood species, easy to work with and naturally rot-proof.

Reversibility
The unique annual cycle of a 5-day festival, with a brief set-up and tear-down period, followed by 11 months of dormancy, required a versatile construction that served as both kitchen, tent drying and set-up of storage. The building itself is mostly screwed and wedged, including the foundation which is made up of giant ground screws driven into the ground. No concrete has been poured, and should the festival ever move to another site, this building could be dismantled and removed, leaving the grounds to return to their natural state without a trace.

Adaptability
Now in its 41st year, the festival's beginnings were humble and its facilities improvised. The use of upcycled construction components in the buildings allowed for an informal aesthetic befitting the festival, where the original components are used 'as is'. In addition to a fully reused steel superstructure, all secondary structural members including roof purlins, wall beams and metal roofing are reused materials. 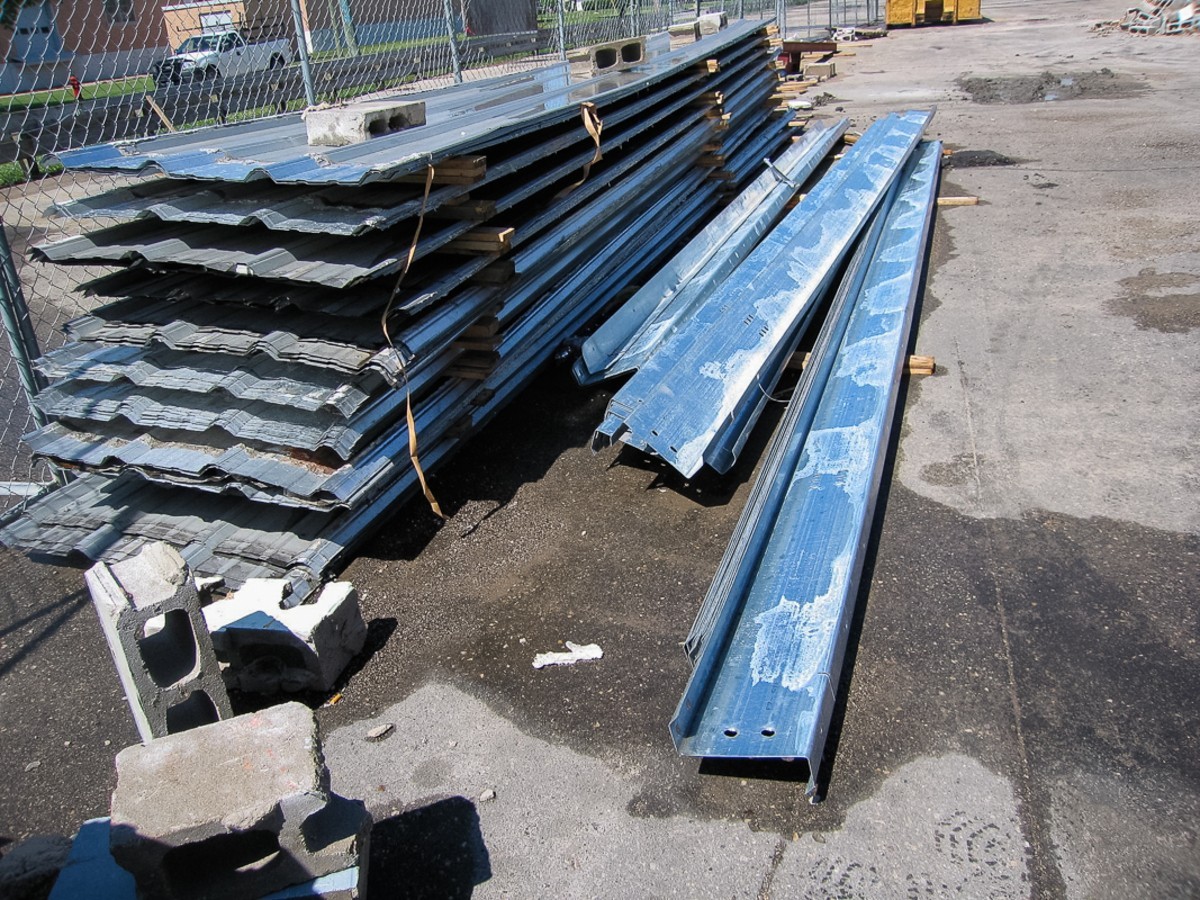 Modular interlocking event flooring made from 100% recycled materials was laid directly on the floor inside the building. A modular system was chosen so that damaged tiles can be easily replaced, and the space can be adapted to the festival's seasonal programme. 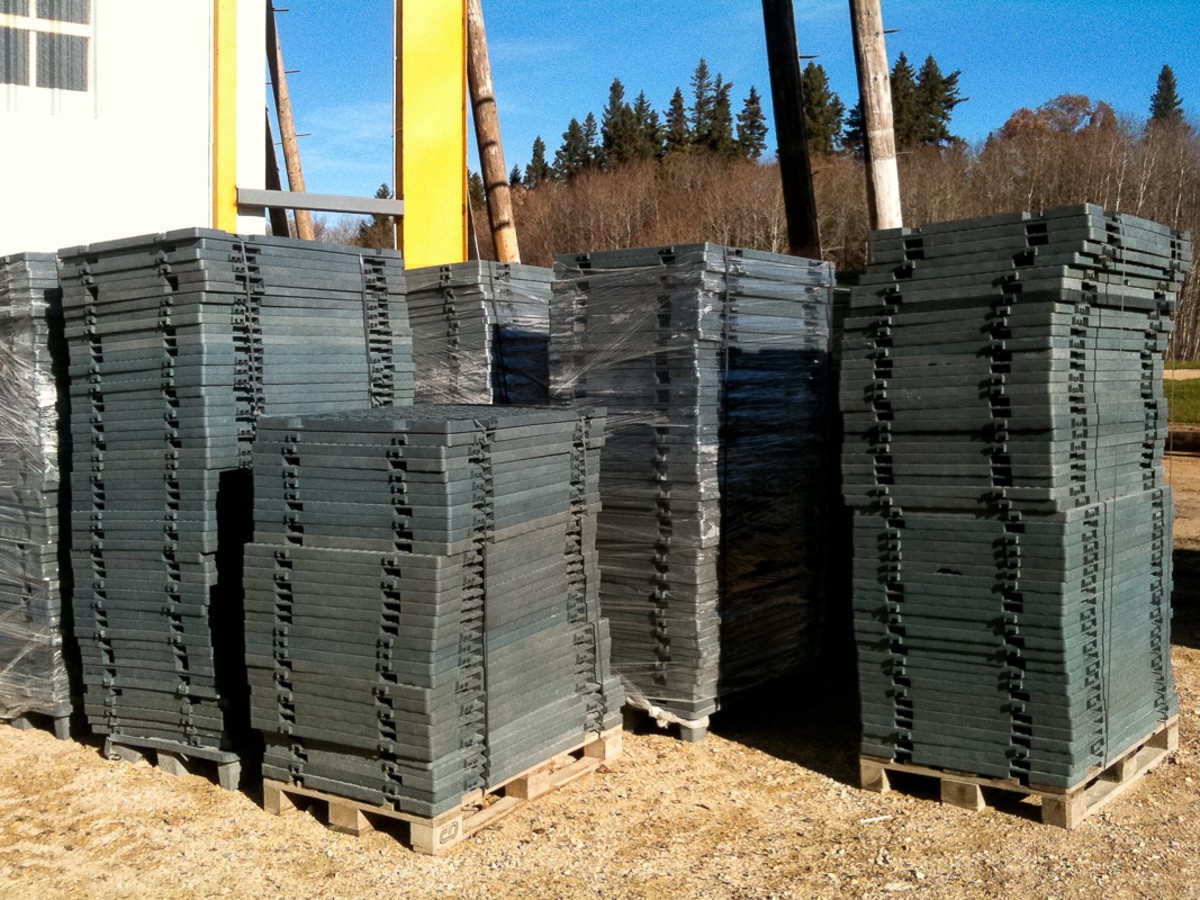 The 37 screw piles used for the foundation are made of 100% recyclable steel. Although new materials, screw piles were chosen because they can be pulled out of the ground and reused on other projects simply by unscrewing them from the ground and transporting them to the new location. 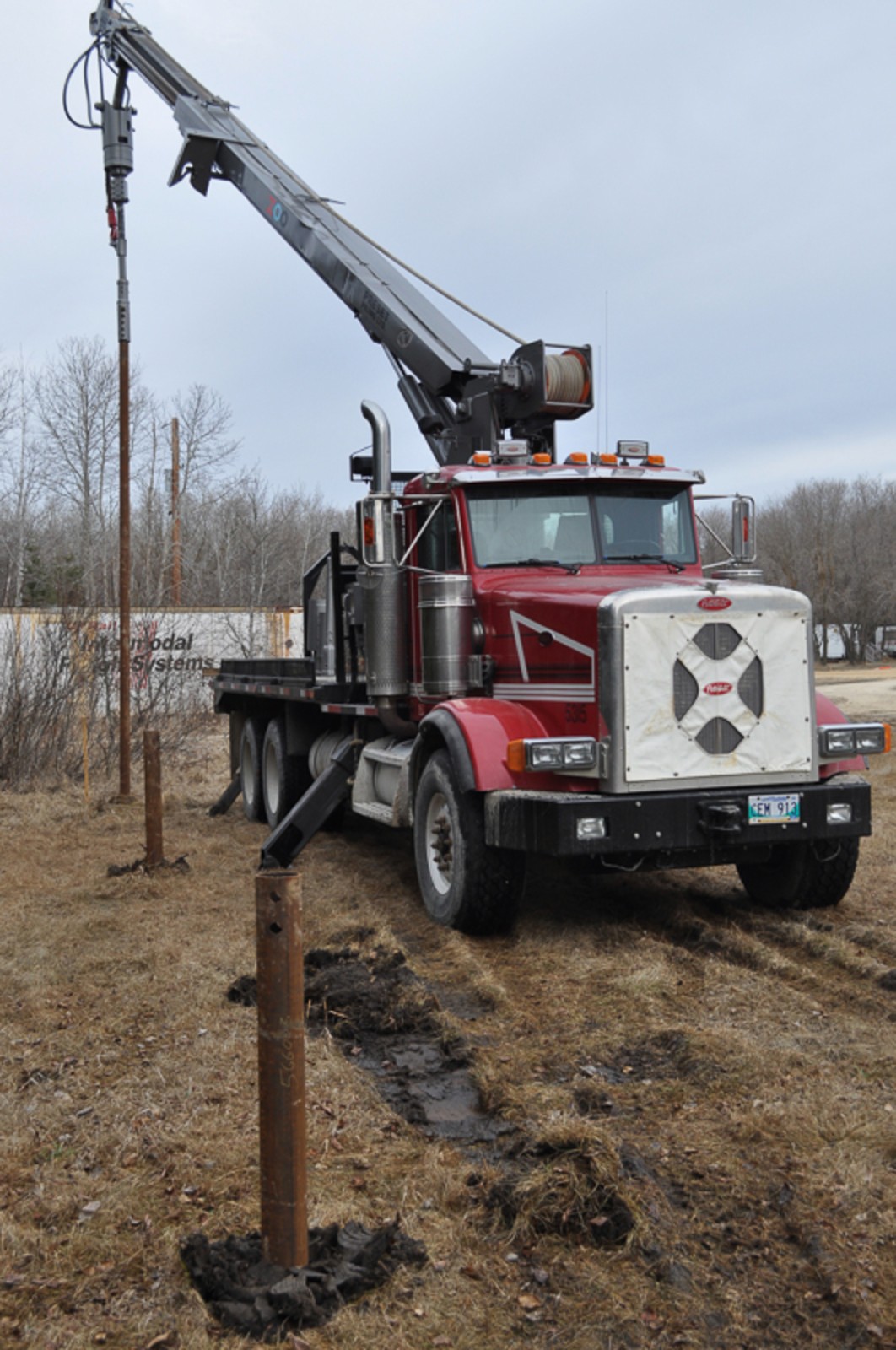 Gravel for the substructure was excavated within 1 km of the site and placed so that it could be salvaged should the project need to be moved. 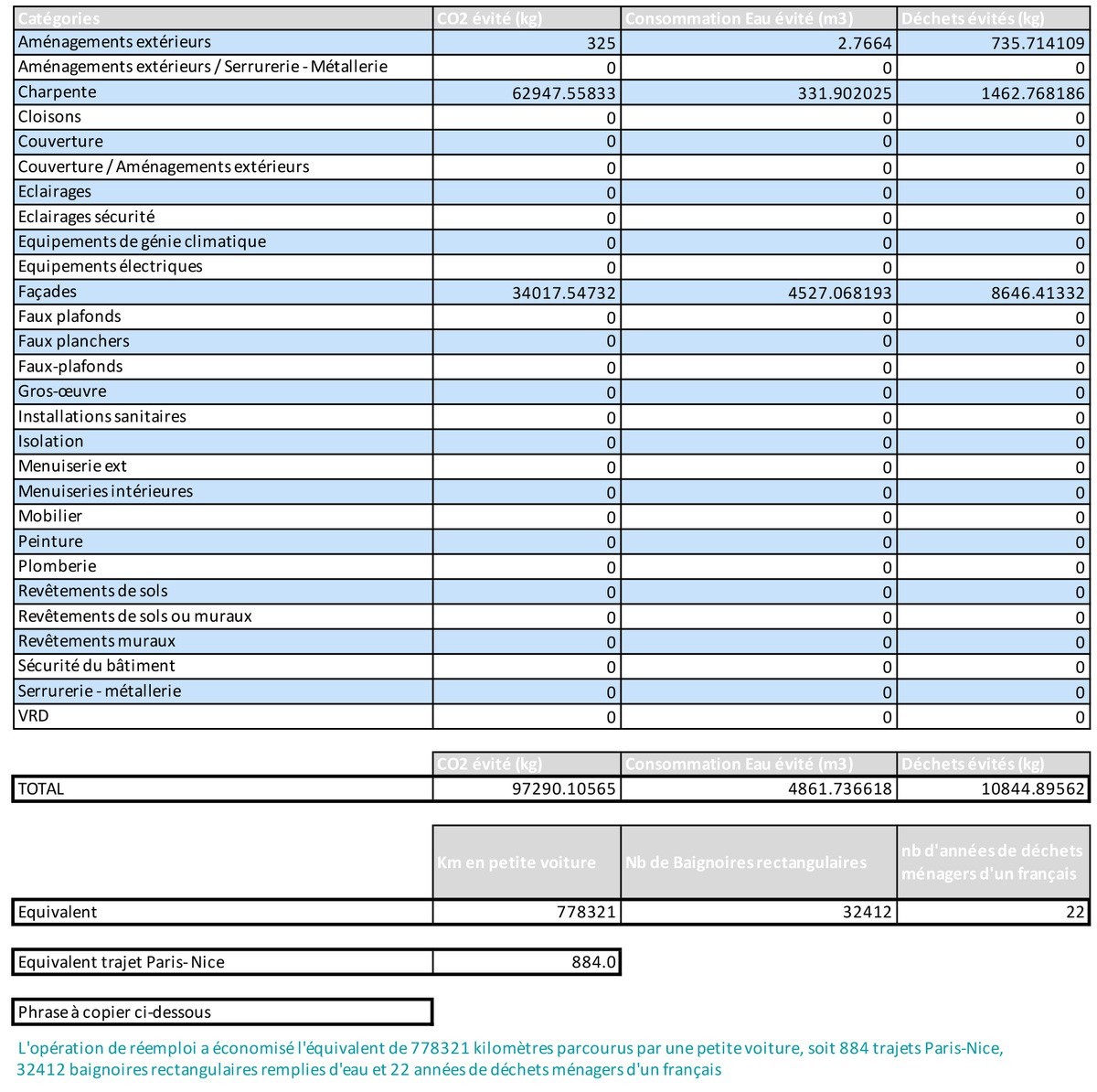 Working in the spirit of the Winnipeg Folk Festival's environmental policy, La Cuisine was designed to reuse components of an existing modular steel structure. The project team were able to source an existing modular steel structure building that was to be demolished and design a new Festival kitchen using most of the components from the original buildings. The existing building was carefully dismantled, transported from Winnipeg to the festival site and rebuilt in a new form.

Although the project is located in Canada, it has been published on the Opalis European website as the project demonstrates careful reuse of materials with sensitivity to the existing program and environmental and cultural conditions. The Opalis website aims to facilitate the use of reused materials in construction and renovation projects, it is supplied as part of the FCRBE project, carried out as part of the Interreg NWE program.

The site allowed the storage of all materials directly from the beginning. Thus, the transport distances were as short as possible and the materials only had to move once. 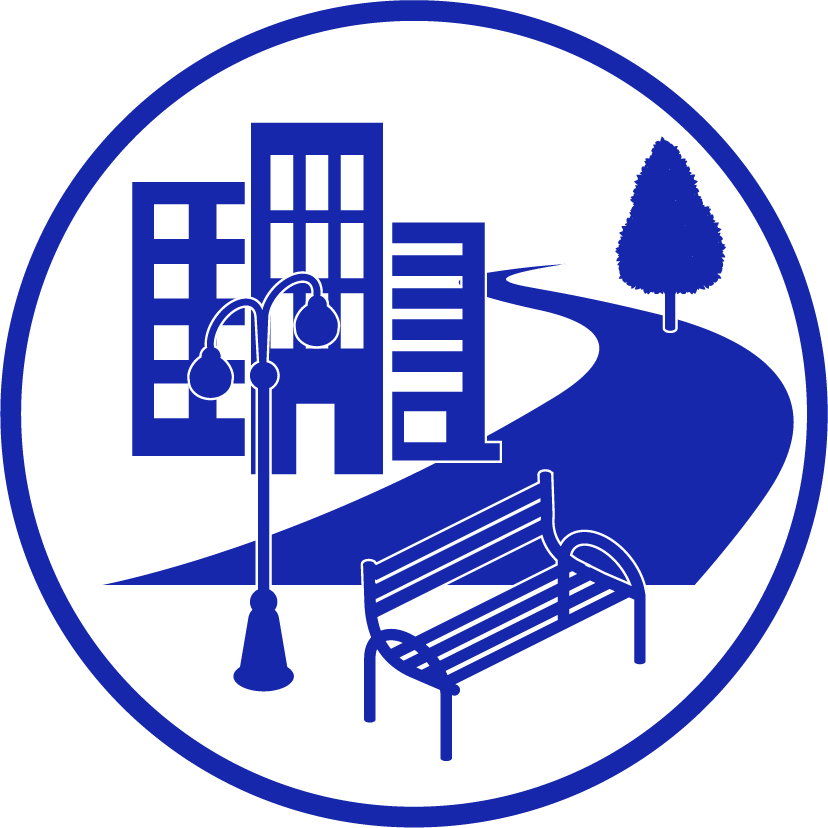