Located in the Cité universitaire de Paris, the Maison de l'Ile de France is the first eco-campus in the capital. The project is exemplary and implements a high energy performance strategy to meet ZEN objectives (Zero Energy, Zero Carbon, Zero Nuclear Waste) and thus anticipate the thermal regulations of 2020.
With its 142 rooms and triangular shape, the residence opens to form a wide wall that captures solar energy. The facade overlooking the peripheral boulevard is made up of 563 m² of photovoltaic sensors and 260 m² vacuum thermal panels combined with an inter-seasonal storage system of 156 m3. This device constitutes the signature of the house.
The storage tank will ensure 80% of the thermal requirements, so in winter, heating and domestic hot water can use the surplus energy stored in summer.
This lets you guess the innovative energy feature of this house that produces more energy than it consumes.

The Ile-de-France Region finances the operation and is the project owner, with the SAERP as its agent. Upon completion of the construction, it handed over the building to the State and the Cité Internationale Universitaire de Paris, which became its manager. The ambition of achieving the Positive Energy level was desired from the outset for this project, which already anticipated strongly on the evolution of thermal regulation. Achieving this objective beyond regulatory uses was envisaged at the beginning of the programming studies, as well as the choice not to aim at certification and labeling, but rather to build customized environmental objectives, depending on the use and of the site. The Region's expectations for this project are twofold: - On the one hand, this building could be emblematic of the environmental policy carried out by the Region. The aim of the project is to be a demonstration of the Region's environmental policy and to become a place of exchange on this subject - On the other hand, it is also one of the illustrations of its policy in terms of hosting foreign students in the Île-de-France region. Beyond the energy objectives, it is a global project, which has expanded to other issues. To only cite a few : - Limiting gray energy: as an example, storage tanks and solar panels are manufactured in the south-west. - Ensure good indoor air quality in view of the proximity of the peripheral, by providing sufficient air filtration devices and ventilation rates, and by limiting the use of polluting materials (paints, Floor, furniture ...) - Protecting residents from acoustic nuisance related to this proximity - Promote the use of renewable materials, the project thus uses a high proportion of wood (solid wood flooring or rubber floors, wooden framing of light facades ...) - Limiting water consumption, using hydro-efficient appliances and re-use of rainwater for watering - Implement a site with very low nuisance, considering the sensitivity of the site (park very frequented, close to the Houses of Lebanon and Cambodia) - Promoting integration jobs: this project made it possible to carry out more than 7,000 hours of insertion on the site Measures have been put in place to help residents understand the operation of the building and make them aware of the environmental issue. - Like all the residences of the Cité Internationale Universitaire in Paris, the Maison de l'Ile-de-France has a director. In order to play a real role of animation and sensitization of the residents, the choice Was an environmental specialist. - Regular awareness-raising actions will be undertaken by residents on the sustainable development and the specificity of the building; The RDC conference room is intended to host events of this type. - A building logbook will be produced to the residents to explain the operation of the building and the proper use of the equipment - At the completion of the work, a satisfaction survey on the comfort of residents and staff will be carried out and analyzed by our AMO High Environmental Quality (first and second year). Energy consumption will also be analyzed for three years. The pioneering character of the construction project of the Maison de l'Ile de France in the environmental field, but also its very particular situation on the immediate outskirts of the peripheral boulevard and the Cité Internationale Universitaire park led the Île de France region to To appeal to IRCAM, the Ecole des Beaux-Arts in Le Mans and the Ecole Nationale Supérieure de Création to work on the sound identity of the building. The questions raised included: -how will the sound performance of the building materialize? -how to make the complex functioning of energy systems more readable? - how to encourage a greater sobriety of consumption (energy, water ...)? The collective MENURE, from the Master Design Sonore created by these three schools, has designed a device in close connection with the building. The installation comprises a perforated structure suspended from the ceiling of the reception hall and composed of more than 200 sensors connected to the GTB. The sound produced varies according to the consumption of the residents.

Usually, the architect gives the engineer an already designed building and asks him to "make it work". Here, the ANMA agency (Nicolas Michelin) asked DEERNS about "How to achieve the BEPOS objective and how should the building be designed? ". After an energy analysis of the site, DEERNS opted for a 100% solar strategy, which was based on solar thermal inter-seasonal heat storage tanks, to meet the heating and domestic hot water needs of the building. On the basis of this assumption, ANMA has placed these tanks at the heart of the architectural design for the success of the energy strategy. 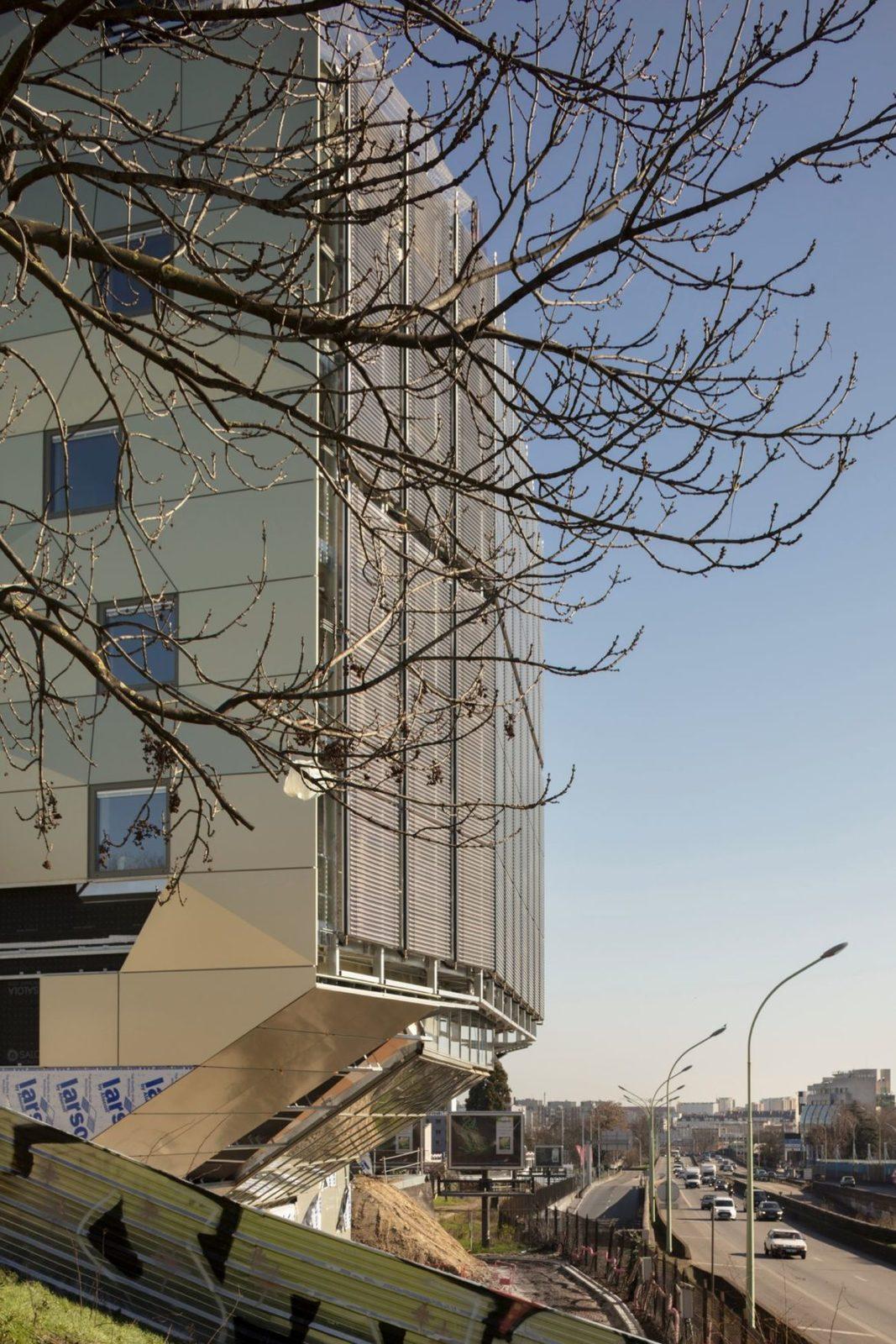 The building being delivered at the end of May 2016, we have not yet been able to obtain information on the actual consumption. Nevertheless, detailed dynamic energy simulations have been carried out in order to better estimate the real behavior of the building and its users. The energy strategy is based mainly on the inter-seasonal storage of water tanks (approximately 170,000 liters), the energy regime should take 1 year before functioning as planned during the design. Dynamic energy simulations have been carried out to the detriment of simple regulatory calculations, so as to estimate the consumption and performance of the building in real way. Preliminary studies have been carried out in collaboration with the CIUP to better identify the residence and occupancy scenarios of the residence, according to the behaviors and consumption observed on other residences of the CIUP.

Ventilation: natural ventilation is possible from the occupants when opening the tilting windows. Moreover, during the maintenance, a French opening is possible by the technicians.

The energy strategy is 100% renewable, especially 100% solar. Indeed, two giant water tanks, of approximately 70,000 liters each ensure the storage of the water heated by the solar panels. On the south facades, solar thermal panels will produce in summer the energy needed for heating and domestic hot water for the rest of the year. This allows the installation of an inter-seasonal heat storage system. The stratification of heat in these tanks is one of the key elements of the building's energy performance. This explains the vertical position of the tanks.

Survey will be carried out during the year 2017

The house of the Ile de France is located in the Cité International Universitaire de Paris (CIUP) near the ring road. It has direct access to RER B, Tram 3, Vélib to Parc de Montsouris. 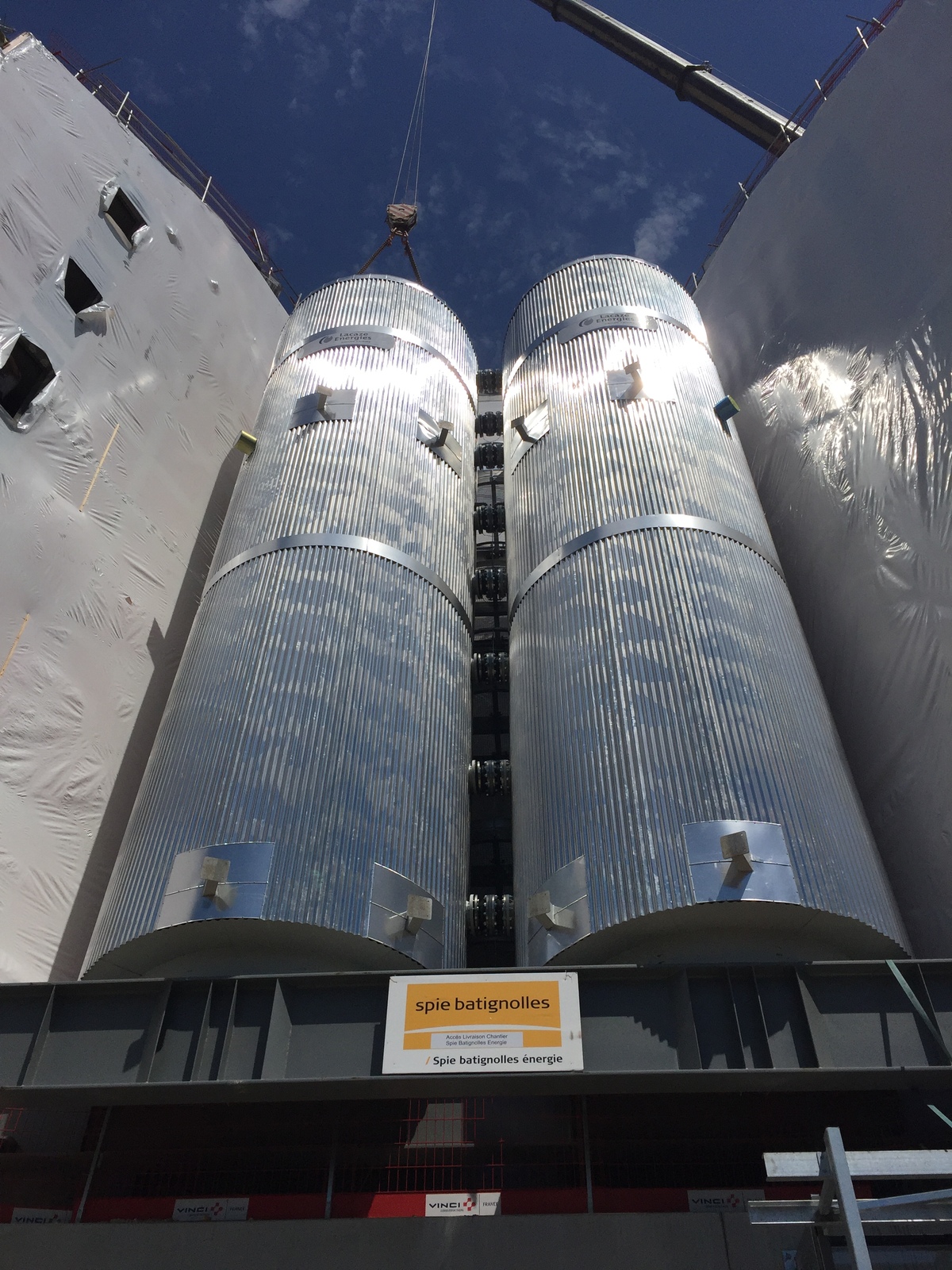 After an energy analysis of the site, DEERNS opted for a 100% solar strategy, which was based on solar thermal inter-seasonal heat storage tanks, to meet the heating and domestic hot water needs of the building.

DEERNS has designed a tank of 160 m3 of water, placed in the heart of the building and heated thanks to thermal solar collectors. The tank allows the building to be supplied with hot water both for heating (low temperature radiators) and for domestic hot water (DHW). The complement to this device is made by a supplement on district heating network (CPCU).

The over-insulated tanks will restore heat as needed. The stratification of heat in these tanks is one of the key elements of the building's energy performance. This explains the vertical position of the tanks. Indeed, this approach will maximize the efficiency of solar thermal panels and take the heat at the level of the appropriate stratum, according to the needs and the desired temperature.

The installation of tanks on this scale (for a building of 5000m² and a volume of 160m3) represents a real technological innovation in France and even in Europe. 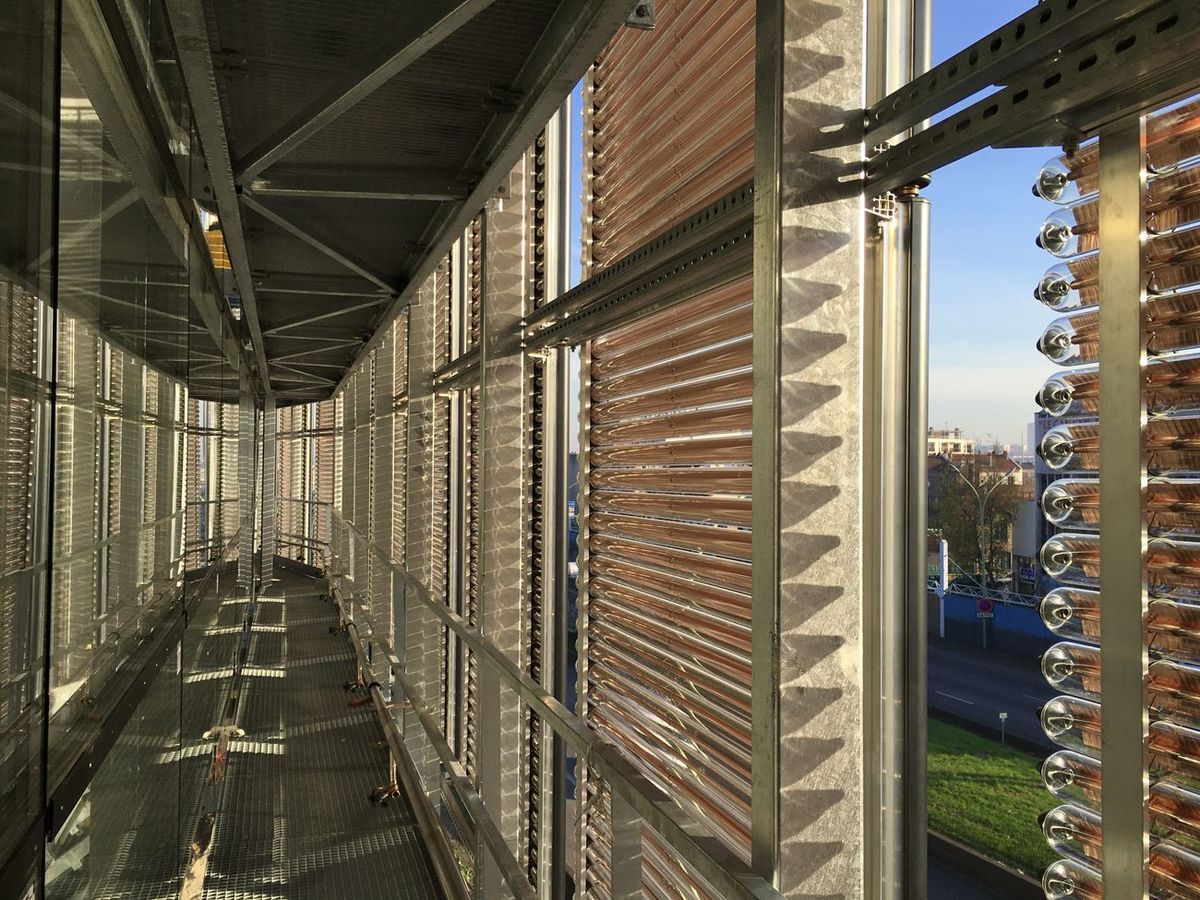 The house will benefit from a genuine solar power plant (260 m² of solar panels under vacuum) which will ensure 100% of its thermal needs. Solar tubes heat a total volume of 160 m3 of water distributed in two prefabricated tanks of 15m high. This inter-seasonal energy storage supplies domestic hot water and heating circuits. 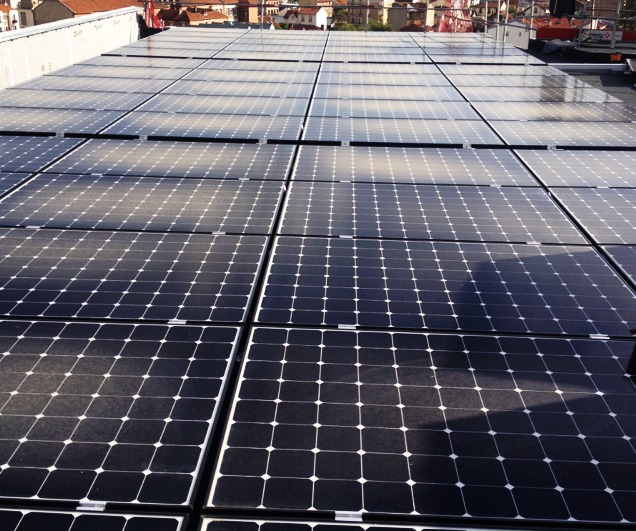 The electricity production of the building is provided by the photovoltaic plant of 114 kW (700 m² of photovoltaic panels) located on the roof and on the inclined plane of the south facade. Given the limited roof area, the best technology was chosen with panels with a yield greater than 20%. 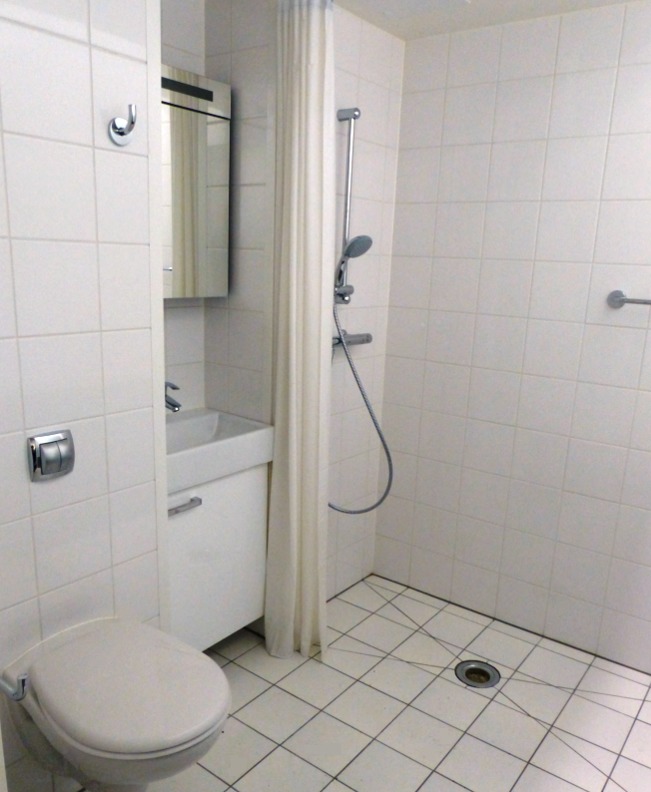 The breathable glass (double glazing + single glazing), with an integrated blind will ensure the thermal and acoustic comfort of the occupants. Indeed, this glazing is designed to prevent any arrival of condensation on the windows. The filters prevent the intrusion of foreign bodies and promote the hygiene of the installations and thus the rooms of the residence do not require any maintenance. Furthermore, the implementation of a badge reader system allows the temperature, lighting, ventilation and blinds of the rooms to be managed at all times in order to promote the comfort and health of the occupants while controlling the consumption of resources. This management system, identifying busy / unoccupied modes (similar to hotels), will guarantee a significant energy saving.

In the Maison Île de France, the biggest item of energy consumption is that of domestic hot water. It was therefore necessary to select showers at low flow, but also to look at the possibility of valorising the heat of gray water. A system for recovering heat from showers has thus been implemented. Since the water flow is limited to 6L / min, the recuperator makes it possible to recover 40% of the heat resulting from the gray water, thus reducing the residence's energy consumption.
Indeed, the hot waste water from the shower goes down inside the wall of the heat exchanger, preheating the evacuation tube. The clean water rises spirally around this evacuation tube. Hot water transfers calories to cold water. Once preheated, the water will be returned to the shower on the one hand and to the DHW cylinder on the other, replacing the cold water.

In addition, the shower rooms are factory prefabricated. This approach has the advantage of limiting worksite defects, simplifying the intervention of the different state bodies, and reducing the amount of waste that could have been produced.

The residence located on the edge of the Paris ring road and close to the A6 motorway is characterized by a very dense urban and road fabric. Its sound environment is therefore very busy. However, the facades and the windows make it possible to isolate the residence strongly from external noise, thus contributing to the acoustic and thermal comfort of the rooms. The fact that the thermal installations are placed on the south façade (the peripheral side) has led to placing the rooms in the east and west facades, thus limiting its exposure to noise pollution.

The facades are made up of light elements joining the concrete slab noses. Wood (renewable material) is used for the primary structure. Insulation and rain cover are provided by compressed wood fiber panels that upgrade the by-products of sawmills. A cellulose wadding obtained from paper recycling was placed between the plaster facings. The bathrooms of the rooms are pre-fabricated to speed up the time required for the construction site, but also, and above all, to limit construction waste and facilitate the maintenance and maintenance of the said bathrooms in the operating phase. 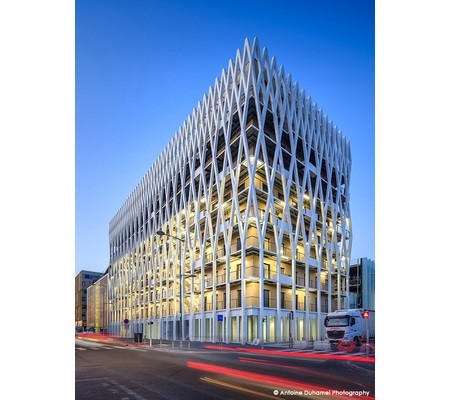 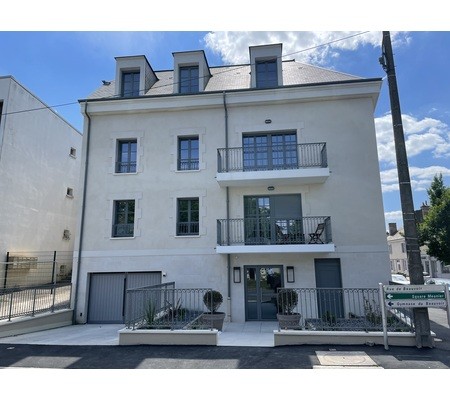 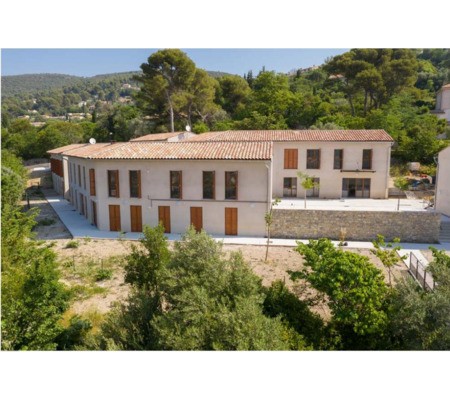 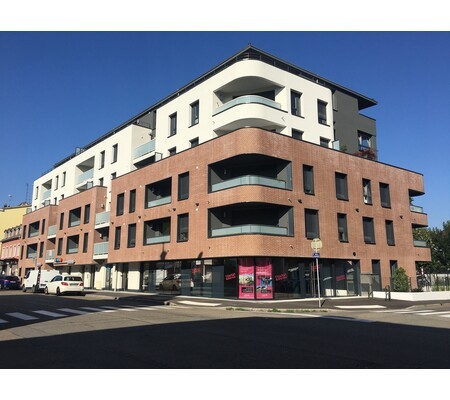 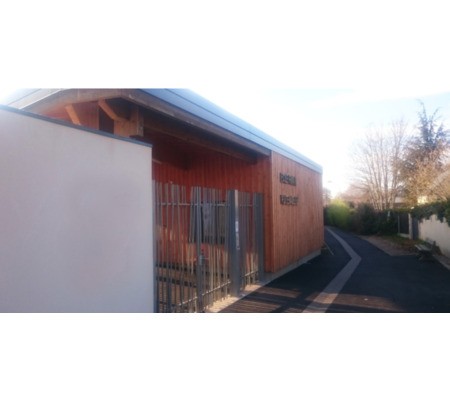