"Nestled in greenery, conducive to peace,
He greets us with friendly smiles,
Under the benevolent eye of brother the birds,
Inviting us to believe in the life we desire."

Jacques - inhabitant of the hamlet

This project involves the construction of 39 collective housing units in the town of Draguignan. Among these housing units, which are divided into 4 buildings, 22 have the status of "family pension" (T1 and T2), intended for people with low resources and in a situation of exclusion, and 17 are social housing ( from T2 to T5).

The buildings have been designed according to the principles of ecological construction: efficient insulation and energy system, healthy and sustainable materials, etc. The garden is of the Mediterranean type (dry garden) in order to reduce the need for maintenance and watering.

A pilot project for solidarity and the fight against isolation

These constructions form the Hameau Saint-François, an eco-hamlet which is positioned as a place of housing and solidarity activity. It was created thanks to the donation of the Erymanthe property to the diocese of Var by its owner, who wanted to dedicate her second home to a solidarity initiative for vulnerable people.

This is a pilot project launched by the Union Diaconale du Var, in partnership with an associative network made up of Habitat et Humanisme, Fratelli-UDV and Secours Catholique . The City of Draguignan, the Community of Dracénoise Agglomeration, the Department of Var, the PACA Region, the Departmental Directorate of Territories and the Sea (DDTM), the Departmental Directorate of Social Cohesion (DDCS) also provide their social and financial. Individuals and companies have also supported the project through financial and material donations. The commitment of all these actors, associations, public and private, was crucial in the assembly and the result. Beyond these structures, there are individuals who have dedicated their time to carrying out the project. Habitat Humanisme, for example, is a solidarity property company, which relies on the commitment of many volunteers.

It is part of the problem of lack of housing - and in particular of social rental - in the Aire Dracénoise which has recorded significant growth in its population. This deficiency concerns more particularly priority populations: the homeless, poorly housed, housed in emergency housing structures or in unsanitary housing. However, the initiative is not just about meeting this material need. She carries a desire to design a united place, which puts the human at the heart of the space; as these two pillars illustrate:

The project was divided into 3 phases:

Promoting living together and eco-gestures through housing and development

Several common areas are present on the

site, places of community life and conviviality: a kitchen and a collective laundry, a common room with games and library, an associative space and a shared garden. The inhabitants alternate to manage the maintenance of these spaces. In addition, the hamlet is on a human scale, which allows for more personal ties. 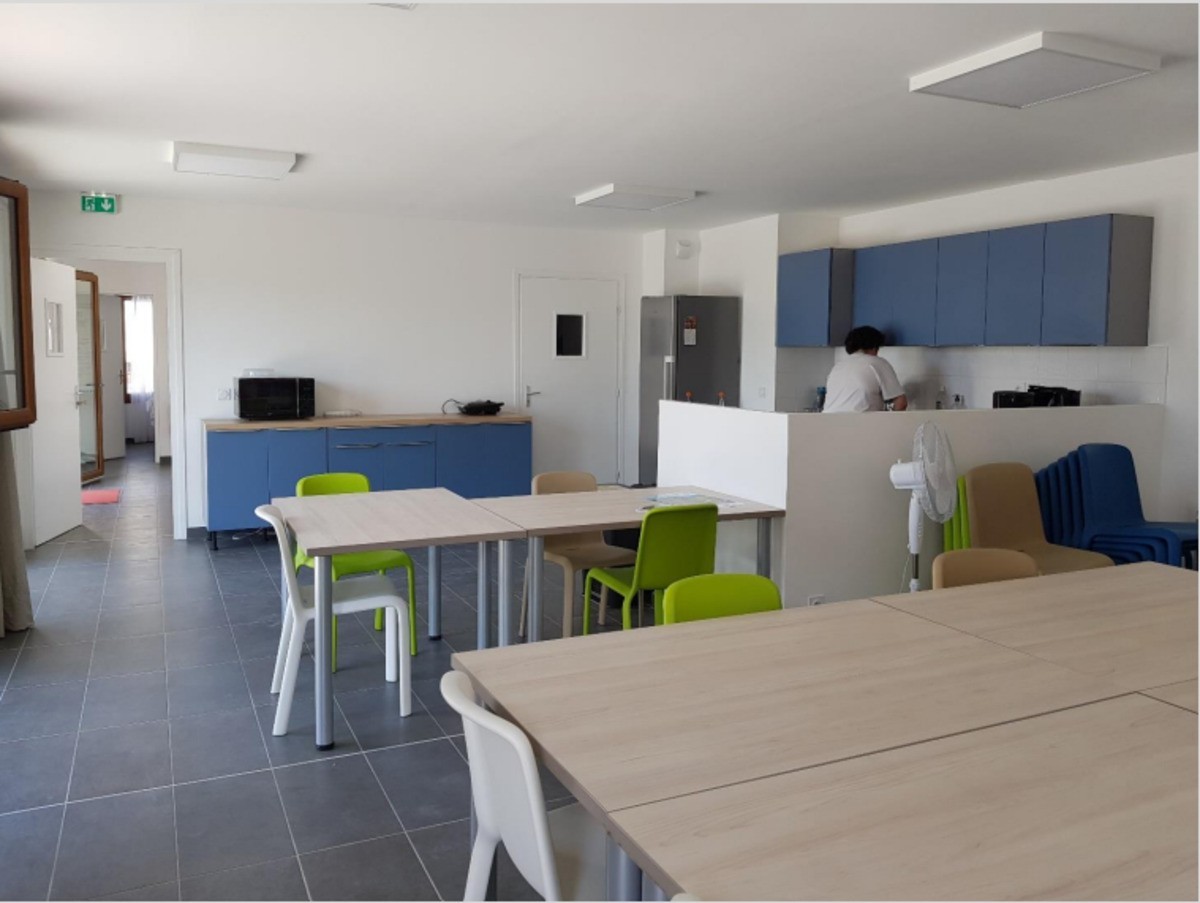 Many activities, particularly on the subject of eco-responsible practices, are offered . They offer residents other opportunities to discuss while learning about the issues of ecological transition. For example, the shared garden and the planters made from reused pallets were created during two workshops. The surplus production from the vegetable gardens is sold, the profits can thus be reinvested in other initiatives carried out by the inhabitants. Moments of celebration, aperitifs and open house events also punctuate the life of the hamlet. The site also frequently welcomes volunteers, scouts and disadvantaged visitors passing through.

"Residents' councils" make it possible to discuss and establish rules for living together , for example on the use of outdoor spaces, events, participation in services, etc. Thus, a shared governance has been established, which makes it possible to make everyone responsible for the proper maintenance of the site and to reintegrate people in situations of exclusion into community life.

Support for the public is carried out by volunteers, integration associations, paid educators, and by the inhabitants among themselves who thus recreate the solidarity initiated by the animation team. The participation of the three associations in the project has been a decisive element in the success of these initiatives. They have expertise and experience in the field on the inclusion of vulnerable people and the creation of places of solidarity. Consequently, dwellings and activities are better adapted to the needs of the populations than in the framework of projects carried out solely by institutional actors.

Beyond the solidarity aspect of the place, the project leaders wanted to promote energy sobriety through energy -efficient buildings designed according to the principles of bioclimatism. Economical systems have been chosen, such as efficient individual gas boilers for heating and domestic hot water. Particular attention has been paid to the insulation of the buildings and consequently the bioclimatic gains are between 28 and 38% for the four blocks. Finally, thermostatic faucets and LED lighting with presence detectors for common areas such as the kitchen make it possible to control the consumption of these spaces frequented by a large number of users. Individual and collective support around the use of housing makes it possible to raise awareness among occupants and guarantee good real performance. Thanks to these initiatives, residents benefit from relatively low rental charges .

In order to take advantage of the significant sunshine in the region, the buildings benefit from generous openings. Wooden solar protection protects them and thus limits losses, while ensuring good summer comfort for the inhabitants. 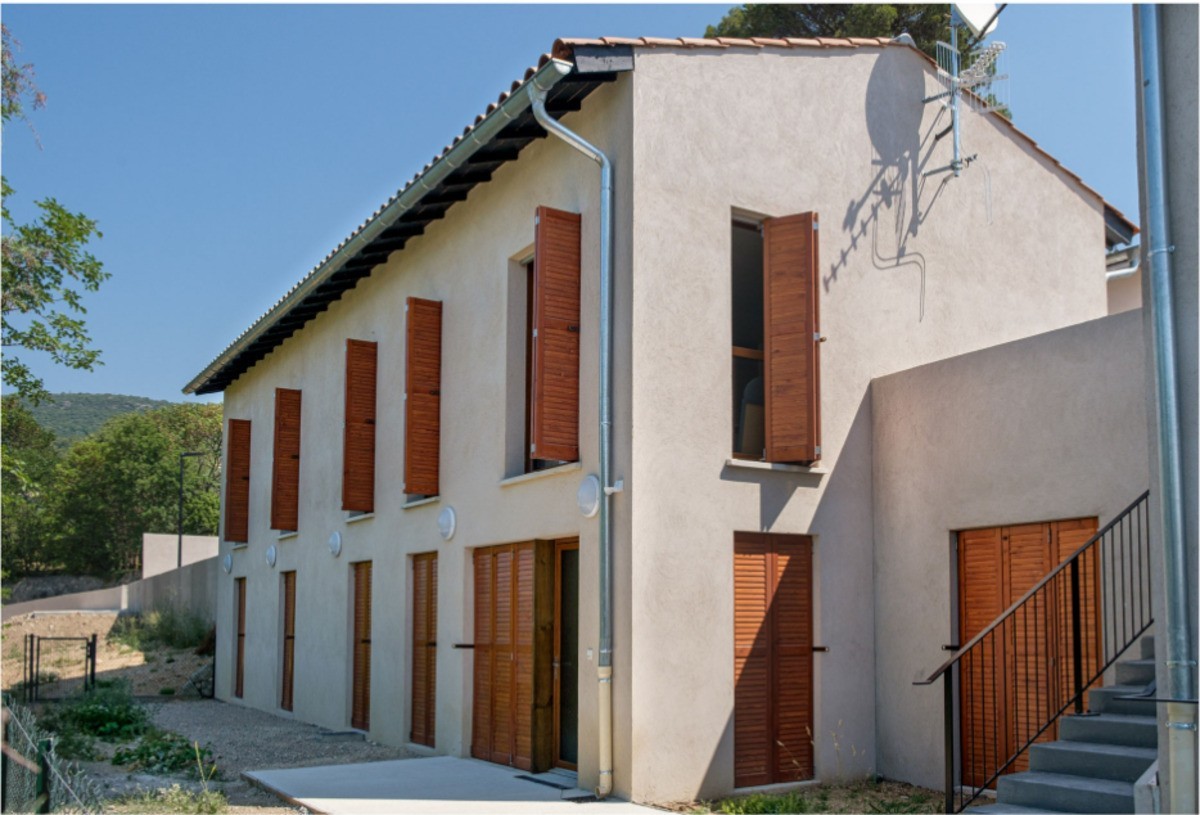 The use of sustainable materials

Just like the shutters, the frame, the roof of the terrace and the passageways are made of PEFC-certified wood (from sustainably managed European forests). The material is also found in furniture produced in France for housing units under the status of "family pension".

Regarding the facade, the walls are made of insulating terracotta bricks and cellulose wadding was used to insulate the attic. The choice of terracotta construction made it possible to control the cost of the project and to facilitate the work, its low inertia requiring little addition of insulation. It is a natural, healthy and breathable material, adapted to the relatively dry and hot climate of Draguignan. Cellulose wadding was also selected for its economic and ecological advantages. It combines well with wooden frames and brings a strong added value to summer comfort.

Finally, stones from the site were reused to form low walls.

Thanks to these sustainable materials, the constructions blend into their natural environment and have a reduced impact on local ecosystems. The choices were also guided by a concern to preserve the beauty of the site, which was originally little built.

Some difficulties were encountered on the site, in particular in terms of site constraints, and those despite the heavy planning undertaken: - Change of foundations during construction (piles to be struck off/cavities) - The collapse of a terrace made the site inaccessible

The site is made up of a low plot (an old quarry), a 15-meter-high cliff and terraced land initially comprising a 19th century bastide with a cultivation of olive trees in the upper part, all for an area of 1.6 hectares.

The hamlet is located near the city center (10 minutes walk) but in a natural setting. The property enjoys a privileged location by its surface, its topography, its own resources (water, culture, etc.), its vegetation and its vis à cis with the historic center of Draguignan and the clock tower.

Its location on the hillside required the reinforcement of the cliff and major earthworks and foundations. In order to promote soft mobility, an elevator accompanied by a footbridge has been built on the cliff to connect the hamlet to the town centre. The site is therefore reserved for pedestrians. 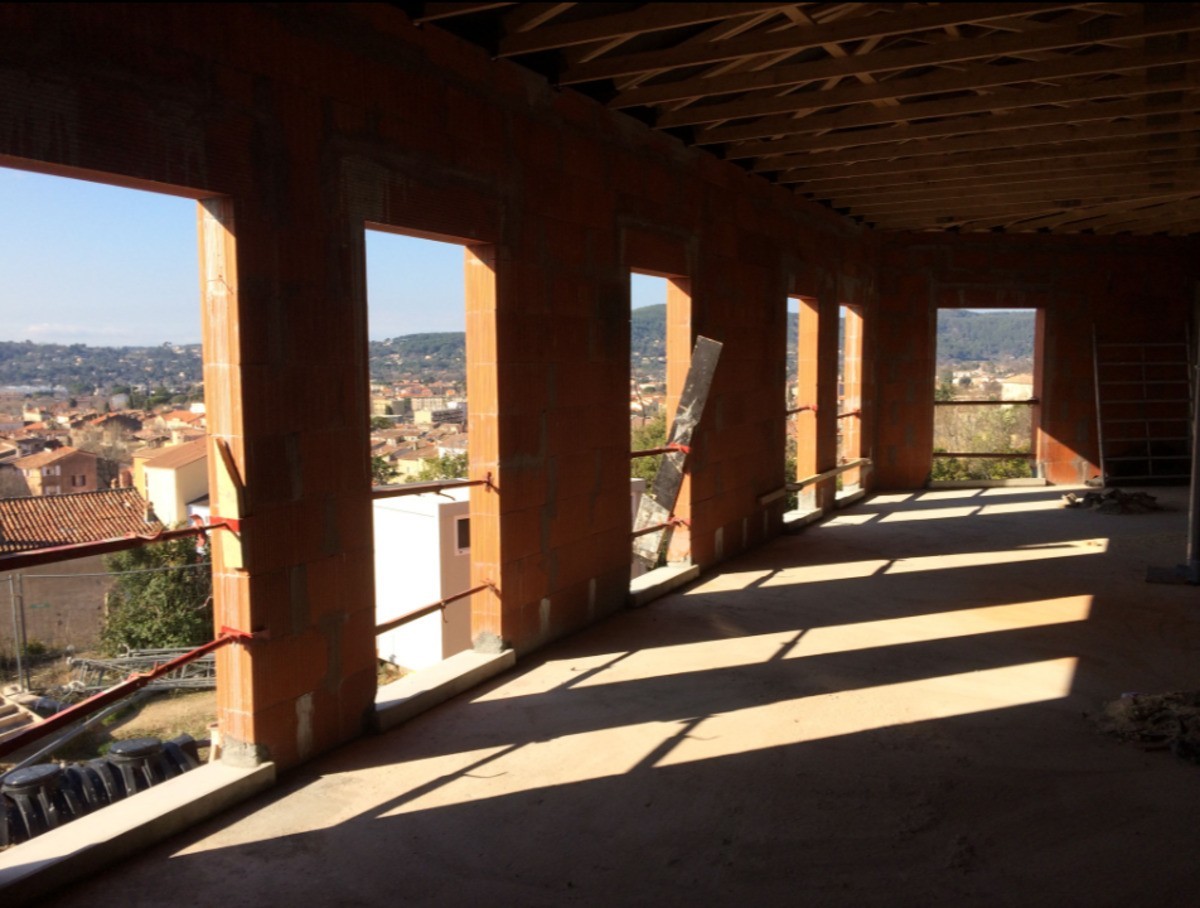 The frame of the buildings is made of PEFC certified wood. This label guarantees that a wood or wood-based product comes from sustainably managed forests, that is to say taking into account its environmental, societal and economic dimensions. It certifies that the forest owner and operator have followed these sustainable practices and that all the companies involved in the processing and marketing of the wood have applied the label's traceability rules.

For 20 years, the company SUD CHARPENTES has included its activity in a sustainable development approach through the recovery of wood from French forests (douglas fir, chestnut, oak).

In addition, a partnership with Whirlpool was established, which financed and provided furniture for the accommodations.

Stones from the site were reused to build the garden walls.

The painting of the building was entrusted to the company SENDRA . They were entirely carried out by people in professional integration.

The strengths of the project are: