On delivery, the only building in France that produces, stores and recovers electrical energy via a hydrogen station.

Delta Green is a building that meets the Passiv Haus certification requirements for high energy performance of the building.

This labeling process is not the least restrictive but in our opinion the most relevant and the most consistent with the requirements of this project.

He was also awarded in 2017 at the Silver Pyramids of the REIT (Federation of Real Estate Developers) at the regional level and ranked among the 3 best projects at the national level: Pyramids of gold.

A postulate "ALL USES" The whole of all the consumptions is taken into account.
A reasoning: GLOBAL COST at the market price by integrating investment AND operation - maintenance (all rental charges AND own consumption).
One objective: AUTONOMY To be autonomous in annual smoothing:

To produce globally more than all the consumptions over one year.

Today, we design buildings that are theoretically more and more efficient, but in reality energy consumption

realities are not mastered. The desire is to create an office building that is energetically positive, every day, and tends towards self-sufficiency. (with smoothing of annual energy consumption)

ONE OBJECTIVE: 4 CHALLENGES TO BE TAKEN

Minimize energy consumption by designing a building with low energy requirements. For this, the south and north orientations, the diffusion of natural light and the innovative materials were favored.

Achieve a higher energy output than that consumed by the building using photovoltaic panels, a wood boiler and a passive cooling system.

Store the energy produced to cope with building consumption during periods of energy deficit.

To sensitize the occupants in an awareness of their energy impact by presenting them in a pedagogical way the consumptions and the productions of energy in order to make them actors of the good use of their place of work.

The Deltagreen project places these fundamentals at the center of its design:

The goal is to give users freedom. They must be able to arrange the space without constraints. We manufacture the fixed parts of buildings in which the user will not bump.

3. PERFORMANCE OF THE ENVELOPE

"This relocation project reflects our ambitions for further development of FIDAL in the region. Our installation in these new premises, modern, spacious, functional in a very innovative building will allow us to welcome our customers in optimal conditions and to provide an even more fulfilling working environment to our teams. In addition, we are pleased to integrate this positive energy building, which is fully in line with the firm's environmental policy. "
Eric Joanne, Regional Director of FIDAL, operator of the building on 2 levels.

We would do everything in the same way but had imagined fewer administrative and legal constraints. The initial ambition was "Can we imagine unplugging the building network: 100% autonomy" In the end a self-contained building smoothed over the year the only obstacle to ambition: the costs would have imposed a balance of storage and production of hydrogen for several million euros. Incompatible with the economy of the project ... The future may allow it ...

No details yet regarding the age of the building

The objective is to obtain spaces that are not constrained by walls or columns, for this we use load-bearing facades and an intermediate metal beam that is based on the technical blocks. The facades consist of carrying needles made of steel. A false ceiling plenum conceals the central beam and the distribution of fluids. The east and west facades are opaque and are mainly used to contravene the building. The other facades are made of curtain walls.

Close to the ring road and well served by public transport, Delta Green offers easy access to all the regional capitals and easy access to Nantes Atlantique Airport and the TGV station in the center of Nantes.

On the spot, you can also benefit from aerated pedestrian paths and cycle tracks that cross the islands of offices, as well as 2100 public parking places.

And the beaches of La Baule are only 47 minutes ... 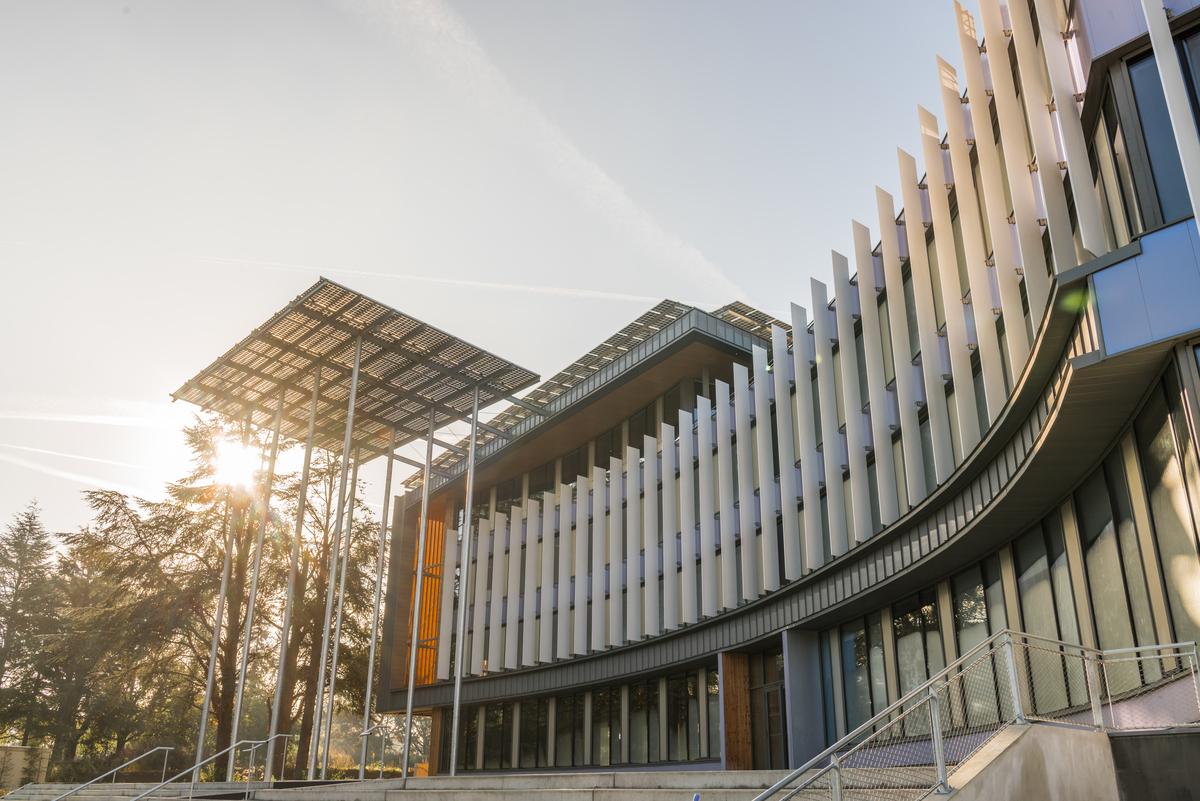 Photovoltaic production: part of the production is used for self-consumption, the rest is reinjected into the network. The entire periphery of the roof of the building is equipped with panels. A roof was also intentionally created and covered with photovoltaic panels. 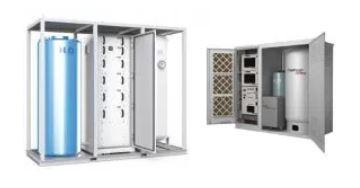 No measurement of the air quality in the building. Operation of dual flow plants during the day and on reduced time intervals at weekends

A very important focus has been on natural lighting in DeltaGreen. 78% of the surface of the trays is in natural light, but better, 100% of the workspaces are, whatever the type of disposition chosen (closed offices or open space). In addition to the reductions in energy consumption allowed by the decrease in artificial lighting, it is also the gain in user comfort that has been thought out. Caps on the south facade reduce summer solar energy intake while allowing the building to capture a maximum of solar energy in winter. To achieve these results, here are the main design factors:

20 ° C in winter 25 ° C in summer .The GTC settings have been adapted to provide comfort to the occupants

In order to improve the inertia of the building, only the central part has acoustic false ceilings. The rest of the surfaces are raw concrete. Acoustic correction is provided by hanging baffles planned according to demand.

The spines (in 10cm x 20cm concrete steel) of the Stabalux type frames, combined with 98/48 type partitions with wool of RA ³ 47 dB index, make it possible to achieve isolations between offices of 42 dB which is the objective regulation between offices.

Estimating GHG emissions in the use phase for the building per m² and per year can be feasible on energy, with this detailed 4-step methodology: Computational scope: building energy consumption (indirect energy emissions)

STRONG POINTS From the energy point of view

-In roofs for resale.

-In acroterium for self-consumption and storage

-In the shade for resale.

-Heating and cooling is provided by a complex of active slabs and a PAC system on vertical probes in geocooling.This mode of emission ensures a very high comfort for the occupants (no draft, exchange by radiation) .
- Annual global energy balance Annual photovoltaic production is estimated at 520 MWh of primary energy when the annual consumption of the building (all uses) reaches 476 MWh of primary energy.

- Smooth on the year, the building is autonomous in energy and even surplus.
HIGHLIGHTS From an environmental point of view

From a digital point of view (BIM, etc.):

- A 10-month fine job to highlight this unique concept by modeling the whole building under a BIM model.

From the point of view of uses, practices:

-A "Welcome Home" user's guide, intended for all users.