Located in the heart of the Val Fourré district in Mantes-la-Jolie, the co-owners of the Neptune tower have entrusted the BOUYGUES BATIMENT IDF-FORM ARCHITECTURE-ELAN-COGEMEX Group, via their Foncia trustee, with the rehabilitation work on the 72 units of their dilapidated residence, under a design-build contract with a 15-year energy performance contract.

This residence was experiencing major problems of dilapidation, causing significant thermal discomfort, degrading the overall image of the residence and generating high heating costs.
After a call for tenders won by the group thanks to a proposal in terms of image, budget, planning and energy savings in line with the expectations of the residents, the works were able to start in May 2021.
In just 9 months, the building envelope was insulated, the electricity, heating and ventilation systems were largely redone, as were the common areas of the residence.

Only the painting of the hall and common areas on the ground floor could not be included in the work programme for budgetary reasons. The site team mobilised, just before the reception, to repaint these last walls and give the co-owners a nice surprise.

At the end of the work, in February 2022, a new life began for the co-owners in their building, which is finally healthy and thermally comfortable, with a guarantee of a 43% reduction in real heating consumption for 15 years.

The building is an R+17 tower on the Val Fourré town hall square, built in the 1970s and visible from all sides. Our architectural approach for its energy renovation was to rely on the DNA of the building in order to bring out its strong elements and to attenuate those that should be erased. We simplified the architectural style of the building, bringing a modern and residential quality to it.

The main lines of the architectural treatment:

The objective of the project was to guarantee the inhabitants a reduction in real heating consumption of at least 43% in order to reduce their high costs. To achieve this, the building envelope was completely insulated (repair of the insulation and waterproofing of the roof terrace, application of thin plaster over insulation on the façade, replacement of external joinery, insulation of the high floor of the cellars) and the systems were modernised: the ventilation system became hybrid, the radiators were replaced and fitted with thermostatic valves, and some of the equipment in the substation was replaced.

Three meetings with the residents and the main players in the project were held during the construction period. These meetings, called "cafés copro", helped to improve communication and raise awareness among co-owners of the challenges of the project. The construction site was closely followed by the state, the municipality and the department, which were often represented during these meetings.

These meetings were an opportunity to involve the inhabitants in the progress of the building site, to better understand their expectations and to make them aware of the energy challenges of the operation, in which they are important actors.
The "copro cafés" had a very positive impact, the inhabitants were delighted to have been involved. This experience is considered by the inhabitants as "enriching", especially from a social and human point of view and they testify their satisfaction to have reached their objective: it is "the concretization of a dream which becomes reality".

From time to time, the VoisinMalin association came to relay our communication, to pass on messages or give advice to the inhabitants.

The common objective of all the co-owners was to find a healthy building that met current comfort standards, mainly thermal, and to restore the image of their residence, which had deteriorated over the years. To achieve this objective of improving the conditions of the inhabitants, the project management, the companies, the co-owners and the syndic had to come together and form a motivated team. This is a joint success.

This experience will mark the beginning of a renewal for the residents of the Neptune Tower and will hopefully pave the way for other co-ownerships.

The occupants are very satisfied with the work. We have conducted "Customer Experience" surveys with Qualimétrie, here is the conclusion of the president of the union council:
"I would like to thank BOUYGUES and the entire project team, because the inhabitants who were sulking now have a smile on their face. They are getting involved because their lives have changed thanks to the works."

The exterior carpentry was initially planned as a one-piece renovation frame (roller shutter integrated into the carpentry), which did not please the inhabitants during the site preparation phase. In order to ensure their satisfaction, we have therefore found a solution to put the roller shutter boxes on the lintels, on the inside, by removing the existing wooden boxes. Communication with residents is essential. As part of the design, you have to take the time to fully explain all the services provided to them so that there is no misunderstanding and that they are not disappointed.

The building consumed 162 kWhep/m².year before works (label D). An Energy Performance contract has been put in place for the heating station with a reduction in consumption of at least 43% compared to the configuration before the works. For information, energy consumption related to heating before works was on average 642 MWh per year (2016-2017). Thus, the energy savings achieved after the works will be at least 276 MWh/year. The work has enabled a switch from the Energy D label to the B label.

The condominium is located in Mantes-la-Jolie, in the heart of the Val Fourré district near the shops. Within the condominium, there are very few outdoor spaces, but the slab located at the foot of the tower and the spacious hall allow residents to gather, especially for "copro cafes".

We called on a person in integration to ensure the cleaning of our site offices for 450 hours during the 9 months of the site.

Many condominiums are in situations of fuel poverty which generate major comfort problems , degrade the buildings and desperately increase the heating costs of the inhabitants. There are rehabilitation solutions, allowing you to get out of this situation, while benefiting from various subsidies.

Through this application, we wish to show that innovative and virtuous solutions exist in co-ownership , in consultation with residents and that they offer them guarantees of sustainability and guaranteed savings over time . 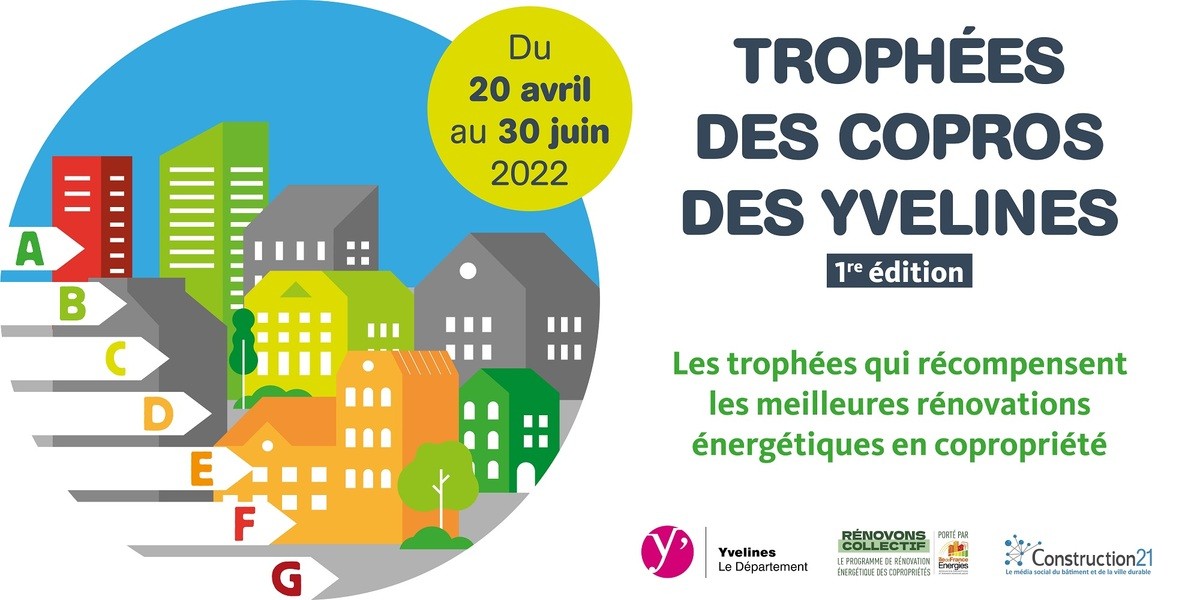