Nomadéis initiated the economic analysis of the prototypes

Financed by the ERDF through the territorial cooperation program Interreg France (Channel) England, the SB&WRC (Sustainable Bio&Waste Resources for Construction) project’s main aim is to conceive and produce three innovative, low-carbon, bio- and waste-based thermal insulants. Nomadeis, as the lead partner, is tasked with aiding the project partners to transform the prototypes into marketable products via an analysis of their respective value chains and necessary investments as well as presenting all necessary information to interested industrial stakeholder who could then tackle the prototype’s commercialisation.

The resources that were chosen for this project are :

From R&D to available products on the market

Numerous innovative products never reach the ultimate step of large-scale market sales due to countless economic, social and technical hurdles along the way. Some have even spoken of a “technological valley of death”[1] to designate this gap between the research and development stage and the mass commercialisation of a product; which often constitutes a missed opportunity for society at large. An analysis of the potential commercial viability of innovative products prior to their industrialisation lifts, in part, manufacturers and consumers’ doubts with regards to the maturity, usefulness and appropriateness of the technology considered.

At this stage of the SB&WRC project, Nomadéis is tasked with undertaking the economic analysis of the 3 prototypes of low-carbon bio- and waste-based insulation material in order to evaluate their competitiveness on the insulation materials’ market. This analysis will consist of two parts:

The economic analysis will complement the environmental evaluation (life cycle analysis, LCA) and the technical evaluation (characterisation of the material, their thermal and mechanical properties, fire resistance and biodegradability) of the prototypes. These analyses combined will allow interested stakeholders to have a multidimensional picture of the characteristics and an understanding of the strengths and weaknesses of each prototype.

Estimating costs along the value chain

Nomadéis is currently estimating the production costs for all 3 prototypes. The methodology is undergoing tests on the wheat straw prototype developed by the University of Bath. It notably consists of a simulation exercise whereby the potential operations a company would need to undertake to produce the insulant in real-life conditions.

For this purpose, two scenarios were devised:

For each of these scenarios, Nomadéis determines, with the help of the academic partners; the activities and the associated costs with the company’s management, primary resources acquisition, manufacturing of the product and distribution on the market.

Given that, today, these products are still at the prototype stage, this simulation exercise is based on a series of hypotheses and imperfect data. However, this will allow Nomadéis to give a production unit price for each prototype, and thus a potential retail price. This retail price will then be compared to more “conventional” insulation material such as rock wool, polystyrene and glass wool. This economic analysis will also provide an opportunity to identify the levers through which the production may be optimised and thus improve its price competitiveness.

These results will then feed into the massification and dissemination strategy which will also take into account parameters such as the products’ positioning on the market or the envisaged marketing strategy. 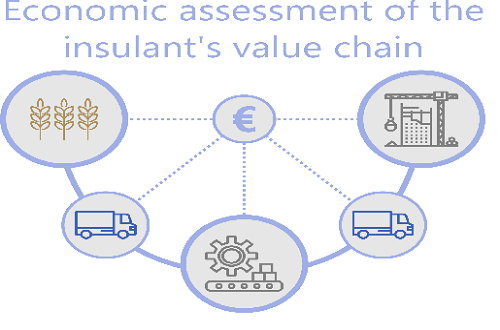 Center for Process Innovation (2016) The Innovation Challenge and the Valley of Death. Available from: https://www.uk-cpi.com/blog/the-innovation-challenge-and-the-valley-of-death