SB&WRC online survey: the first results are out!

Financed by ERDF through the territorial development program Interreg France (Channel) England, the SB&WRC (Sustainable Bio&Waste Resources for Construction) project’s main aim is to conceive and produce three innovative, low-carbon, bio- and waste-based thermal insulants. In order to facilitate the downstream industrialisation process and prepare a potential entry on the market of these future goods, it appeared essential to engage, early on, with the building sector’s stakeholders.

With this objective in mind, we launched a cross-border (England-France) survey that seeks to understand building professionals’ perceptions and expectations of construction materials made from biological or waste resources. This questionnaire is also designed to gauge stakeholders’ appreciation and interest towards the prototypes developed as part of the SB&WRC’s R&D projects.

Launched during the summer of 2018, the questionnaire, being in its initial phase, has gathered 60 responses so far. However, some preliminary results seem to emerge. These partial results will, undoubtedly, need to be revised once the survey has been completed by hundreds of respondents. For now, it is worth noting that 40% of the respondents reported using, - may it be for research or construction or are currently producing or selling -, bio- or waste-based materials. Interestingly, only 18% of the sample held some environmental certification such as the French “BBC” or the British “BREEAM”. 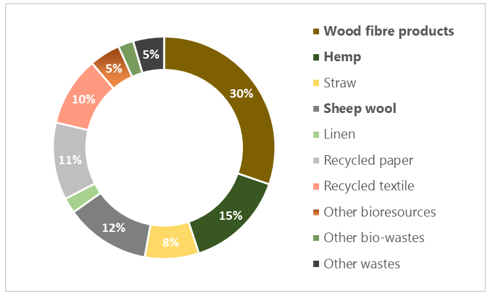 The bio- or waste-based construction materials most used by respondents. In bold, the three most commonly used materials. (Source: Nomadéis ©)

Users of these novel construction materials mostly reported (as shown in bold in the graph) using, in decreasing order, wood fibre derivatives, such as OSB panels, hemp and sheep wool derivatives. Respondents who used materials derived from biological or waste resources were primarily motivated by their own personal convictions, stemming from ecological or environmental concerns. The second motive cited was the better technical performance these materials offered compared to traditional ones.

On a more general note, respondents found that the lack of information and knowledge as well as their higher financial costs were the two main impediments to their use. The third identified obstacle to using bio and waste-based materials related to insurers’ reluctance and a relative lack of regulations surrounding their use, which hampers obtaining such things as building guarantees. Moreover, respondents who indicated not using these materials were a majority to state that clients’ reluctance was the primary reason behind their lack of use; supposedly for the same reasons already identified by construction professionals.

Lastly, regarding the prototypes developed within the SB&WRC project, 30% of respondents indicated they would be interested in using, buying or crafting if products were to be developed following the trials. It must be noted that remarks were made regarding the lack of information available at this stage on the prototypes. Notably, some concerns were raised towards the flammability of the materials. If products corresponding to the prototypes were to enter the French and British markets, obtaining certification would be important in gaining their trust. With regards to marketability: more than 50% of respondents reckoned that the bio- and waste-based construction material market will expand. In their eyes; technical performance and the certainty of obtaining building insurance constitute the main criteria that will influence, and ultimately convince, future consumers.

The initial phase of the survey thus suggests that a majority of construction professionals are, overall, interested in bio- and waste-based materials but they use them sparingly within their daily activity. It is also apparent that the choice of materials made within the SB&WRC is in-line with stakeholders’ expectations. It emerged, however, that an effective communication strategy must accompany their development in order to deliver relevant information, - such as the technical performance-, of these bio- and waste-based materials.