To limit the damage to a building during a fire, safety regulations set a number of requirements in relation to the specification of materials.

The role of building materials during a fire is assessed according to two criteria:

Since 2002 [1], construction products for which a classification is mandatory, must undergo a series of tests that simulate the first three phases of the development of a fire, in order to obtain their fire classification. Existing tests corresponding to the three development phases are shown schematically and summarized in Table 1:

When all these tests are carried out, a letter is attributed to the material according to the following European classification (Table 2):

As part of the SB&WRC project, small-flame tests are therefore carried out at Unilasalle on the three insulation prototypes:

According to standard NF EN ISO 11925-2 [2], the small flame ignitability test corresponding to the first phase of fire development (described in standard EN 13501-1) consists in placing a sample of the prototype in an enclosure (Figure 1) and applying a 2cm propane flame for 15 seconds on the lower edge of a sample of material. This test makes it possible to know the propensity of a material to ignite more or less quickly when in contact with a flame. After removal of the burner, a visual observation can determine if there is inflammation and the time during which the persistent flame has exceeded the height set by the standard of 15 cm. The presence of any inflamed droplets should be noted.

According to the NF EN ISO 11925-2 standard, materials which have a degradation zone height of less than 15 cm and do not produce inflamed droplets, have good resistance to ignitability.

Although the whole study is not yet finished, first results obtained for prototype 1 can already be presented. 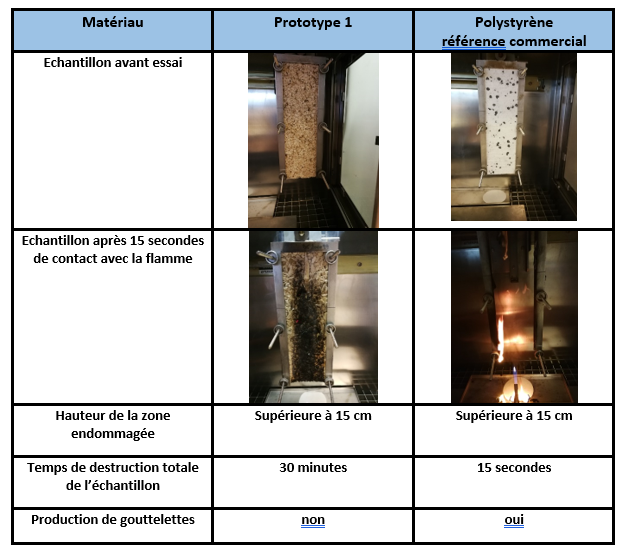 As a reference for prototype 1, we chose to compare the results obtained with those of a commercial polystyrene product.

The observations made during these first tests show that after removal of the burner, the damaged area is greater than the 15 cm recommended by the standard for both materials. In addition, particles remain incandescent and progressively consume the prototype sample 1 until complete destruction after 30 minutes. On the other hand, no inflammation or droplet production is observed.

The tests for the commercial reference of polystyrene demonstrate an immediate inflammation of the sample with droplet production. The sample is totally destroyed in 15 seconds.

At the end of this first test, the prototype 1 as well as the polystyrene commercial reference are classified E. According to standard NF EN ISO 11925-2, they contribute significantly to fire. However, this test also highlights the interest of the use of plant material in insulating panels since the resistance of the plant panel before total combustion is significantly higher than that of the polystyrene board. As weather is a crucial parameter during a fire, this saving of time is therefore a major asset for plant panels.