The WasteZone at EcoBuild 2018 presents early findings from the SB&WRC Interreg research project.

One of the biggest challenges for the construction industry will be that of acquiring the knowledge of how to effectively de-construct existing buildings from the 20th & 21st Century, as well as the challenge for the designers of new ‘circular systems’, products, and buildings that could be the ‘material banks’ for the future. There is a real need for inspiring case studies that educate and prove that there are cost-effective ways to do this, and that is why it is so important for the University of Brighton and it’s SB&WRC Interreg partners to promote the innovative research being conducted by the team. 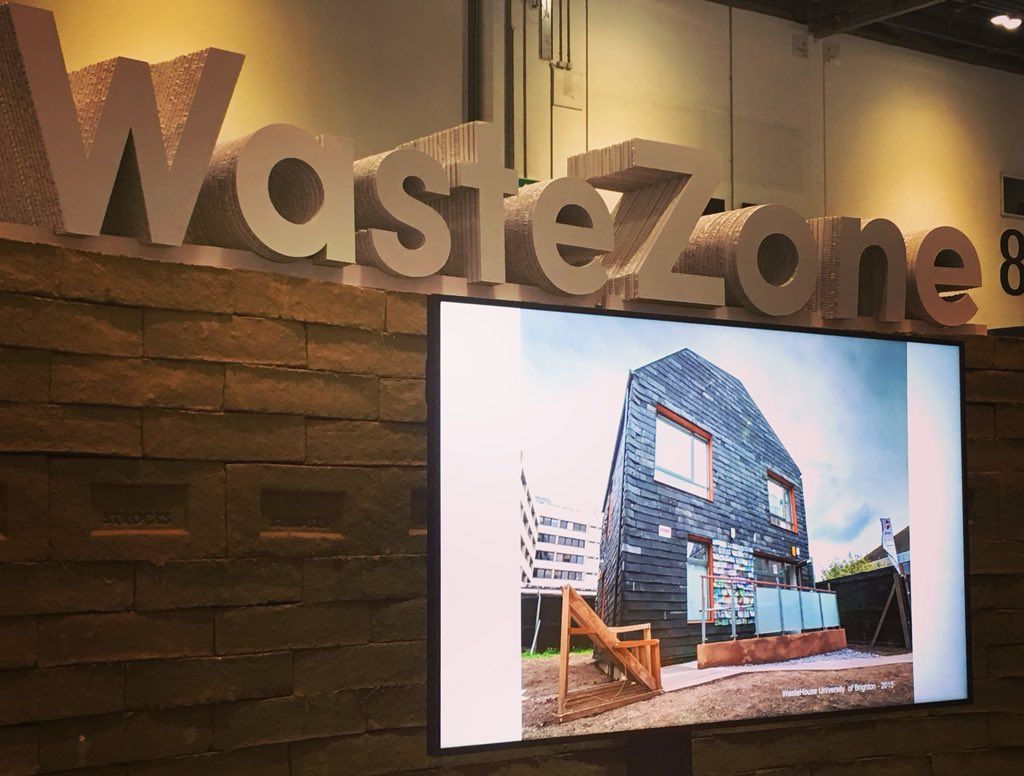 In early March 2018 SB&WRC project partners Duncan Baker-Brown and Nick Gant from The University of Brighton curated ‘The WasteZone’ at ‘EcoBuild’ in London. Over 30,000 people visited Europe’s largest construction fair between March 06th-8th. The WasteZone was a symposium where over 25 speakers from Europe and the USA discussed some of the innovative design solutions to what appears to be the huge task of cleaning up our waste plastic and other toxic materials that wrap Planet Earth after 100 years consuming materials such as plastics that have no end-of-life strategy. Speakers were broadly divided into two categories; those dealing with ‘the great clean up’ of planet Earth, ie. recycling or reusing pre-processed material normally designated as waste, and those proposing new materials and products that will one day turn to compost. Both strategies could help to enable an emergent Circular Economy.

Speakers included Prof. Walter Stahel who pioneered the concept since the 1970’s, Prof. Michael Braungart who wrote the hugely influential book ‘Cradle to Cradle: remaking the way we make things’, as well as emerging designers such as ‘The Living’s’ David Benjamin who builds with bricks made from mushrooms and has recently been described by Rolling Stone magazine as “one of 25 influential people to watch out for in 2018”. Emerging thought-provokers such as architects and de-constructors ‘Rotor’ from Brussels who disassemble buildings one screw at a time and then re-assemble them as good as new, Kresse Wesling who buys up the worlds supply of damaged fire hoses as makes them into handbags (among other things) explained how they do what they do while making a living at the same time. 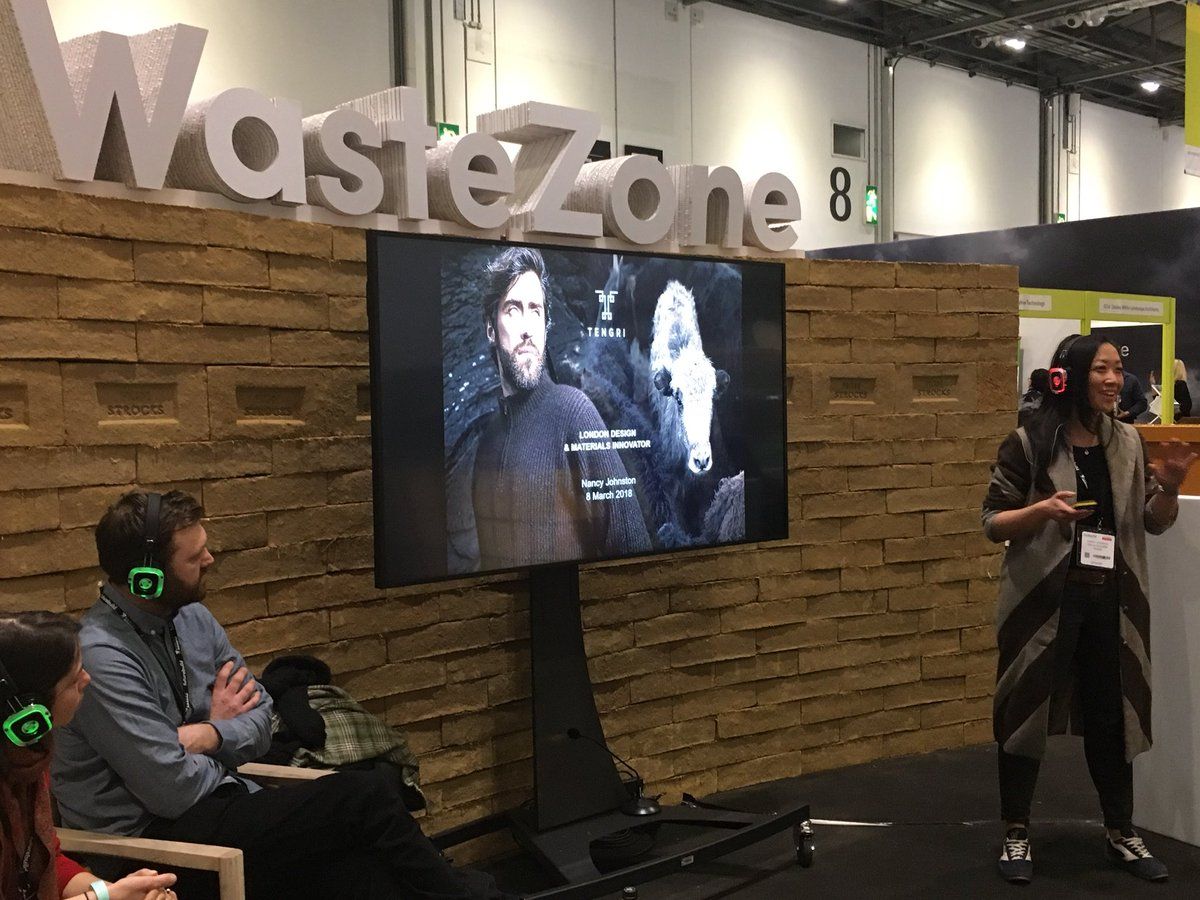 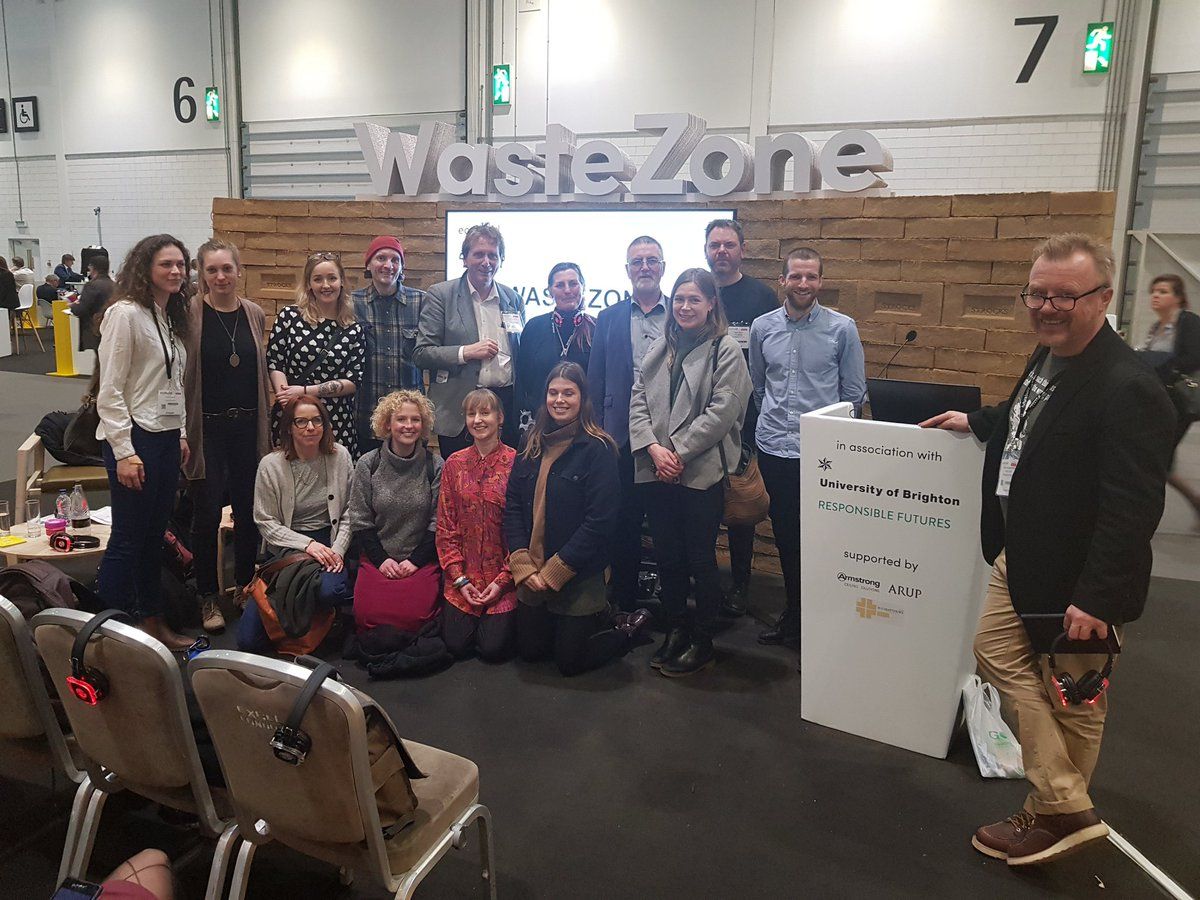 Ocean plastic waste is now a high-profile everyday issue. There has been a massive amount of press coverage regarding the problems it has created for Planet Earth, and of course it is one of the main motivators for our own SB&WRC Interreg research programme. The WasteZone (sponsored by The University of Brighton’s Responsible Futures and international consultants ARUP) provided an opportunity for material scientists, academics, designers, architects, waste managers, and policy makers to exchange ideas for inspirational solutions to the problems of waste and over consumption.

Early findings from the University of Brighton’s recent SB&WRC Interreg research into textile waste streams was presented by Ben Bosense of ‘Local Works Studio’ and principal investigator Duncan Baker-Brown. Early experiments considering waste aggregates, sea shells, feathers, and polyester gathered from discarded bedding, were displayed as part of the exhibition that accompanied the symposium, which was over-subscribed by 50%, attracting over 1,350 visitors, many of which stated how inspired they were by the variety of speakers and exhibits on show. 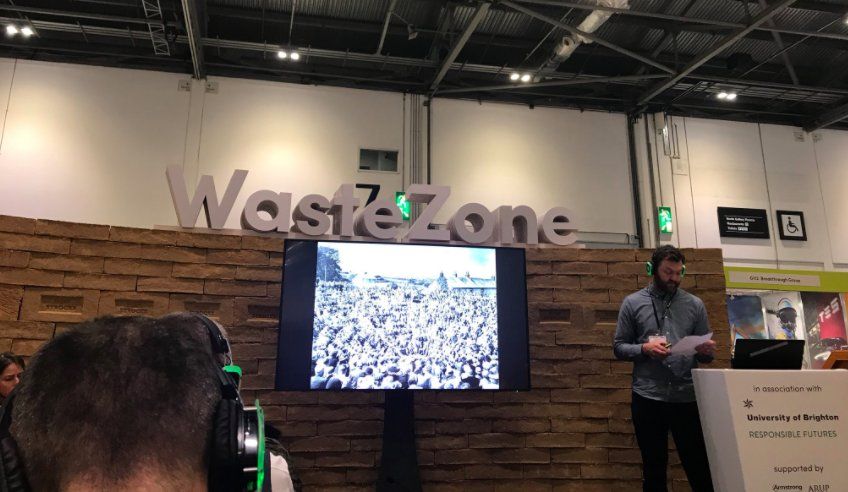 Cat Fletcher (Reuse Manager Brighton & Hove City Council) and Waste House partner stated, “We really need to talk about over-consumption. Time’s up on the pointless manufacturing and buying of stuff that we really can live without or stuff that we already have enough of, that can be reused for eternity.  Not only do we need to redesign things for repair, durability, and easy recycling, and escalate delivering circular economy friendly infrastructure to get us out of a poisonous polluting linear economy, we also have to face the reality that we simply make too much pointless stuff and that has got to stop.  Let’s make less stuff and make it better. That’s needs a lot of buy in but the planet depends on it”.

Duncan Baker-Brown said “A true circular economy requires the re-design of systems, services, new materials, products, buildings; whole cities even. I believe it will be the designers and architects, as well as the makers and constructors, who will step up to this important task. We have the knowledge now. We know what to do. For example, we can currently recycle or re-use 95% of the material that makes a smart phone. We just choose not to”.

Speakers challenged preconceptions regarding what is possible, whether you are in the construction industry or more interested in product design, fashion and textiles. The WasteZone also proved that people from different industries can learn from each other to help prove that “there’s no such thing as waste, just stuff in the wrong place’.