Within an European architectural competition organized by the “Fond d’urbanisation et d’aménagement du Kirchberg” (FUAK) for the construction of three buildings with a social purpose, STEINMETZDEMEYER won the 1 prize. .It is the first time that “Société Nationale d’Habitation Bon Marché” uses external architects.

For these three housing buildings including offices and medical services located in the Grünewald district in Luxembourg - close to the hospital - the FUAK and SNHBM have the will to provide buildings with quality materials and urbanistic design, while respecting social buildings requirements.

Even if they asked a label B building, we decided to build a passive label A building. Indeed, we decided to focus not only on construction cost but also on energy efficiency and maintenance.

In order to meet the financial challenge, we used corridors which limit considerably equipment costs and charges. The number of elevators and thus costs per apartment is divided by 2. .For these social housing, our motto is to provide the best living conditions for all.

We provide multiple solutions. First, our project uses replicability and standardization, in order to minimize construction, maintenance, acquisition and exploitation costs. Second, our project highlights the life quality of all the units by a south/west orientation of living rooms, with large windows that optimize lightening and space. The use of triple glazed windows combined with the south/west orientation improves the global energy performance, while the terrace and the loggia contribute to the overall well-being and safety. FUAK and SNHBM have also chosen to invest in materials related to their purpose (fiber cement panels for external siding- providing long term efficiency, wood for loggias- providing individual comfort and intimacy). By this commitment, SNHBM aims at providing more than just social housing but also a balanced life style.

The goal was set in the restricted architect competition program organized by FUAK in 2010. The program included offices and medical offices on the ground floor and apartments for rental purpose in the 2A building (Altaïr 20 app.) and apartments for sale purpose for 2B and 2C buildings (Deneb 20 app., Vega 28 app.). The program and the urban template were fixed in the special requirements of the competition. The energy concept asked to design the housing buildings part with a triple A energy label. The objective of the SNHBM was to create low cost housing with a modern architecture and durable materials and quality. The winner of the contest (STDM) has respecting the announced program, choosing economical and simple solutions but with high aesthetic quality.

When compared to previous projects, the main difference was the scale of the project (68 units with offices, medical offices and two underground car parks). From a design viewpoint, STDM gave us the opportunity to build for the first time units with corridors limiting the number of elevators to one per building. These buildings also enabled us to achieve for the first time a durable facade coating with cement fiber rather than insulating plaster facades we normally realize. The green roof area was significantly larger than our previous achievements on flat roofs. The buildings are connected to district heating.

We would not have considered substantial changes.
Sometimes, for economic reasons, the initial choices of the architect's office have been modified and may lead to improvements, but sometimes they also lead to suboptimal results. For instance, the metal passageways originally planned by the STDM office in powder coated steel were changed on our request during construction to galvanized steel. However, the quality of galvanized steel did not fully satisfied us later.

The buildings are occupied since December 2014. Overall, people seem to be satisfied with the buildings: except few claims regarding entrance doors on corridors (heavy and difficult to manipulate because they had to be fireproof), we had no criticisms. 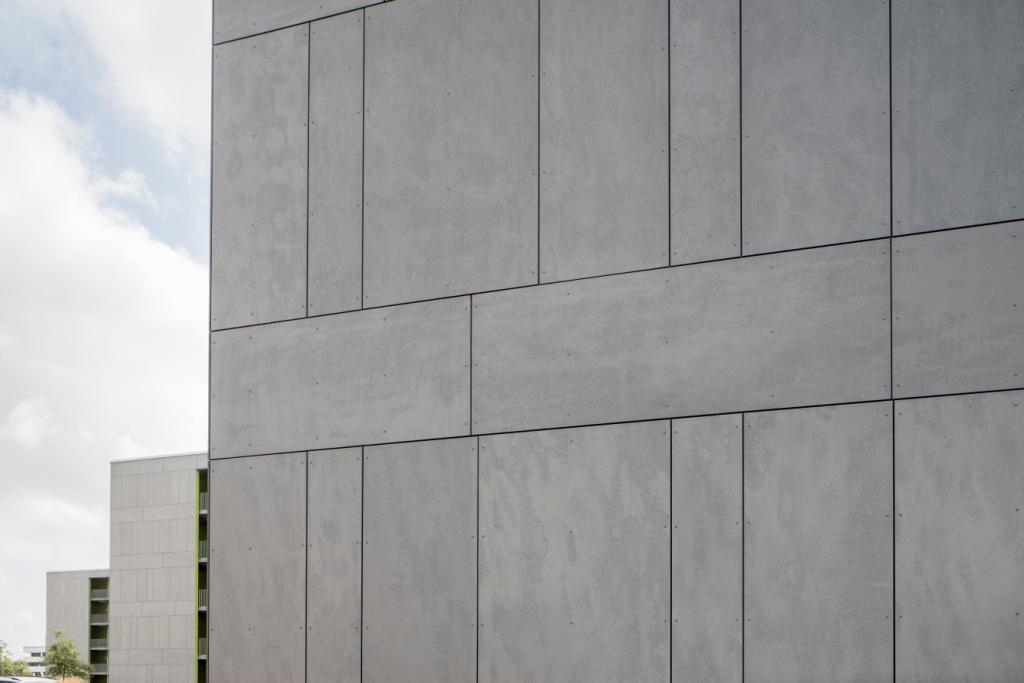 The buildings were clad in Eternit panels on the majority of their facades. This had the objective of increasing the durability of the building in time and reduce maintenance requirements. Only the facades of the protected walkways were coated weatherproof. It was a decision dictated by reasons of cost, since it is social housing.

Production Method:
ETER-COLOR sheets are manufactured on a Hatschek machine double pressed, autoclaved, calibrated and polished.
Then ETER-COLOR is made waterproof on two sides.

Color :
The ETER-COLOR plate is colored in the mass. ETER-COLOR is also characterized by natural shades of color of the plate, also shades due to the orientation of the panel, the viewing angle and to the effects of light and moisture. The plate becomes a little clearer when aging. The surface of the plate is characterized by a thin line of sanding and white tips and other inclusions.
In order to have an overview of the standard colors, please refer to the most recent ETERNIT chart. It is technically impossible for the chart to reproduce the colors exactly in line with reality. A final choice of color should be made based on samples. Other colors are also available on request only for a sufficiently large amount. Color shades are measured according to a simplified CIELAB color model in which only the light shades are controlled. The differences are tolerated on a facade GL * = 5.0. Special care was taken in choosing smoke vents. The majority of outlets size required in this project have a PVC frame that does not have good thermal insulation values. A booster frame was installed to better encapsulate the outlet and its concrete base for the insulation of the roof. In addition, the model we chose has an airgel plate which reduces the U value of the outfall. It also improves the distribution of light. Thanks to that, the staircase enjoys good natural lighting.