​
Steel Farm is located near Hexham in the North Pennine Area of Outstanding Natural Beauty (ANOB). Built using traditional construction technology it is the first Certified Passivhaus in Northumberland.

As organic farmers they owned a plot of land where they dreamt of building a comfortable, low energy home that could accommodate them in their old age and minimise their impact upon the environment. They longed to build their own sustainable low energy home so that family could come and stay. (In the winter of 2011 Trevor and Judith Gospel were renting a small, gloomy bothy. That bitterly cold winter they found that the inside of their fridge was warmer than the living room.)

Delicate negotiations were undertaken to demonstrate the value that the project had to offer the local and regional economy, and the environment. They also saw the removal of a requirement to provide tabling and two chimneys. Ultimately all of these criteria were fulfilled without compromising the client’s desire to achieve the Passivhaus standards of performance.

Planning permission was received in September 2011. Construction commenced in June 2012 and was completed in February 2013.

Trevor and Judith now live in their spacious new, home. The walls are washed with natural daylight and the windows frame views of the rolling hills (allowing surveillance of the livestock). The lights are rarely used.

A three part documentary series about the project is available at www.PassivhausSecrets.co.uk

Definitely train the site trades before starting on site. We did and risk was reduced significantly.

Trevor Gospel "The construction of our new home has been a real adventure; challenging at times but, all in all, well worth the wait. Both Mark and Joe have met and exceeded our expectations. We had a limited budget and stuck to it. I don't think that we could have been in safer hands."

Judith Gospel “In our old accommodation, a winter or two ago, 2011 I think, we measured the temperature of the fridge and the living room. At one point it was warmer in the fridge! More than the savings in the energy bills and the reduced environmental impact, we are enjoying the comfort of our new home."

A digital programmable room stat is used. Radiators are fitted with thermostatic valves.

In practice the digital programmable room stat has proven to be more complex that was desirable.
As the dwelling is a Passivhaus, and space heating demand is already minimised, controlled can be simplified even further. In future a simple seasonal On-Off switch will be used (On from September, Off from March).

The precise amount of electrical energy used by the house can not be determined because the electric meter is used for the whole farm. 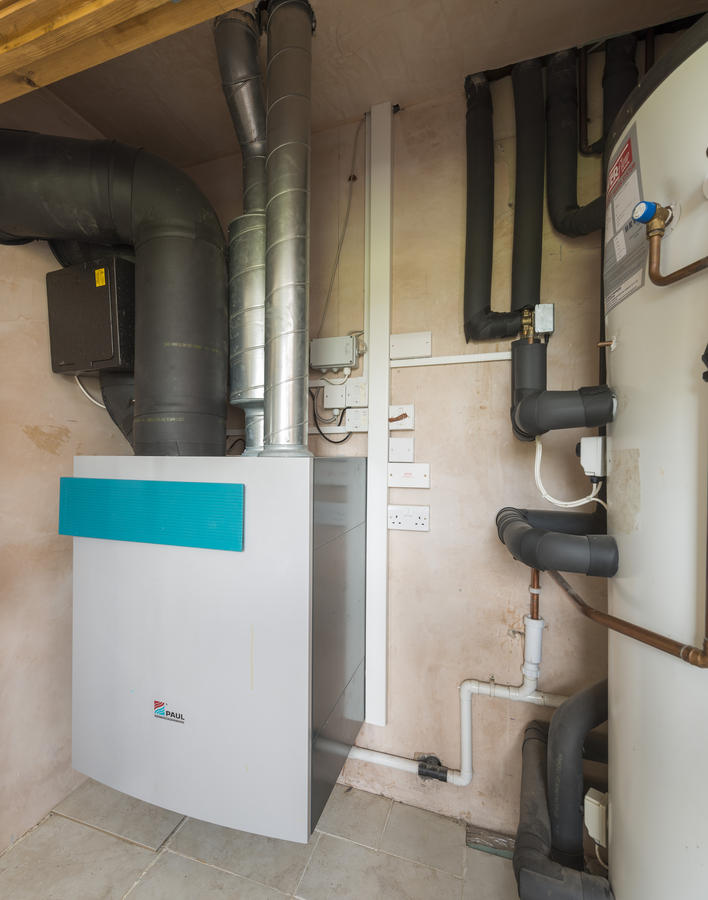 Rural location. As an opperational farm house the dwelling is accessed by car. Public transport is not available. The site is located near Hexham, Northumberland. North East England.

Low flow fittings, a compact services plan, a microbore plumbing system was utilised so as to minimise the volume of dead legs (< 1.0 litres), and the storage cylinder was superinsulated (100mm compared to standard 50mm.)

Average temperature over the Year 20.3C

Refer to Health & Comfort above.

PHPP calculations used to estimate energy use and carbon emissions

NOTE: There is no sub-metering to differentiate between space heating, DHW and cooking. Dates of purchase for the 47kg cylinders have been used to approximate the energy demand as the use of unmetered LPG cylinders prohibits absolute accuracy of measurement.

Conclusion: The house appears to perform in reasonable alignment with the PHPP calculations.

As an active farm the electricity meter issued to measure both the supply of the farm equipment and lighting as well as the household. The client determined that the cost of sub-metering was determined to be an extra, unwarranted expense.

As farmers Trevor and Judith Gospel recognise that they are custodians of the land.

The rolling landscape of Northumberland is a jewel in the crown of the North East. Just as a precious stone compliments the band of a ring they wanted their home to compliment an Area of Outstanding Natural Beauty.

They wanted the patina of time to enrich their home and the character of the house to develop over decades. Its purpose being to respond to, enrich and evoke a sense of place.

Yet they did not want a traditional house. Nor did they want a home that was alien to its setting. They wanted a characterful home that is harmonious yet distinctive, memorable, unique and meaningful.

Steel Farm comes from the earth. The sun kissed walls are natural stone drawn from the quarry nearest to the site. The roof is Cumbrian slate. Details beguilingly appear to echo traditional design, yet in practice radically reinterpret the past.

Inside the house daylight washes the interior as the windows are positioned, sized and proportioned to carefully frame views across the land and toward the fields where sheep roam freely beneath dramatic skies.

Watch the full documentary about the design and performance of Steel Farm at www.PassivhausSecrets.co.uk