​​Kwel Ka Baung schooling project is supporting and educating around 450 migrant children in Karen Community of Mae Sot on the Thai-Burma border. The current school location became under scrutiny when the current land owner decided not to extend the lease for the school ground after May 2014. To ensure that the school would be able to continue its education program and new location had to be found and a new school had to be built within two years. a.gor.a architects had been asked to design the new school campus and to construct the school with the help of the local community. Casira, an organization from Quebec, Canada, was able to raise funds for this project over a period of two years. Casira also traveled to Thailand in 2012 and 2013 to participate in two workshops, each of them over a period of four weeks. In June 2014 the Kwel Kah Baung School the new school campus opened and the students moved into their new classrooms.

Kwel Ka Baung school ground was located inside an abandoned hotel resort near the old central bus station. The land owner of the resort allowed the school to use the existing buildings as classrooms and boarding houses for the students. In2012 the surrounding area got developed further and the existing bus terminal got renovated and increased in size. Acouple of night clubs opened at an adjacent piece of land. Thai night clubs,with live cover band, are generally operating until the early morning hours.The noise which was generated made it impossible for kids to sleep at the school and being able to focus on learning material during the days. Due to the fact that new night clubs popped up, the area around the existing school became more popular, which resulted in increasing land prices. Once the land owner realized the opportunity of renting or even selling the land for more money, he cancelled the lease with the school headmaster and gave a one year notice tot he school council to abandon his land. A long term solution to solve these issues had to be found soon, to ensure that Kwel Ka Baungs’s education program would be able to continue at a different location.

The motivation for this project was to make sure that Kwel Ka Baung migrant learning center would be able to continue its very effective education program for 450 students on the Thai Burma border. One of our main objectives was that the migrant communities which are living close by are getting involved during the construction phases. This is a way to ensure, that the feeling of ownership will intensify and that future maintenance can be done without external support.

Kwel Ka Baung Migrant Learning Center teaches all grades from 1 to 8 as well as Kindergarten and Nursery while food is mainly provided by local community based organizations and private individuals. For the new school campus a.gor.a architects therefore had to design a school campus with 10 classrooms + one teachers room, 1 dining hall/kitchen facility as well as a library building. Each classroom should give space to at least 25students.

self made adobe bricks 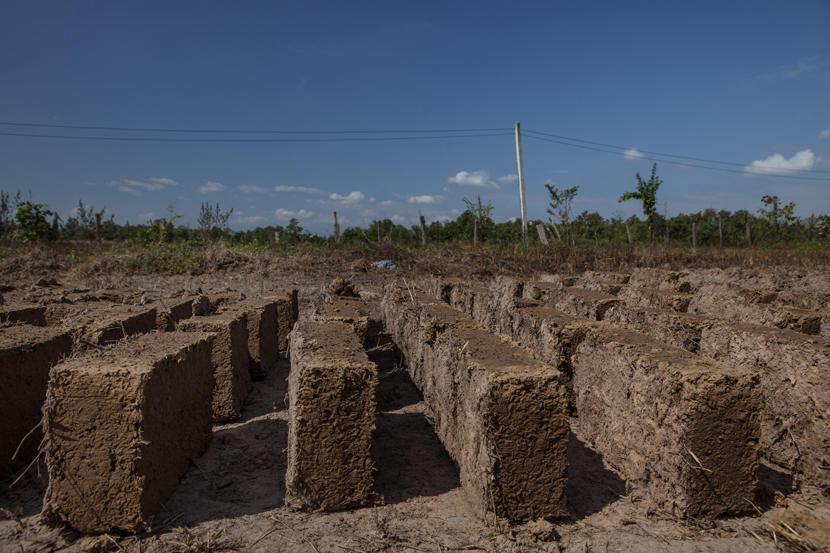 For the building material adobe was chosen, which perfectly meets the challenges of a tropical climate: indoors are kept cool through the day and just little maintenance is required after the rainy season.

The preparation of adobe bricks is not only free of cost; it is also a fun activity for the local community. After completing the school compound, more local people started using adobe as a construction material.

The school was build near an existing Lotus pond in the outskirts of Mae Sot. The school is not connected to the local public transport and there are no shops or other activities near by.

​The school has been arranged in a way that each classroom becomes its own building facing a garden space. Classrooms would never share a wall with a neighboring classroom. this ensures that noise cannot travel from one classroom to another and that a good natural ventilation can be achieved.

For the building material adobe was chosen, which perfectly meets the challenges of a tropical climate: indoors are kept cool through the day and just little maintenance is required after the rainy season. The preparation of adobe bricks is not only free of cost; it is also a fun activity for the local community.