In order to develop the digital (deployment of Collaborative Communication Infrastructure: ICC) and to do so permanently enter the campus in the digital age, the Loire Bretagne University (UBL) wished to build the following 4 buildings :

The development of the ICC is mainly effected within existing buildings. These four buildings, are not only a showcase of the project, but the only visible parts from outside the developed digital campus. They thus have a strong role not only from a functional point of view but also in terms of symbol and image to UBL C @ mpus particularly and UBL in general. The UBL hoped that the design falls within an Environmental Quality approach and hopes that the candidate obtains the certification issued by CERTIVEA H.Q.E® 2011.

The UBL brand and its environmental concern and adopt a sustainable development approach which is now recognized in all economic sectors and is reflected in the building by an approach known as "High Environmental Quality". On the other hand the four buildings are under a performance contract between the manufacturer and the UBL. The case study below focuses on the Pole Digital Rennes Beaulieu building.

UEB has indeed since phase program engaged in environmental quality approach to obtain the NF HQE certification issued by Commercial Building Certivéa. This approach is part of a general search of quality construction to limit building impacts and consumption of natural resources while ensuring a healthy and comfortable environment for its users.

To do this, UEB has used PPP, led by the project company Breizh Connect. Under the PPP, the company Breizh Connect project is surrounded by technical service providers for the different phases of the project, a group of design-build batimentaire composed of Eiffage Construction Bretagne, the architectural firm of Michel Remon, Egis prime contractor buildings and digital design-build group which Orange is representative. The mastery of work teams, a control layer was added. It consists of a control office Socotec, an assistant in general contractor for environmental work EGIS, an assistant in general contractor of INGEROP for technical book.

In the idea of ​​bringing together four digital poles despite their geographical distance, the architect wanted the buildings, by design unit, through their frontal, their input sequence and lobby designed "uniform", prepare geographical scenery to better build the virtual gathering, the "connection" of their users.

For this, he put the key piece of each building, Hall developed atrium to unite the functions it serves facing the same landscape element, a landscape element that brings together: the sky of Britain.

The architect has a plan area around a principle of any height Hall conceived as a "connector" functional units it serves. The various program elements are then connect to this center, forming a principle figure of a cross. Telephoto amphitheater form one of the branches of this figure. The entrance directly reaches the center of the figure, the lobby, along the monolith of the amphitheater. Circulation levels of lead in the hall balcony on each level to assert this desire to bring together users of each building.

The route to this entrance to the raw concrete monolith of the amphitheater, then sets
"Site layout" for each building.
The facade treatment is exactly the same for each of the four buildings:
- The figurehead of the TV amphitheater is covered in gray plain poured concrete with insulation on the inside, carefully treating the thermal bridges.
- The volume "slipped" above the amphitheater block is coated with gold metal cassettes with external insulation.
- The rest of the facades is coated panels Eternit NATURALIS clear, tinted, with exterior insulation.
The openings are of four types:
- Horizontal windows the same height in the "branches grafted onto the lobby
- Large rectangular windows on the volume "or" raised above the TV amphitheater (A vertical identical protected bay of shading / visual barrier illuminates one side of the amphitheater)
- Large curtain wall surfaces for the frame entries in buildings
- And a large window framing the sky Breton, resulting from the projection of a rectangular figure from a particular point of view when in the lobby, projected on the façade as an anamorphic Georges Rousse or Felice Varini.

The occupants are already well fitting places, digital cinemas and places of conviviality and exchange. The uses are in line with expectations of the UBL. The building is very bright, thanks to floor coverings, suspended ceilings and paintings chosen but also the choice of openings and views.

The fact that Breizh Connect site maintenance for the next 25 years to the Eiffage teams provides strong reactivated if intervention requests made by users. The cost of this maintenance is included in the total rent paid by UBL to Breizh Connect. The amount was developed by a global reasoning and cost effectively during the Competitive Dialogue PPP by many round trips between the designer and operator.

Very compact building with straight and uniform facades.The choice of exterior insulation reduces thermal bridging of floor nosing and to offer buildings a high thermal inertia, which, associated with nocturnal ventilation can delay the temperature rises in the summer.

The PNRB is connected to the district heating network. Space heating is provided by low inertia radiators (that optimize consumption per unit based on internal and solar gains), except in the lobby where floor heating is introduced, and in amphitheater where the air handling unit equipped with a CO2 sensor provides the dual function of ventilation and heating period of occupation.

Two other air handling units are installed for ventilation of premises, in addition to mechanique controlled ventilation in sanitary and other premises with specific pollution depressurized. Digital classrooms are treated to blow into the local and extract it to a technical cabinet, it helps to have a good scan and to confine the heat loads of the servers directly in the ventilation extraction.There are no active cooling except in the control rooms of shooting and recording studio where internal heat gains are the most important.

A building management system is in place, it allows it to monitor, program and control the production equipment and terminal equipment, monitor consumption and interact with users (display in the lobby).

The PNRB Beaulieu is located on the campus at the southern entrance from the Avenue du Général Leclerc.
Beaulieu campus is part of a district located in the northeast quadrant of the city, the neighborhood.

By 2020 , the building will be at 5 min walk from Beaulieu- Etoile Station Line b metro Rennes. Meanwhile, the site is served by several bus lines in the northern part , on the avenue General Leclerc , the station the most interesting being " Tournebride ". The majority of the lines to take Republic in the center of Rennes in a sense, to the municipalities west of Rennes in the other. 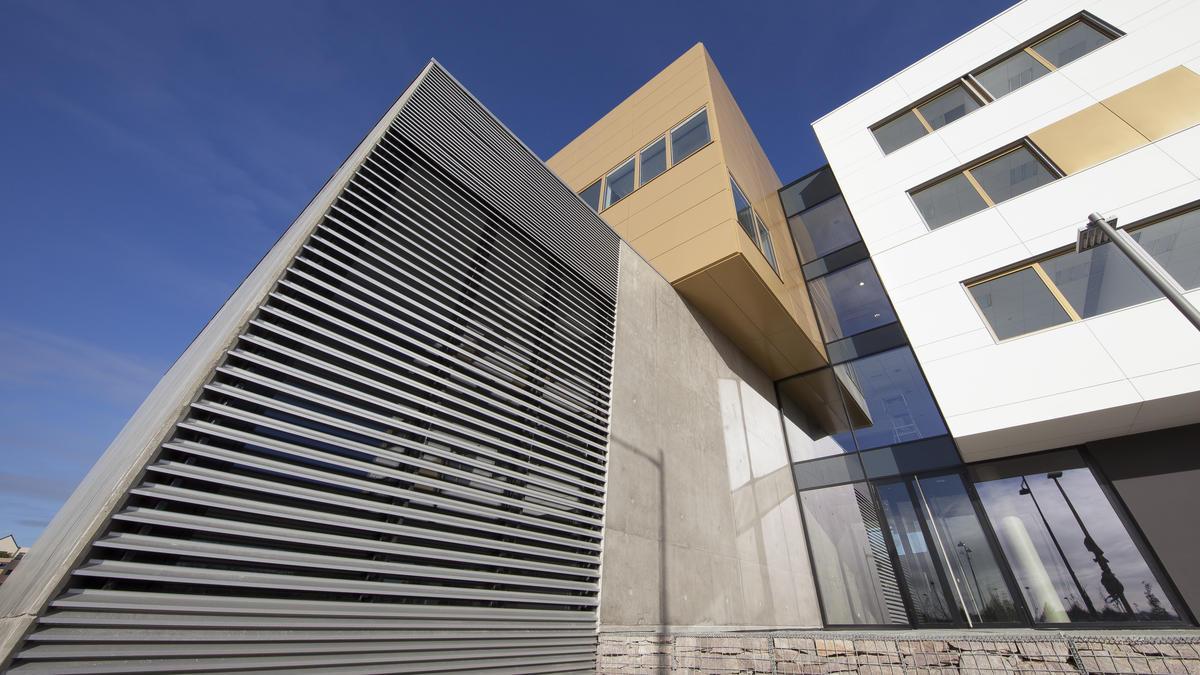 Breeze venetian blind connected to the building management and the weather station. They are controllable by the user and programmed to follow the set technical management of automatic building every hour. This reduces solar heat gain or heat loss according to the seasons.

Difficult appropriation by the users, it is necessary to teach the user to use them wisely.

The drinking water needs were estimated by Certivéa calculation tool.

Soil coating materials, wall and ceiling paintings and interior woodwork in contact with indoor air are class A to a minimum. The main external sources of odors are related to vehicle traffic on the outer lane and parking. The windows have no permanent air and inlet air is introduced from the CTA located on the roof.Internal sources are the local waste, sanitary and reprographics. The creation of local is related to functionality, they are treated depression by a simple flow ventilation which limits transfers of issuers odors.

Hygrothermal comfort:All premises are equipped with radiant certified transmitters with thermostatic control (EUBAC) which regulates the more finely the temperature in each room.The amphitheater is equipped with an air handling unit that provides ventilation and heating in the period of occupation. The air handling unit is equipped with a CO2 probe on the recovery that allows to operate the ventilation according to the random occupation of the amphitheater.Sunscreens implemented so that users can act on natural lighting are external directional suns breezes related to building management or internal blinds adjusted by the occupant.Consistent with the objective, 100% of the premises extended / sensitive use have access to daylight and views outside (not digital program). The only local blind are some technical areas, some local storage are not to be converted into offices, and some traffic.

Many steps have been taken to optimize the acoustic performance of the building - the sensitivity of some local vis- à-vis the outside noise was taken into account by building facade insulation goals + 2dB ( rooms education , training ... ) - for premises where the acoustics are particularly important are reduced volume. The internal acoustic treatment can effectively overcome the constraints of volume and forme.- For TV amphitheater , the volume is slightly higher than necessary height of the false ceiling is adjusted to obtain a more suitable volume . - Acoustic panels are set up in the TV arena , the lobby and the governed. 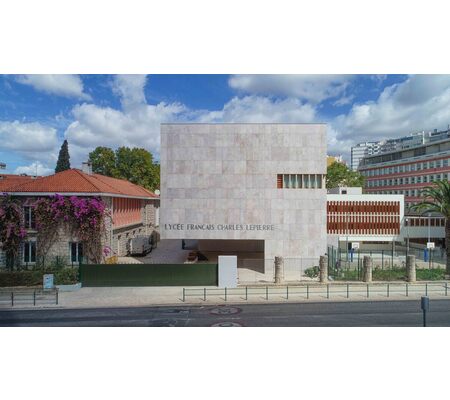 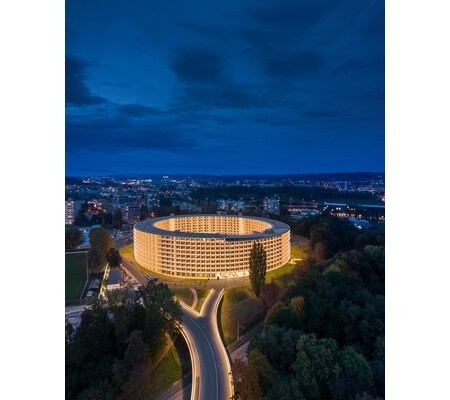