Green Office ® is the registered trademark of Bouygues Immobilier for a new generation of positive-energy buildings. The architectural concept of the project is based on the analysis of the place and more specifically on the peculiarities of the site.

The Project is treated as a lot but it actually includes two distinct buildings destined for offices. Both occupy a total net floor area of 35,000 m², with respectively  in 19,256 m² for the East Building and 15,744 m² for the West building. The volume of the project is a response to the constraints arising from the creation of the future soft traffic, the location of railways and the strengthened connection to the Robert Schuman plaza, located between the existing building Arval / Cortal and the Ibis hotel.

The resulting form is a curve slipping between the constraints and molds to the irregularity of the site. The buildings are located between the railway tracks on the south side and the Jean Moulin residential area on the north side. This location also works as a sound barrier. The project was developed by taking into account a strong environmental preoccupation and following the GREEN OFFICE® concept by  Bouygues Immobilier a pioneering concept of tertiary buildings.

The project was developed following the GREEN OFFICE® concept created by Bouygues Immobilier. It was designed as a new architectural and technological balance destined to become a reference in energy efficiency and comfort.

GREEN-OFFICE® RUEIL goes beyond the recommendations of the French thermal regulation (RT 2012) while aiming for several international certifications (HQE, BREEAM ...). It perfectly responds to the growing concern of citizens on global warming and decline of fossil energies.

Energy management of each building enhance simple and economic principles through:
• reinforced isolation
• smart management of energy-using equipment,
• suppression of false ceilings to use the thermal inertia of concrete slabs through which cold and hot water networks circulate.
• The proximity of a train station and many bus lines, offering exceptional accessibility by public transportation.

The building also uses future renewable technologies:
• geothermy for the needs in heating and air-conditioning
• photovoltaic panels to produce electricity

This project goes for "smart" approach and aims to benefit as much as possible from its linear implantation. With a facade fully exposed to the south, the management of motorized shading devices allows to precisely dose the natural light in offices while minimizing the energy impact of the sun on the facades. Therefore, the cooling requirements are drastically reduced.

GREEN-OFFICE® RUEIL rethinks the comfort of its inoocupants. They become proactive in their own comfort and from their workstation they can manage the lighting, heating, cooling, variation in shading,…

The lighting, which constitutes a very important source of energy consumption in old generation buildings, becomes intelligent in GREEN-OFFICE® RUEIL. The management system automatically differentiates between working areas by the façade or in the background by using probes and presence detectors.

Energy consumption and production are managed in real time by a comprehensive BMS (Building Management System) that optimizes the energy balance.

Nearly 4,000m² of photovoltaic panels on the roof effectively participates to the production of renewable energy, while providing a unique architectural style to the whole building.

The spacious stairs are designed to encourage occupants to use them rather than the elevators.

GREEN-OFFICE® RUEIL appears as a vector of well-being for the whole community and the pioneer of a new generation of generous bioclimatic buildings. Yet innovative, they tend to become the standard of buildings that ensure the well-being of employees who become responsible actors. They will soon adopt, in their private lives, the facilities they use and appreciate in their daily work.

The project is composed of two buildings (East and West) within the same architectural volume. Each building is technically independent and has its own access. Optimal lighting of the office spaces is obtained by creating on the north two patios.

Patios incorporate green terraces and mark the main entrances of the buildings. Their different position and orientation is also used to provide two separate addresses to the buildings. This also pushes back the building to create a respiration in the public space.

On the southern façade, at both ends, two curved patios were created on the 6 upper levels. Photovoltaic panels are implemented over the technical terrace on the roof. The project adopts a striking architectural design that will bring a new quality to the neighborhood, for it replaces an industrial area that occupied the site.

The shape of the building also creates protection against noices, a sound barrier between the railway tracks on the south, and offices, residential district, and a school on the North.

The project offers comfortable, bright and flexible workspaces that can be transformed quickly according to user needs. The shape of the building allows the deployment of office spaces between 12m and 21m large, with an area of 2,200m² on the West and about 2,350m² on the East. The core of the buildings has been minimized to save transparency and give a maximum of natural lighting to all workspaces. Each building is organized independently and has its own lobby and all the equipment necessary. Common areas include a RIE, a cafeteria, a scamble, a hairdressing salon, concierge, fitness center and a multipurpose room.

There are several types of façades:
Running façade from the 1st floor to the 6th floor:
‐ Curtain wall in anodized aluminium profiles with thermal breaks and double glazed, opaque section with an insulated outer face (20cm) behind an enameled sheet of glass and and inner face in painted steel.
‐ Openings of fume extraction and fireman access every 4 panels.
‐ External venetian blinds integrated in an anodized aluminium soundproof casing, blinds of 80 mm.
‐ Alongside each pillar is fixed a slide of screenprinted laminated glass , 35cm wide.

Communication Façade at the 3rd and 4th floors, R+3 et R+4, at the gables and return on 4 façade panels on the south :
‐ Double skin façade in anodized aluminium profiles with thermal breakers.

With the materials used for its construction (glass and metal), these façades are almost sef-cleaning, reducing the maintenance and cleaning cycles. They ensure a low aging rate.

Solar protections
All façades are equipped with mobile exterior solar protections (screenprinted laminated glass slides) and exteriror blinds (except for a few interior blinds).
These protections allow :
‐in summer the limitation of solar gains and the reduction of colling consumptions,
‐in winter the increase of solar gains.
Perfectly integrated in the design of the façades by the architect, the exterior blinds are optimised in their dimensions and their usage, after advanced dynamic thermal studies.

The site is located in the city of Rueil-Malmaison (near Paris), in an area formerly reserved for public railway services (SNCF and RATP) in a urban area. It was occupied by a network of secondary railways which were intended for the maintenance of trains, construction and use of maintenance equipment storage.The operation of public rail services now let the place for a real estate transaction offices.

This 10,494 m² land is located in a tertiary buildings zone near the business center of Paris-La Défense.

On the north-west lies the future soft traffic space dedicated to cyclists and pedestrians, currently occupied by a railway tracks.

This radiant system ensures great thermal comfort. Temperature regulation in the pipes will allow to keep the surface temperature of the slab constant during the year.

Coupled with the water table geothermal energy, the active slab system covers most of the heat and cold requirements of the Green Office® Rueil building.

Geothermal water cycle, hot water and cold water cycles in the active slab in offices, air cycle in offices, with all these technologies Green Office® Rueil is an optimal combination of natural processes for the comfort of its inoccupants and cost control. 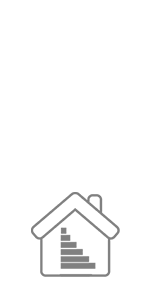