The Docks de Ris district is located in the town of Ris-Orangis in Essonne, about 20 km south of Paris. Ris-Orangis has a population of 27,535 and belongs to the Évry Center Essonne (CAECE) agglomeration community, which comprises six municipalities and 116,676 inhabitants (INSEE 2011). Located at the edge of natural and urban areas, Ris-Orangis is predominantly urban but has large green areas . Ris-Orangis is at the heart of one of the priority sites to boost the regional development strategy. The project is subject to the following objectives of the SDRIF (Master Plan of the Ile-de-France Region):

The Docks of Ris is a set of industrial wastelands, located in the sector called "bottom of the city" of Ris-Orangis. Composed of 1880s buildings emblematic of the city and a body of water in the heart of an afforestation, it is an exceptional space along the banks of the Seine a few minutes walk from the station. On this parcel, the city of Ris-Orangis chose to imagine a sustainable and innovative urbanism, and entrusted to the AFTRP the development of the site. The Apollonia Docks The historical reference of the old liquor docks is omnipresent in the design of the residence. Two elegant buildings adopt the industrial architecture of the old hall. Brick and wood facades reinforce this reference to the industrial past of the place.

In the eco-district of Val de Ris, on the former Alcohol Service, the Docks Apollonia, a 146-unit project, draws inspiration from the site's industrial past and enhances the volume of the old halls, creating a centrality on the neighborhood scale. Two sets of linear buildings with iconic forms frame a vast public green space whose light is filtered by shades. The materials are used for their physical, thermal and symbolic qualities.
Under-basement, the brick reminds the industrial past of the site. The concrete and monomur structure provides the necessary inertia. While the wooden facades resonate with the vegetation of the eco-district.
Only the use disrupts the rigor of the building and highlights the accesses, typologies and outdoor spaces of the housing, thus offering a comfort and a conviviality specific to the individual housing. Bioclimatic design The buildings of the operation have compactness and high density. This design of simple volumes, limiting by nature the losses allows to aim for high energy performance. Also the BBC label is, of course, achieved with a Cep level ≤ 65 kWhEP / m².year. In the dwellings, the glazed surfaces are generous allowing to benefit from an abundant natural light, limiting to the strict minimum the recourse to the artificial lighting. The orientation of these glass sets allows you to enjoy free solar benefits. In addition, architectural protections (balconies, caps) come to effectively protect the house from possible summer overheating. The bay windows are also equipped with shutters to protect themselves effectively from solar radiation.

The AFTRP appealed to Loïc Chesne to set up a method of environmental analysis at the neighborhood level.
It initially relied on the High Environmental Quality analyzes of buildings, to then produce a book of environmental requirements. (Environmental analyzes were not widespread in 2003, the Environmental Approach to Urban Planning did not exist in Ile-de-France.). At the end of the pre-operational phase, the initial objectives were refined. The AFTRP has prioritized among the HEQ Bâtiment targets, three priority objectives for the overall project: integration into the existing, energy management and water management. "All stakeholders project were invited in November 2009 to sign the Eco-neighborhood Charter, with the aim of formalizing everyone's commitment to a quality urban development approach.

In terms of the residents's involvement, open days with a list of grievances, thematic workshops, advanced communication allowed the project's stakeholders to meet the residents and future inhabitants, to inform them as much as possible in order to facilitate their adhesion to the project and gather their positions on certain points of the program. Workshops continue throughout the project to expand from late 2011 to the development of the entire Bas de Ris. 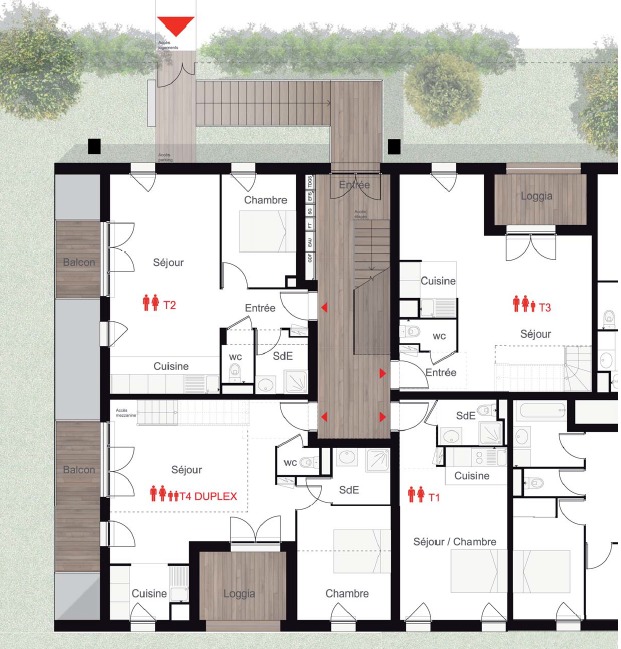 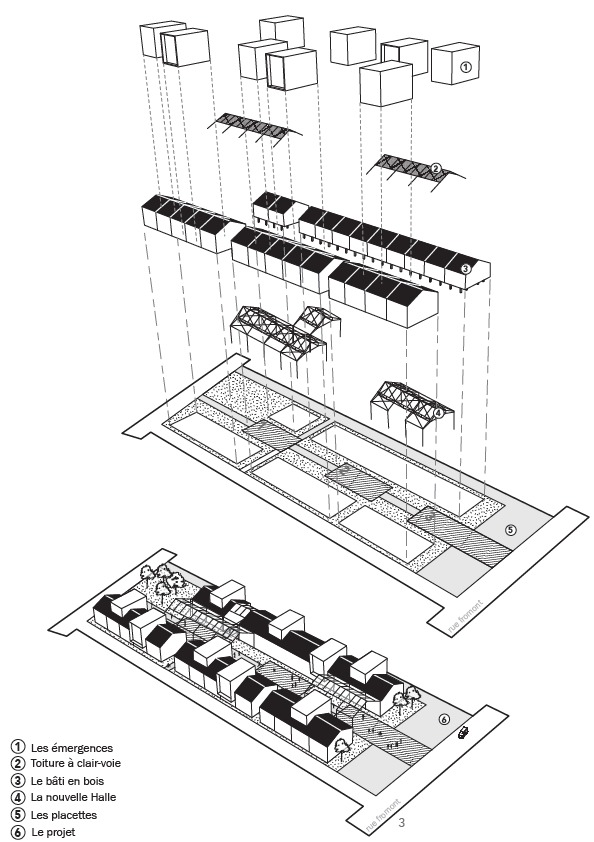 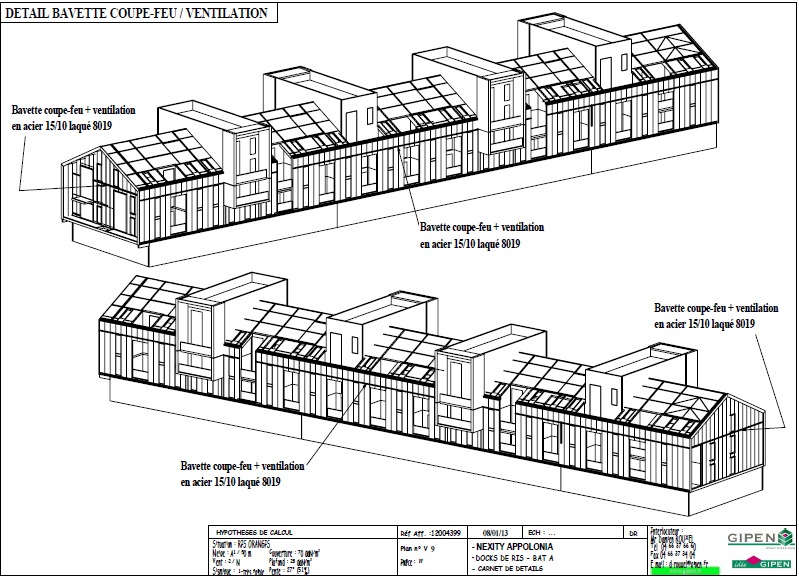 The project is made of floors and walls of concrete slabs on which framed facades and brown autoclaved douglas facade cling. The facade panels, prefabricated in the factory (frame, insulation, vapor barrier and clapboard), width 170 or 250 cm, are the height of the building. They are fixed on the slab of the first level and in front of the slab noses of the higher levels by squares and ankles. The use of this system makes it possible to combine the thermal efficiency of wood with the thermal inertia of concrete. The strong inertia provided by the roofs and the floors makes it possible to manage the summer overheating by clipping the maximum temperatures reached. High density insulation (>70kgs) is added at the slab / framing junction. The facades consist of a 43x129mm clear-lined façade cladding fixed on 27x38mm cleats, followed by a continuous rainshield, a 9mm OSB3 bracing board, and a wood frame structure made of 36x200mm spruce studs.
GR35 mineral wool 2x100mm insulation, continuous vapor barrier, 45mm additional insulation and two BA13 panels fixed on 48mm stil. The joineries are equipped with low emission double glazed with argon blade and have a Uw coefficient ≤ 1.50 W / m².K.

Located north of the commune of Ris-Orangis, the project is located at the entrance of town by the RD 31 and is bordered:

- to the south-west by suburban areas, beyond the street of Fromont which allows to join the center
of Ris-Orangis
- in the north, by the Seine and the RER D Ris-Orangis railway station whose track crosses the district
- in the west by a district of social housing Essonne Habitat
- to the east by the Playground The wooded area of ​​the lake, located in the perimeter of the ZAC and until        2010 closed to the public, has been returned to the agglomeration to be the subject of light layouts allowing its reappropriation by the inhabitants. Sensitive natural space, a light intervention was allowed under condition not to question the eco-system. The objective of the development project is to conserve or even increase its faunistic and floristic wealth, while opening it to the inhabitants and walkers. 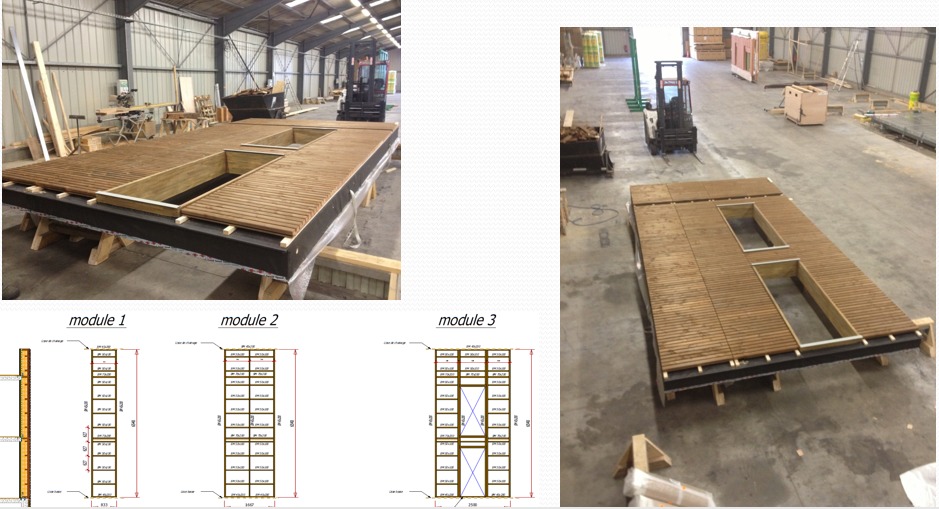 - 2 BA13 on stil 48mm with additional insulation45 mm Continuous vapor barrier
- Wood frame structure composed of 36x200 spruce uprights with 2x100mm mineral wool insulation GR35
- OSB3 9mm bracing board + continuous rain cover + 27x38 cleats and light aspect cladding 43x129 track in Douglas fir autoclave. Crosswise steel flap between each floor level
- The panels are entirely prefabricated at the factory (frame, vapor barrier insulation and clapboard installation). They are manufactured over the entire height and are positioned in support on the slab of the first level and in front of the slab noses of the other levels (placement of a high density insulation >70kgs at the slab junction frame)
- The panels of width 1.70 and 2.50 are assembled on the ground and at the junction of the slabs by brackets and ankles

The alternative management of rainwater is at the foundation of the composition and treatment of the public spaces of the eco-neighborhood, through the establishment of a network of recessed gardens that collects, stores, then infiltrates or discharges by overflow (depending on the importance of the rain event) clean runoff from private islets and public spaces.

Massive use in the construction of wood material (facade, facade structure, carpentry, joinery, ...) significantly reduces the carbon impact of the operation (CO2). Indeed, the carbon footprint of timber is almost zero. The CO2 emitted during the cultivation, transport and reanformation of the wood is offset by the amount of CO2 absorbed during the growth of the tree. The significant use of wood is therefore a simple way of storing CO2, the main cause of the increase in the greenhouse effect. In addition, the wood used will come primarily from European managed forests. Working with wood has created a project in harmony with its natural environment, taking advantage of the inherent qualities of this material.

A wood / concrete system has been put in place: the wood-frame and timber-framed facades, as well as a wood frame supporting the roof, are supported on concrete floors and walls. Each device has its function. The facades, prefabricated in the workshop, envelop the building, thus avoiding thermal bridges. The concrete structure offers good inertia to the building. Active slabs connected to the geothermal network set up on the scale of the ZAC, allow to heat and refresh the housing. In addition, the production of heat for heating and domestic hot water by electric heat pump also contributes to an extremely low carbon footprint.