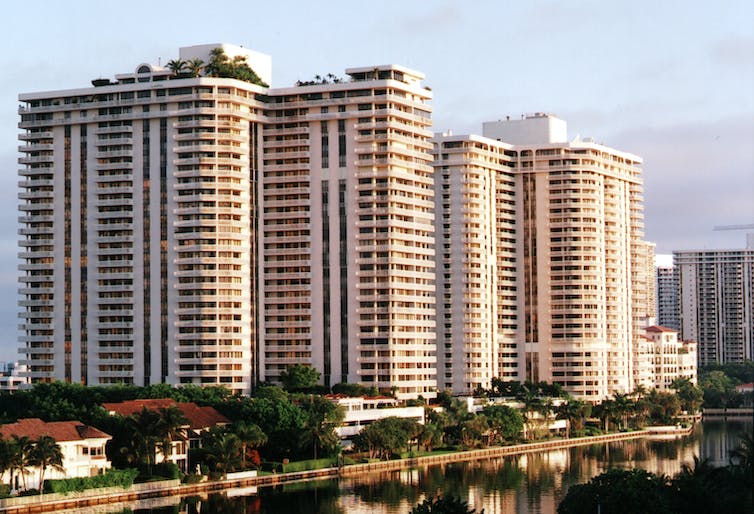 About 1 in 3 homeowners across the Miami region live in condos, many with waterfront views. Kelly Kagan, CC BY-ND, Matthew Gordon Lasner, Hunter College

The tragic collapse of Champlain Towers South in Surfside, Florida, on June 24, 2021, made millions of Americans focus for the first time on the risks of high-rise construction and oceanfront living. Many also became more aware of the pitfalls of condominiums and other forms of co-ownership in which each unit in a multifamily building or other kind of housing complex is individually owned, while the structure itself is owned, and managed, collectively.

As I explain in my book “High Life,” however, there are many benefits to co-ownership. People who buy condos can more easily afford choice locations, have less maintenance to deal with and get the freedom to remodel. Those advantages have made this kind of lifestyle popular for more than a century.

As U.S. cities grew dramatically in the 19th century, many of the people moving into urban areas clustered together in new kinds of housing. Low-income Americans moved into tenements, the middle class resided in boarding houses and residential hotels, and the prosperous inhabited apartments.

Many Americans, though, were squeamish about sharing a building with other families, especially if their neighbors would be temporary. There were also complaints about sky-high rents. By the 1880s, about a decade after the first apartment buildings went up, the co-ownership model emerged in U.S. cities.

Buying rather than renting an apartment, owners believed, transformed a relatively public space into a more private home and helped strengthen a community of neighbors. It also allowed many people to own homes in places they otherwise couldn’t afford to.

Initially, most co-owned buildings were in popular areas, including Manhattan’s Upper East Side, Chicago’s lakefront, San Francisco’s Nob Hill and the area around Rock Creek Park in Washington.

After World War II, more Americans moved to Florida and other warm-weather resort areas, either permanently or for regular stints. These newcomers and visitors often sought beachfront views. 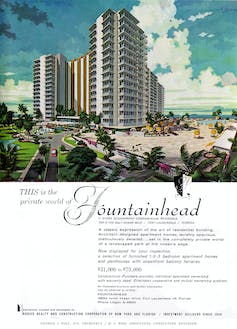 This 1964 ad in Florida Architecture touted ‘the private world’ of the Fountainhead condo in Ft. Lauderdale. Matthew Gordon Lasner

Affordability is part of the appeal

Not only does co-ownership allow people to share housing in convenient or beautiful locations, it usually keeps their home-related expenses down.

Part of the savings comes from sharing land. Many families can live on a lot that might otherwise have fit just a few houses. Paying for services as a group saves money, too. It’s cheaper to share boilers, roofs, doormen and janitors than to pay for all that on your own. Apartment owners can also share the expense of amenities like gyms and swimming pools.

Further savings come from the fact that buildings aren’t owned by landlords but by their residents. And those people do much of the management themselves. In co-owned buildings, walls, roofs, parking lots and other common elements technically belong to a special kind of nonprofit, usually a condominium association, run by an elected board of tenant directors who volunteer their time.

This kind of housing also typically keeps costs stable because renters are more vulnerable to inflation and other shifts in the housing market – with some exceptions.

These and other savings help explain why apartment ownership has always appealed to Americans living on fixed incomes, such as retirees.

This is especially true of those with enough cash to buy their apartments without a mortgage. Retirees selling houses up north – often originally bought with the help of the government through the Federal Housing Administration or GI Bill – moved into Florida condos by the hundreds of thousands between the 1960s and 1980s. 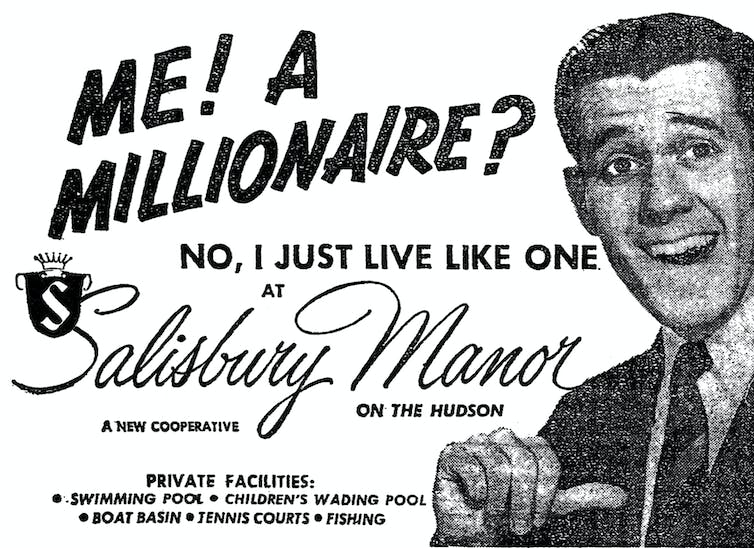 This ad in the Sept. 21, 1958, edition of The New York Times emphasized the fancy amenities at the Salisbury Manor co-op along the Hudson River in Nyack. Matthew Gordon Lasner

Fostering a sense of community

There’s no guarantee you will like your neighbors, and plenty of condo buildings are susceptible to squabbling and the financial limitations of owners. But this kind of ownership brings people together, however begrudgingly.

Most owners had much in common in the earliest co-owned buildings in many parts of the country, including New York, Washington and South Florida. Many were women who, at a time when it was considered risqué for them to live on their own, found that the arrangement made them feel safer.

As developers started putting up larger buildings full of unrelated buyers, they began to screen prospective residents by requiring personal references. Often that meant keeping out people who belonged to racial, ethnic and religious minorities – including Jews, Catholics, and African Americans. 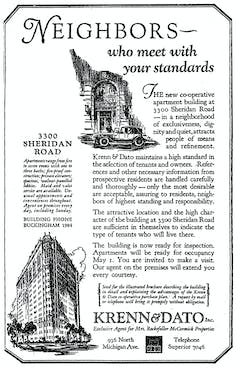 This Feb. 24, 1927, ad in the Chicago Tribune for a co-owned building noted that residency would be limited to ‘people of means and refinement.’ Matthew Gordon Lasner

The elected boards of directors at some expensive buildings in New York still screen buyers in this way. To date, their owners have largely been shielded from the Fair Housing Act of 1968 by claims that they have other reasons, usually financial, for rejecting applicants.

By the 1960s, however, as demand for co-ownership exploded – and segregation came under attack in all arenas of American life – developers realized that Americans didn’t need this kind of prejudiced crutch to come together and manage an apartment building. So they did away with the practice.

With more and more Americans living alone, co-ownership’s blend of privacy and community is more important than ever.

Condos of all kinds, everywhere

It’s currently possible to buy a condo just about anywhere, including in underground bunkers or trailer parks. You can occupy a condo that’s a single-family detached house without having to deal with your own yard. Some 30 million Americans live in co-owned homes, including 1 in 5 homeowners in metropolitan areas.

The deadly collapse of Champlain Towers South is a reminder that these complexes can be more fragile than they appear. And even if the vast majority of condo buildings aren’t structurally dangerous, many don’t have enough money set aside for major repairs.

Owners and board members up and down the Florida coast and around the country are now reviewing their buildings’ financial and engineering reports, and lawmakers are calling for increased governmental oversight.

But this is also an opportunity to take stock of what I consider a remarkable achievement: a system that allows millions of people who don’t want or need whole houses, or who can’t afford them, to live in dignity – or even luxury – in apartments of their own.

[Get the best of The Conversation, every weekend. Sign up for our weekly newsletter.]