Waste materials to be tested as viable options for insulating buildings 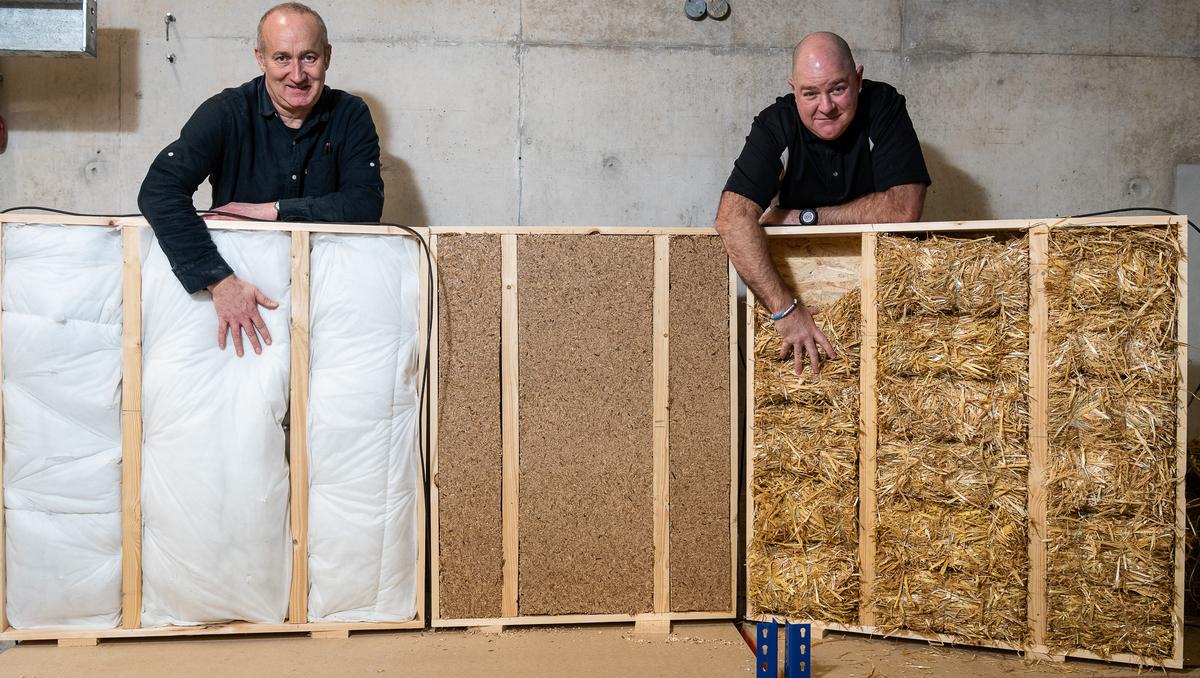 The University of Bath is testing a number of waste materials to assess their thermal performance as potential materials for insulating buildings.

This collaborative project between the University of Bath, University of Brighton, UniLaSalle in Rouen (France) and five other academic and non-academic partners, designed and led by Nomadeis, and funded under the Interreg VA France (Channel) England programme, is investigating the performance of a range of waste materials and bio-based co-products as alternative building insulation materials. (Communication ensured by Construction21 and ASBP).

The research team at the University of Bath is testing and comparing the thermal performance of each of the insulation materials by constructing three identical prototype wall panels, each containing one of the materials. Their performances will be compared and contrasted with each other as well as against industry standard insulation used currently in most buildings.

The UK Government has set the UK construction industry the aim of halving its greenhouse gas emissions by 2025, favouring the introduction of technologies capable of building energy-efficient, cost-effective housing and infrastructure.

It is hoped that by using already existing waste materials or co-products, widespread use of such materials in the construction sector could lead to significant reductions in emissions associated with construction as well as reducing the dependency on natural resources used in traditional insulation such as glass wool and rock wool.

The panels are 150mm thick by 1.1 metre square and fitted with 9mm plywood either side, similar of how insulation is commonly constructed into buildings. Each panel contains a number of probes measuring relative humidity, interior and exterior temperature, and heat flux.

The panels will undergo six weeks of consecutive rigorous testing in a state-of-the-art environmental chamber at the University’s Building Research Park. There will be two tests – a steady state and a non-steady state temperature test.

Research Associate in the University of Bath’s Department of Architecture & Civil Engineering, Dr Shawn Platt, said: "This is the first time these materials will have been tested in such a robust scientific way allowing us to accurately assess their thermal performance against each other as well as against industry standard insulation.
It is important we continue to play our part in reducing greenhouse gas emissions and the potential to use waste and co-products as potential future alternatives for building insulation, which could significantly help the construction sector become more sustainable and environmentally friendly."

Professor of Innovative Construction Materials at the University of Bath, Pete Walker, commented: "Our previous research has shown the performance of straw bales as a sustainable and energy efficient building material, however, there are a number of other waste and co-products which could also perform well as construction materials.
The opportunity to exploit these waste and agricultural co-products is not something that should be ignored and we are hopeful that if their thermal performance is comparable or better than current insulation, industry will think seriously about using the materials in future construction."

The three materials being tested are either bio-based co-products (wheat straw and corn pith panel) or waste (duvets).

In the UK up to 7 million tonnes of straw remains after the production of wheat flour, and up to half this amount is effectively discarded due to its low value, to be used as animal bedding. It is estimated this ‘leftover’ 3.8 million tonnes of straw could be used to build over 500,000 new homes, solving the UK housing shortage within five years

Similar to wheat straw, the performance of straw bales as an energy efficient and sustainable building material has already been proven. In 2015, the first straw eco homes went on sale in Bristol as a result of University of Bath research.

Duvets are an industrial waste product and it is estimated 61,900 tonnes of duvets and pillows enter the waste stream each year, especially from hospitals where they are either buried in landfill or simply burned. Also, manufacturing goods such as polyester duvets requires energy and releases greenhouses gases.

Corn pith is the internal part of the corn stalks. The corn stalk is currently underused in maize grain crops (50% returned to soil). This agricultural byproduct presents a very high potential of valorization for agromaterials. The total estimated potential maize pith resource is 420,000 tonnes a year in the INTERREG program area.

The University of Bath researchers hope that from completing these rigorous tests, they will be able to identify which of the materials are a viable waste material for use in insulating buildings with a view to commercialising this in the future.

Professor Pete Walker (left) and Dr Shawn Platt (right) from the University are Bath are testing a number of waste materials to assess their thermal performance as potential materials for insulating buildings.

Other news in "Research and Development"

Seven European cities pilot solutions to be more circular on construction and demolition, and organic waste

Høje-Taastrup and Roskilde (Denmark), Mikkeli (Finland), Apeldoorn (the Netherlands), Bodø (Norway), Porto (Portugal) and Seville (Spain) are the seven European cities that will pilot a series of demonstration actions on construction (...)

The H2020 project ExcEED and its geo-clustering tool: Mapping and improving the energy efficiency of buildings

The EU-funded project ExcEED publishes a new factsheet on its geoclustering tool, one of the central tool of the project platform. The ExcEED platform provides different tools featuring building performance in operational conditions (...)

NEW: Ecological loopback, or the benefits of a DHW loopback without the disadvantages

1. Hot water is made available as fast as or faster than with a conventional DHW circulation. 2. Direct hot water only to the faucet that has requested it. 3. No water wastage, you can enter the shower before opening the tap. 4. No (...)