The future of renewable infrastructure is uncertain without good planning

In 2005, a small hydropower plant was installed in the Sukajaya district of West Java, Indonesia. This was an off-the-grid project, owned by the community, that provided electricity locally through a mini-grid to about 150 households mainly for lighting. But after 10 years the plant was discontinued when the community was connected to the recently expanded central grid.

This is the story for many such projects in the region, including solar-powered residential systems. Over and over again, the value of renewable energy investments is lost as the installations are left abandoned as the grid arrives. In Indonesia alone, more than 150 villages have abandoned mini-grid projects since late 2000s.

While investing in fossil fuel-based energy has become riskier, there are also unique investment risks with small-scale renewable systems. In developing countries, in many sites relying on off-grid or mini-grid electricity, this infrastructure faces the risk of becoming a “stranded asset” — abandoned infrastructure that no longer holds value — which may work against efforts to limit climate change.

This is a significant issue for the 1.1 billion people that still do not have access to any electricity globally. According to the International Energy Agency, to achieve 100 per cent electrification by 2030, we need to rely heavily on solutions that do not depend on a central electrical grid. In highly unelectrified regions like sub-Saharan Africa, nearly three-quarters of the new connections must come from off-grid and mini-grid systems.

Traditionally, the dominant approach to electrifying regions without electricity has been to extend the centralized grid into those regions. Most of these grids are run on fossil fuels such as coal, which still remains the dominant electricity fuel source globally. 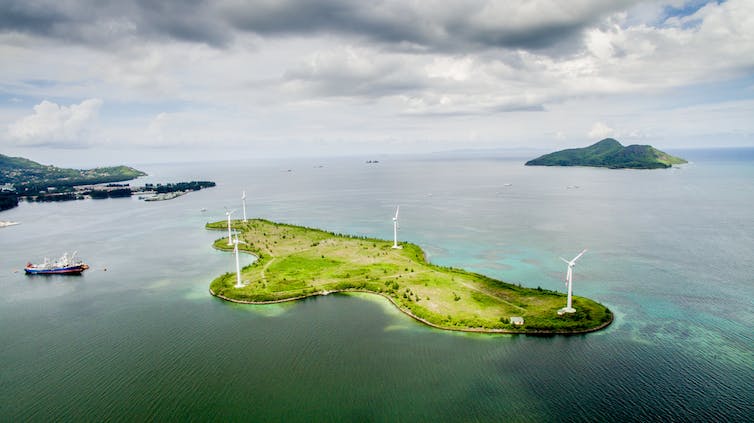 A wind farm in the Seychelles. IRENA/flickr, CC BY-NC-ND

However, in recent decades, off-grid technologies based on renewable energy such as solar photovoltaics, wind power or hydropower have received a lot of attention for their ability to easily electrify remote communities. This has happened in the form of mini-grids, smaller versions of a large transmission grid, that connect tens or hundreds of households, or off-grid standalone systems for a single or a few households.

But mini-grid and off-grid developments are threatened by the arrival of the main grid, because customers will readily defect to the main grid. This compromises the expectations of the mini-grid developers and sellers of standalone systems.

A study of mini-grids in three developing countries in Asia shows that this phenomenon is widespread. In another study, one mini-grid investor in India noted that the government did not give him:

“…the assurance that if you do these projects is the grid going to reach there in one year, three years, five years? So there is no solidity in all of that.”

In fact, in a recent report by the UN Development Program (UNDP), grid expansion has been identified as one of the key barriers facing off-grid and mini-grid development.

There are two options for developers to partially save their assets, when the grid arrives.

Off-grid and mini-grid developers can partially protect their investments by letting go of the electricity generation related assets — like the power plant or generator, but keep the distribution power lines in place.

In Cambodia, for example, which had mainly diesel-based mini-grid systems, when the main electrical grid was expanded, larger mini-grids were integrated into it. This allowed the mini-grid developers to change their business model and become small-scale power distributors. Unfortunately, this approach often eliminates the clean-energy benefits that come from mini-grids running on renewable energy. 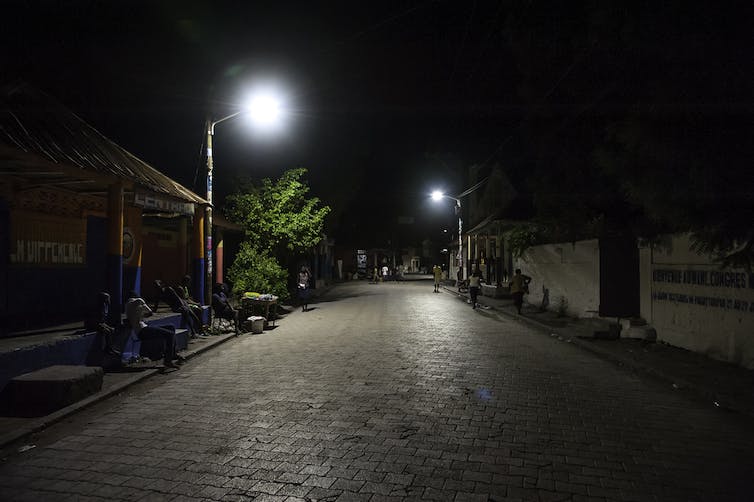 In September 2015, the town of Les Côteaux in the south of Haiti switched on its lights for the first time after a mini-grid was installed. UNEP/Marc Lee Steed

Another option is to abandon the distribution network and use the generation system to feed power back to the main grid. For example, in Sri Lanka, three hydropower projects became small-scale power producers. These are low success rates, however, and an NGO had to do significant work to convert the three projects.

But these courses of action cannot happen in the absence of appropriate regulations. Competition from a future centralized grid can be avoided through integrated planning for electrification.

Both grid and decentralized systems (off-grid and mini-grid) can be used together successfully if governments work towards the twin imperatives of universal electricity access and emissions reductions. By creating off-grid zones and non-overlapping service areas, they can reduce the investment risk for decentralized solutions. They can then focus on enhancing the operation and maintenance capacity of local systems.

Decentralized energy has been hailed in many developed countries as the harbinger of democratization of energy. But the picture is very different in developing countries.

Electrification using conventional means, growing consumption levels and simultaneous reliance on decentralized solutions without planning, may mean many small-scale low-carbon projects get discarded, and leave consumers, investors and governments in a fix.

Since deploying renewables is considered one of the most important ways to mitigate the climate change crisis, understanding their vulnerability and mitigating these vulnerabilities are indispensable for any bold climate action.

Photo : These photovoltaics panels provide this village with energy now, but they could become obsolete when the main grid arrives. (Shutterstock)