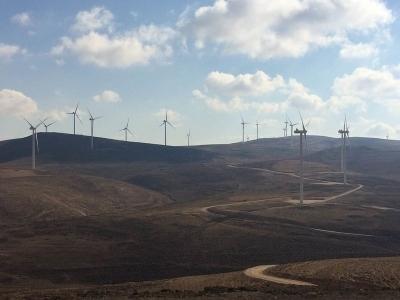 The Kingdom of Saudi Arabia has opened up bidding on a new $500 million wind farm in the desert.

The 400 megawatt site, located near the border with Jordan, will be the country’s first utility-sized wind farm; its first ever turbine was constructed in 2017.

Four bids to operate the planned wind farm were received by the Renewable Energy Project Development Office (REPDO) on Monday. The lowest bid came in $21.30 per megawatt hour, placed by a joint venture between EDF and Masdar. Other bids ranged between $23 and $33 from a range of international companies, including Enel, Engie, and Martifer Renewables.

However, a statement from the Ministry of Energy, Industry and Mineral Resources made clear that the results do not “constitute a determination by REPDO of the outcome of the bidding process".

This means the lowest bid hasn’t necessarily won and developers still have to show their compliance with the requirements of the project.

"The Kingdom’s first utility-scale wind project opens a new chapter in our journey towards a diversified energy mix,” said energy minister Khalid Al Falih, according to a statement seen by Windpower Monthly.

"The $500 million Dumat Al Jandal wind farm in the northern Al Jouf region will generate enough power to supply up to 70,000 Saudi households as it connects to the northern electricity grid," he added.

The bid forms part of Saudi Arabia’s push to develop 9,000 megawatts of new renewable energy capacity by 2023. The plan is estimated to cost the Kingdom around $50 billion. Earlier this year, it signed a Memorandum of Understanding with Japan’s SoftBank to build upwards of 200 gigawatts of solar power in the country. The first stage of which will comprise 7,200 megawatts.