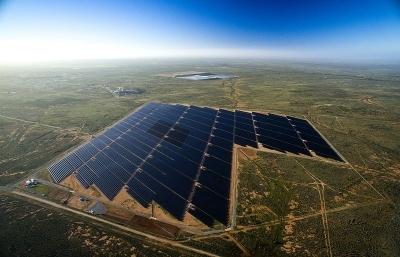 Planning approval has been granted to a new solar farm set to become Australia’s largest to date.

The Rodds Bay project will be located near the coast in Queensland and have a capacity of 300 megawatts (MW). This is enough to power around 88,000 households, according to energy developers Renew Estate.

Construction will take place later this year and it is expected to be up and running by the start of 2020.

Director Simon Currie said the Australian-based company is “committed to delivering tangible, meaningful and enduring benefits to the people, the businesses and the communities who are our neighbours.”

The site’s location, around 50 kilometres south of the coastal town of Gladstone, is intended to bolster the state’s role as a leader in renewable energy. Gladstone, a city of around 30,000 people, is also being touted as a potential energy capital within Queensland.

“At its peak, a solar farm of this size requires about 300 workers on site. We will collaborate with local training organisations to ensure local job-seekers have the skills needed to construct and operate a solar farm, and we will prioritise the employment of locals in enduring roles once the project is operational,” he added.

Wirsol Energy, one of financial backers behind Rodds Bay, has over 200 megawatts in development in Queensland. Managing Director, Mark Hogan, commented that the project would help the company reach a target of 1 gigawatts of capacity in the country.

Australia is starting to capitalise on its plentiful solar resources; in 2017, a record 3.5 million solar panels were installed across the country, a 41 percent increase on the previous year.

Its total solar capacity now sits at around 7,800 megawatts, placing it in the top 10 for global installations.

“This is an exciting time for the solar industry in Australia,” Hogan added.