Beyond the Paris Agreement, the fight against climate change is also taking place on the field. That’s why, Construction21 accelerates the dissemination of innovation through this international competition of exemplary buildings and eco-districts. The 2015 winners were announced in Le Bourget during the COP21, at the Buildings Day of the Global Alliance for Buildings and Construction. You will discover this year’s winners during the COP22 in Marrakesh!

Enter the competition to inspire professionals all around the world!

The contest brings real solutions already implemented in existing buildings, and that could be replicated in other places. Beyond the 10 countries covered by Construction21 today, two new organizing countries join the competition: The United States and Colombia. Moreover, the international platform Construction21 will show delivered projects from all over the world. Buildings from China, Scandinavia and Brazil are already announced for 2016, and a "Energy & Hot Climates" category will highlight efficient buildings in tropical and arid environments.

A second competition, dedicated to cities, based on the City21 observatory

Another new feature in 2016 : the competition expands to cities. In December 2015, Construction21 launched a new database describing sustainable urban districts and solutions: City21. A benchmark of 20 eco-districts is already online. Candidates for the Green City Solutions Awards 2016 will enrich the City21 observatory with dozens of additional urban projects, each highlighting sustainable solutions for mobility, energy, resource management, biodiversity, economic development or smart city.

The contest, through the great diffusion power of Construction21 and their partners, will showcase these exemplary buildings and urban projects for 1 million professionals to see over the year 2016. All competing buildings will be visible in 2016 and long after on all Construction21 platforms, in each local language.

Independent experts will select the best projects either internationally and in each country. At the same time, field professionals will also elect their favourite realizations through an online vote, again national and international.

Each winning building and urban project will be rewarded with its own video, created by the Construction21 team to present their solutions. These videos will be widely disseminated on the web. Nominees and winners will also be honored especially during the awards ceremony to be held in Marrakesh in November, during the COP22. 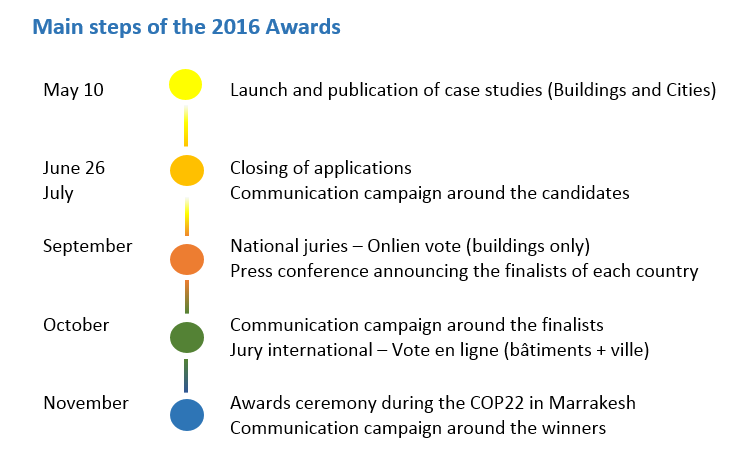 The Covenant of Mayors Investment Forum ended its second day on 19 March on a high note as a record of more than 600 participants awaited the launch of the EU City Facility (EUCF). The EUCF will support local authorities and groupings (...)