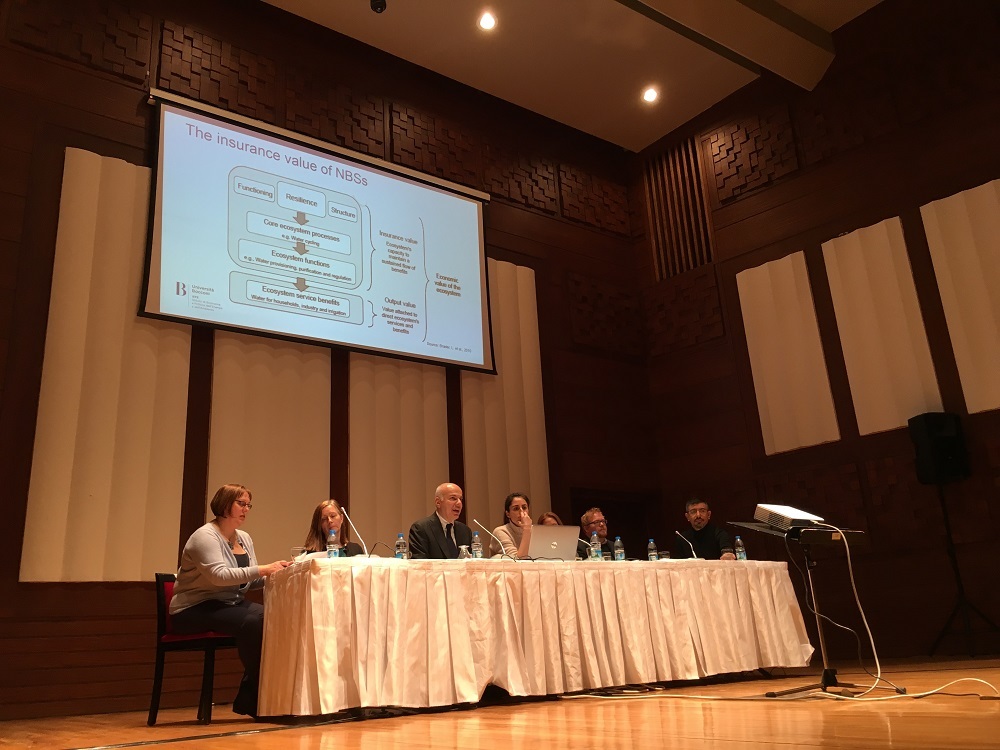 A total number of 150 attendees coming from the local and national academia, municipalities, professional chambers, NGOs and the ministries attended the workshop. It was an avenue for them to listen to international experts’ experience on developing green infrastructures in various cities.

During the first part of the workshop, a series of talks were made by URBAN GreenUP’s experts from the academia. They made use of theoretical frameworks coupled with several case studies – a holistic and systematic approach, which suggests that implementing nature-based solutions to cities definitely makes sense in theory and in practice.

Edoardo Croci and Benedetta Lucchitta from the Centre for Research on Energy and Environmental Economics and Policy of the Bocconi University presented the efficiency of nature in fighting climate change and improving the well-being of the community. They delivered across the public the message of how important it is for cities to realize and invest on the potential of nature in providing substantial social, economic and environmental benefits for the city and for its citizens.

Speaking of investment, Dr Ian Mell, lecturer in Environmental and Landscape Planning from the University of Manchester, concurred by pointing out the value of investment in green infrastructure at the community scale. He argued that planners and designers should focus on integrating people, places and projects in developing plans to create multi-functional urban spaces, which support nature-based solutions and encourage individuals and communities to interact and engage with the landscape. With this mind set, he encouraged the attendees to develop green infrastructures as a way to create more sustainable, energetic and resilient places.

A talk was given by Sarah Clement, lecturer from the University of Liverpool, stressing the importance of good governance for such solutions to work. She did so by presenting case study examples of how governance reform can influence greatly the policies and plans on re-naturing cities.

Apart from the inputs provided by the academia, more case studies were provided by URBAN GreenUP’s partners from Liverpool, one of the front-runner cities of the project. Juliet Staples from Liverpool City Council and Clare Olver from The Mersey Forest presented on the Green Infrastructure Strategy for Liverpool, which was launched in May 2011.  The presentation covered the journey from the introduction of the term “Green Infrastructure”, the approach that was used and then the outcomes from this work. Among these, the joint working between Liverpool City Council and the health sector in the development of policies that support improved public health through the planning of green infrastructure.

All in all, the workshop turned out to be an accomplishment as people from different sectors listened and transferred their knowledge on nature-based solutions and policy making with ease. We hope that by the end of this project, the Green Infrastructure Roadmaps put together by the front-runner cities of Urban GreenUP will become one of the models other cities can look up to in creating a greener future for their people and the planet.