Four visions for the future of public transport 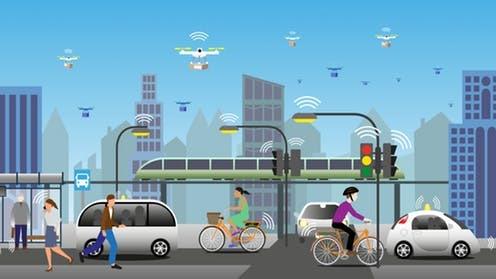 The way people get around is starting to change, and as a professor of transport strategy I do rather wonder if the modes of transport we use today will still be around by the turn of the next century.

Growing up, my favourite book was a children’s encyclopaedia first published in 1953. One double page spread featured an annotated cityscape, showing all aspects of the built environment – most of which we would still be familiar with now. The various modes of transport illustrated – trains, buses, lorries, taxis, motorcycles, bikes, pedestrians and private cars – still work together as a system in fundamentally the same ways.

But a whole range of possible (though not inevitable) societal and technological changes could revolutionise how we travel in the coming decades. These include large-scale responses to the climate change agenda and energy sourcing and security; shifting demographic trends (such as growing numbers of elderly people); the development of the collaborative economy; the growing use of big data; and the apparent inevitability of driverless cars.

To examine what future urban transport systems might look like, I recently directed a future-gazing project for New Zealand’s Ministry of Transport exploring how people might be travelling in the year 2045. I helped develop four scenarios, along two axes of change.

The first axis considered automation – at one end, vehicles are still be driven much like today (partial automation). At the other, they’re driverless (full automation). The second axis related to how dense cities could become – one future where the population is more dispersed (like Los Angeles) and another where it is concentrated at a higher density (more like Hong Kong). With these axes in mind, I generated four possible futures for public transport, which could play out in cities across the world. 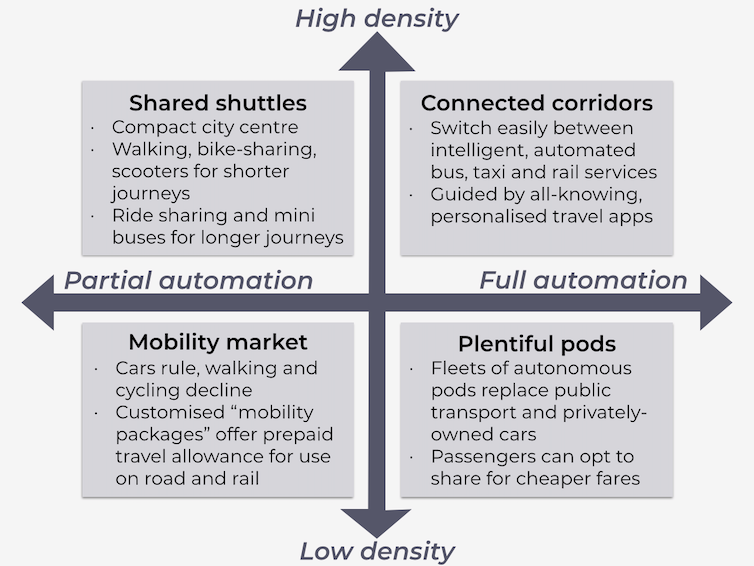 In the “shared shuttle” city, demand responsive minibuses, Uber-style taxis and micro-modes – such as shared bicycles, electric bikes and hoverboards – to cover the “last mile” to your destination are widespread. Hiring these different forms of transport is simple, thanks to seamless booking and payment systems and a thriving entrepreneurial spirit among a range of commercial, social and government transport providers. Meanwhile, new environmental regulations mean that owning a car is more expensive than it used to be, and private vehicles are restricted to the suburbs. 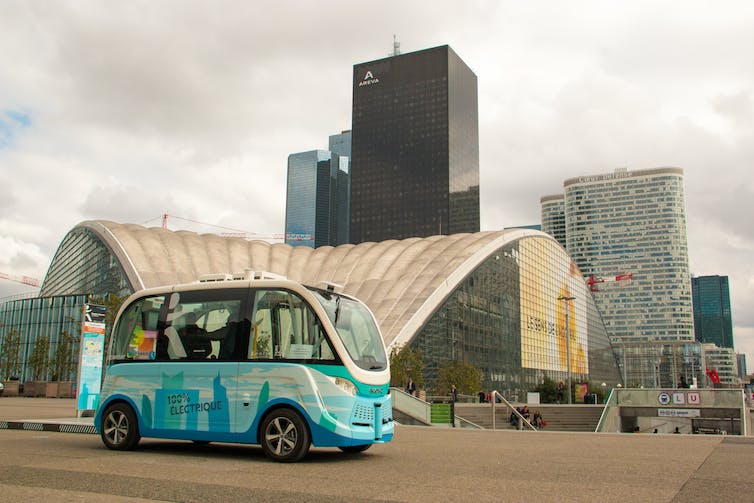 Flexibility is a core feature of this scenario, with vehicles and services that adjust to the needs of individuals, and with how the space continually adapts to meet the needs of the city as a whole. There’s also a collaborative ethos, reinforced by the development of a more compact and high-density city, while progress toward full automation has been slow because of safety and privacy concerns.

Private cars still dominate urban transport in the mobility market scenario. Many citizens live and often work in dispersed, low-density suburban areas, since city-centre housing became too expensive for most to afford. Fewer people walk and cycle, because of the long distances involved. And the use of public transport has declined, since less dense transport networks mean there are fewer viable routes, though a limited network of automated trains and buses is still used for trips to the city centre.

Car use has fallen somewhat since the 2010s, because “active management” measures – such as pre-bookable fast lanes and tolls – are now necessary to control congestion, despite the completion of a sizeable road building programme in the recent past. 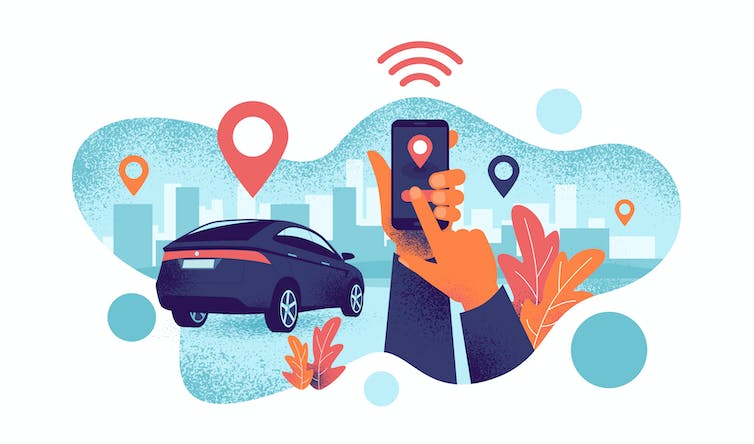 Instead, commercially provided pre-paid personalised “mobility packages” are helping to stimulate the use of a whole range of shared mobility options, such as car-pooling, bike hire and air taxi schemes. These now account for around a quarter of all journeys.

Society in this high-tech, highly urbanised world of connected corridors is characterised by perceptive but obedient citizens who trade access to their personal data in return for being able to use an extremely efficient transport system. Physically switching between different services or even different modes of travel is hassle free, thanks to well designed interchange points, and fully integrated timetabling, ticketing and information systems.

For instance, travellers might walk, e-cycle or take a demand-responsive minibus to a main route interchange, then board a high frequency rail service to get across town and finally take a shared autonomous taxi to their destination. Each will be guided by a personalised, all-knowing “travel ambassador” app on their smartphone or embedded chip, which will minimise overall travel times or maybe maximise sightseeing opportunities, according to their preferences.

In this future, fleets of variously-sized driverless pods now provide around three-quarters of those journeys that still need to be taken across the low-density, high-tech city. These pods having largely replaced most existing public transport services, and the vast majority of privately-owned cars.

People do still walk or cycle for some shorter trips. But pods are so convenient, providing affordable point-to-point journeys for those not satisfied by virtual interactions. Passengers can pay even less, if they agree to share with others. Pods are also fully connected to the internet, and are priced and tailored to meet customer needs. Ultimately, pods give people the freedom to work, learn or live where the weather is best or the houses are cheapest.

My research did not pass judgement as to which scenario should be pursued. But it did conclude that public transport will need to evolve to meet future challenges, and that the role of government will still be of key importance going forward, no matter which path is chosen. Personally though, if forced to choose, I think I’d favour a shared shuttle future more than the others - it just seems more sociable.

Marcus Enoch was employed part-time as a Strategy Director for the duration of the PT2045 project by the New Zealand Ministry of Transport, and this article draws on data and insights gathered and derived during that period.

The D2Grids project, which can be seen as a technico-economic project at first glance, is designed with a multi-dimensional approach in which various perspectives from the technical sciences and the human and social sciences converge (...)