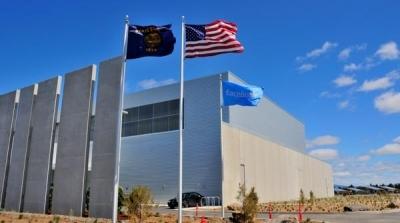 Facebook has signed a new deal to ensure one of its main data centers uses 100 percent clean energy.

The data center in the small town of Prineville, Oregon has been operational for the past seven years, and was Facebook’s first one. It is already equipped with energy efficiency measures, rainwater reclamation and contains a solar installation.

Its new partnership with Pacific Power will support the development of 437 megawatts of new solar power, including 100 megawatts directly in the Prineville area.

The news was announced at an event in Prineville this week, attended by the city’s mayor and Oregon’s Governor Kate Brown. Ms Brown said the project demonstrates that “Oregon is ready for the clean energy economy of the future.”

Facebook’s presence in the region has been a boon to economic growth, leading to a decline in unemployment and investment in public services, such as schools, parks and roads, according to the city’s mayor.

“We are expanding from our timber roots to a future with greater business diversity and a workforce with broader skills,” said Mayor Betty Jean Roppe.

Since 2013, the tech giant has made a commitment to ensure all its new data centers are designed and built with the highest sustainability standards in mind; this includes ensuring they are only powered by renewables.

“Our work with Pacific Power to develop new solar resources represents a significant milestone for our hyper-efficient Prineville Data Center. We are committed to supporting 100 percent renewable energy, and we are thrilled to have found a solution for our first data center,” said Peter Freed, Facebook’s energy strategy manager. “We are proud to be a part of the Prineville community, and look forward to a continued partnership with the city and the state of Oregon.”