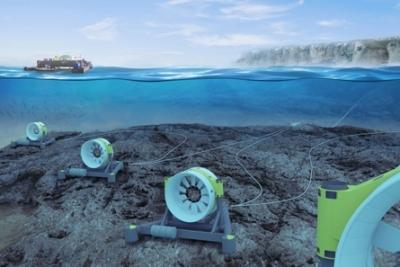 The European Commission has given the go ahead to build an innovative tidal energy project off the coast of Normandy.

The pilot clean energy plant will have a maximum capacity of 14 megawatts and comprise of seven underwater turbines, 16 metres wide, placed on the sea floor.

The EU called in the project to rule on whether it violated competition rules as the French Government is intending to provide investment and subsidy support. Some reports have suggested it will cost 112 million euros, of which nearly half will be provided by the state.

In its ruling, the Commission found that the technology “promotes market penetration” and that the level of aid “is proportionate and will not lead to overcompensation.”

France is hoping to corner the market in the burgeoning technology which has the potential to provide large quantities of renewable electricity and create major economic benefits.

It is currently in competition with the UK to commercialise tidal technology with a number of developers trialling projects around the North Sea and in the English Channel. A recent report found the new tidal market could contribute 1.4 billion to the UK by 2030, and create 4,000 jobs. However, the UK Government has backed away from supporting the technology citing cost concerns.

European Commissioner Margrethe Vestager, who controls competition policy, commented: "Tidal energy is one of the technologies that can contribute in the transition towards a climate friendly energy supply in Europe. The French project approved today will help showcase tidal energy technology, while limiting distortions of competition"

The new plant will be built by Dublin-based OpenHydro and operated by state-owned energy company EDF.