[D2Grids] From coal mining to heat mining: innovative heat and cold supply of industrial and commercial land in Bochum

After coal had been mined near the surface in Bochum-Laer since the 18th century, the "Dannenbaum" coal mine was built there in 1859. Dannenbaum was one of over 150 mines in the Ruhr area, the largest conurbation in Germany. Until 1958, the mine was operated for almost 100 years and at times reached an annual production of over 700,000 tons. In eight levels, depths of over 800 m were reached.

With the decline in coal production in the Ruhr area, the first changes began on the site. The colliery was closed, but in 1962 Adam Opel AG opened an automobile factory on the former colliery site and produced - at times with more than 20,000 employees - up to 360,000 cars a year. This era also ended in Bochum in 2014 and Opel closed its location.

Bochum and the region were now faced with the question of how to deal with the location and the area that had been shaped by industry for over 200 years. On the one hand, there was a recognition of the opportunity associated with an innovative and sustainable use of the site; on the other hand, great efforts would be required to prepare the site in such a way that new uses become possible.

The city of Bochum and Opel founded a joint company - Bochum Perspektive 2022 GmbH - to prepare the entire site of around 70 hectares in such a way that it can continue to be used as an industrial and commercial location. MARK 51°7 is the title under which the former brownfield site is marketed. The objectives of the cooperation between the city and the former owner Opel are the preparation of the area and demolition of the old buildings, the development of the necessary infrastructure, the creation of a concept for the use of the area & settlement and finally the marketing of the areas. Around 130 million euros - of which around 65 million euros are state subsidies - were and are necessary to achieve this goal. By 2022, 45 ha of the area should have been marketed, a further 23 ha will be developed as open spaces and green spaces. 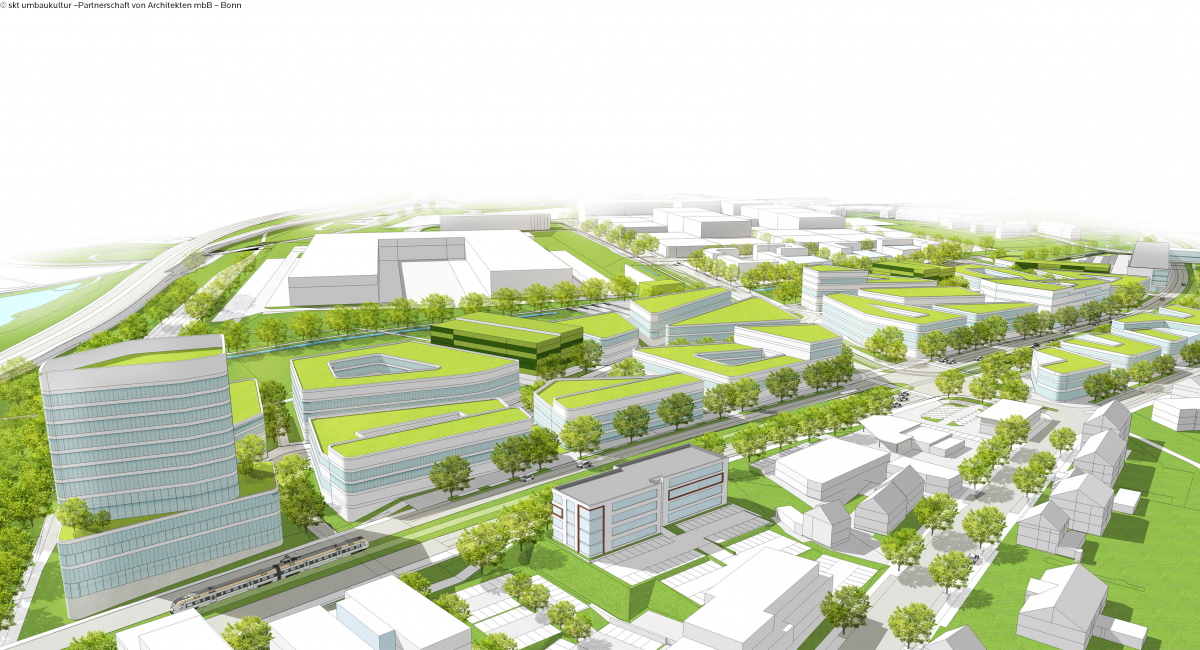 Concept for future use and development

Guiding idea for the settlement of new companies has always been to be able to offer innovative and sustainable jobs for young academics from Bochum and the Ruhr area. If further work continues as successfully as before, 6,000 people will already be producing, researching, developing and working there in the mid-2020s.

Energy concept for Bochum-Laer - The historic colliery as an opportunity

The new development of the area also raised the question of how the future heating and cooling supply of the new owners and users should be provided. In addition to the classic alternatives, the supply of natural gas or conventional district heating, Stadtwerke Bochum Holding and its subsidiary FUW GmbH as local energy supplier discussed together with the International Geothermal Centre (GZB) of the Bochum University of Applied Sciences as a research institute a grid-connected heating and cooling supply on the basis of renewable energies. It turned out that the history of the area - the old mine - also represents a potential for the future. Parts of the old mine, in particular the sections of the old mine on the eight levels, are now completely filled with water and thus form an extensive geothermal reservoir that can serve as the basis for a heating and cooling network.

Wish to know more about D2Grids ?

Join the online community and follow the project's progress !

Low-Ex heat and cold supply of the latest generation

For the sustainable supply of Mark 51°7, a low-ex heating and cooling network was considered on the basis of geothermal energy from the old mine, which - in line with the future-oriented commercial and industrial enterprises - ensures a future-oriented, resource-saving energy supply.

The heating and cooling network comprises the following characteristics: 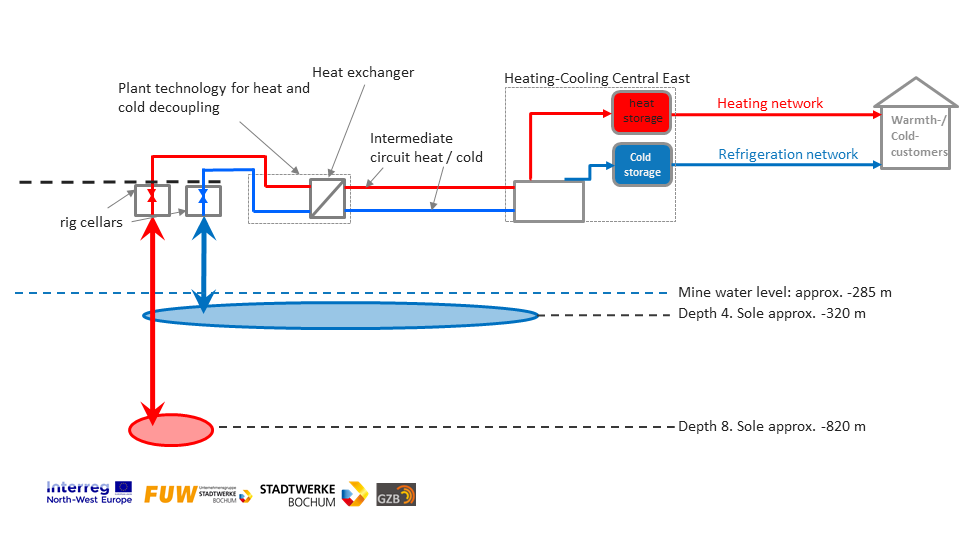 Low-Ex concept including geothermal development of the mine

At first glance, using the underground potential of the old mine seems obvious. The technical use of the mine has not yet been realised in Germany, but there are also many open questions that need to be answered in advance. What is the position of the owner of the old mine under mining law with regard to the new types of utilisation plans? How does the mine and the underground behave if hydraulic or thermal changes are made? How much heat can be permanently extracted or stored from the mine workings? How can directional drilling be carried out to develop the fourth and eighth levels as planned?

Stadtwerke Bochum Holding, FUW GmbH and GZB have asked themselves these and many other questions. As part of the Interreg North-West Europe programme, the partners receive project funding (D2GRIDS) to enable the mine to be developed.

The drilling and development concept is currently being developed with the aim of being able to tender the two wells in 2020. At the same time, Stadtwerke Bochum is planning the above-ground heating network including the necessary heat pump / chiller and is already aiming to acquire a first reference customer.

Vision for the future

As described above, Stadtwerke Bochum is in a first step in negotiations with a first reference customer. The supply would comprise approx. 960 MWh/a for heating and 400 MWh/a for cooling, with corresponding outputs of 800 kW and 500 kW respectively. In addition, a PV system with 90 kWpeak is planned, whose electrical energy is to serve as drive energy for the heat pump.

However, connecting the reference customer is only a first step in the development of the entire site. In the final phase, the Stadtwerke Bochum will be able to cover 80% of the heating and cooling requirements on the site - 11,400 MWh/a heat and 6,800 MWh/a - up to 85% from the geothermal energy of the mine. At least 1,700 t CO2 are saved annually.

Stadtwerke Bochum Holding, FUW GmbH and GZB are convinced that the project - if successfully implemented - can also serve as a reference for other municipalities, municipal utilities and project developers. In Germany, there is extensive potential in the Ruhr area in particular, but also in other old mining regions such as Saarland or Aachen, which can be exploited via the latest generation of heating and cooling networks.