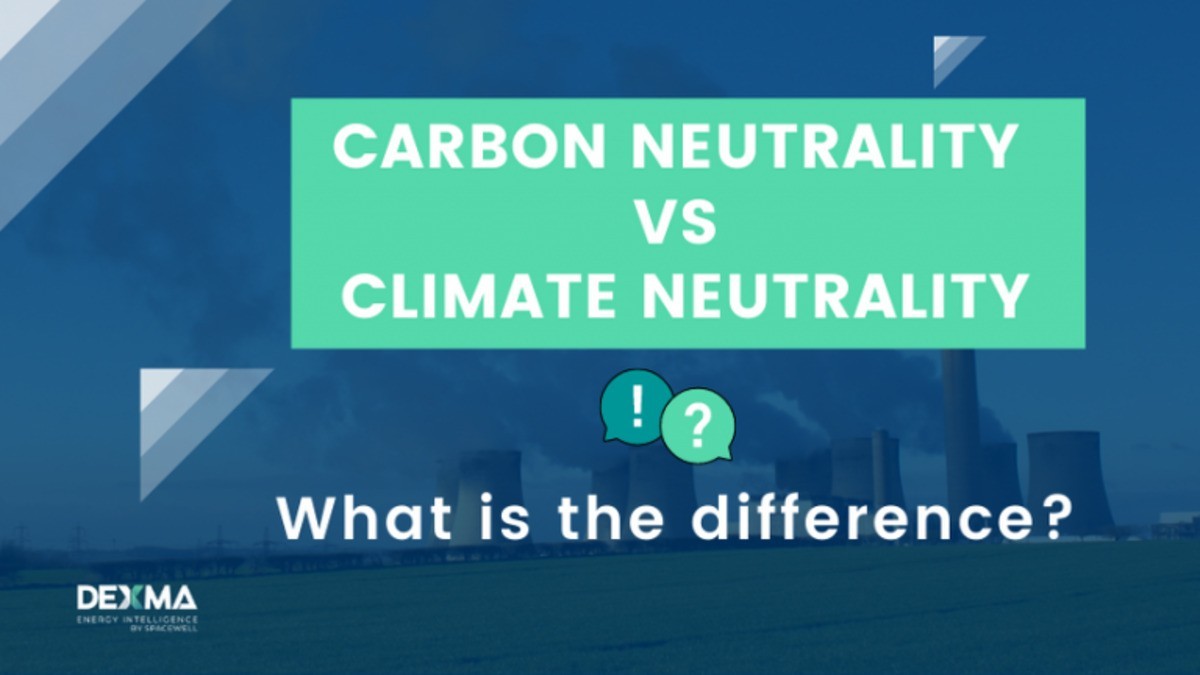 Carbon Neutrality and Climate Neutrality are often used interchangeably, but they are not the same thing. In this article, we explain the difference between them and how to get a Neutral Carbon certification for your company. Click on “Read more”, and find out what the differences are:

What is Carbon Neutral

They are joined by the European Union, the United Kingdom, Japan, the Republic of Korea, and more than 110 other countries. In the case of China, the country is aiming to achieve carbon neutrality by 2060.

And when are you considered carbon neutral?

Simple, when the amount of CO₂ emissions you emit into the atmosphere is the same amount of CO₂ that can be absorbed naturally by forests and plants (which function as carbon sinks thanks to photosynthesis) or that is compensated by other actions. In other words:

Although it is a simple equation, getting to zero is a bit more complicated. First of all, you need to calculate what your Carbon Footprint is. For example, within the DEXMA Energy Intelligence Platform you will find the Carbon App that will help you convert your energy consumption into carbon dioxide emissions.

Once you know what your Carbon Footprint is, you should reduce as much as possible the emissions produced as a result of your activity, and on the other hand, compensate for those that you have not been able to eliminate.

To reduce carbon emissions, the key is to change habits and invest in cleaner, more efficient technologies that consume less energy and produce fewer CO₂. But, to be honest, depending on the economic activity of your business, you will not always be able to reduce your carbon emissions to the point where they are 100% absorbed by nature, or at least not immediately. So those CO₂ emissions that you have not been able to eliminate, you will have to compensate for them in other ways, so that your equation results in zero.

To compensate for carbon emissions NOT absorbed you can choose between different actions, such as:

For the latest option, there is a market regulated by the European Union. It is like a kind of stock exchange where the price per tonne of carbon has been set, and where you can buy or sell the tonnes of CO₂ you need to meet your legal and carbon neutrality targets.

If you have done your homework so well that you have CO₂ emission allowances left over, you can resell them on this market and monetise your carbon footprint. Read more about this in this article.

This will not only help your company or organisation to achieve carbon neutrality, but will also help to reduce your energy costs, and of course, avoid penalties for non-compliance with CO₂ emissions regulations.

And if your company is among the TOP 10 in greenhouse emissions reduction and has reached carbon neutrality, we recommend you to get a Carbon Neutrality certification and scatter the news to the four winds.

How to get a Carbon Neutrality certification

One of the best-known certificates is the Carbon Trust, which follows the international carbon neutrality standard PAS 2060. This standard sets out requirements for the quantification, reduction and offsetting of greenhouse gas (GHG) emissions from organisations, products and events.

Another globally recognised certificate is CarbonNeutral. With this certification, you can demonstrate the veracity of the actions carried out in your carbon strategy. They offer different kinds of certifications, depending on whether your organisation wants to declare the carbon neutrality of the whole company, of its offices, of a product or service, or of just an event.

These are just some of the best-known standards in this respect, but depending on your objective, you can look for others that better suit your case.

What does Climate Neutrality mean, and how does it differ from Carbon Neutrality?

So what is climate neutrality?

Climate Neutrality refers to the mitigation of all greenhouse gases (GHG), not just carbon dioxide.

In this case, our equation would be as follows:

It is true that carbon neutrality is a big step, as carbon dioxide accounts for about 80% of the planet’s greenhouse gases. But there are still 20% of other gases that need to be in balance in order not to affect global warming. And which gases are these? We are referring to:

In many cases, being carbon neutral will limit the contribution to climate change. However, your actions should not only focus on mitigating your CO₂ emissions, but also on controlling and improving emissions of these other gases.

How can my company achieve Climate Neutrality?

As we have already said, achieving climate neutrality means going beyond mitigating our carbon dioxide emissions. We must achieve balance with nature on all GHGs that contribute to global warming.

In the case of the European Green Deal, the objective is not only to achieve Carbon Neutrality but also Climate Neutrality by 2050. Its strategy is based on 7 key elements:

As you can see a key point is ENERGY, which we depend on in all aspects of our daily lives, from our everyday life to the way we produce or use energy to create products and provide services.

So your organisation is a cog in the system that must carry out actions that contribute to:

But let’s go step by step, for example start by calculating your energy in CO2 emissions, and then calculate your Carbon Footprint. This would be part of the energy audit that you should carry out of your facilities.

If you have many buildings or facilities to audit, you can start with a tool that performs a preliminary analysis for you (a virtual energy audit) to detect the buildings with the greatest savings potential and to segment your portfolio. This can be done with a solution such as DEXMA Detect, a tool that works with non-intrusive load monitoring models (NILM).

If you want to carry out a more advanced management and analysis of the energy you consume, it is better to move on to a more powerful tool such as DEXMA Analyse. You will be able to monitor your consumption in real-time, create advanced reports, carry out analysis and verification of your energy efficiency actions, as well as opt for +30 Apps among which you will find the “Carbon Footprint Calculator”.

In the end, efficient energy management of your facilities will allow you to reduce your carbon footprint and other GHG, achieving the Climate Neutrality required by the EU.

If you are looking for a smart energy management system to help you achieve carbon and/or climate neutrality, do not hesitate to contact us.