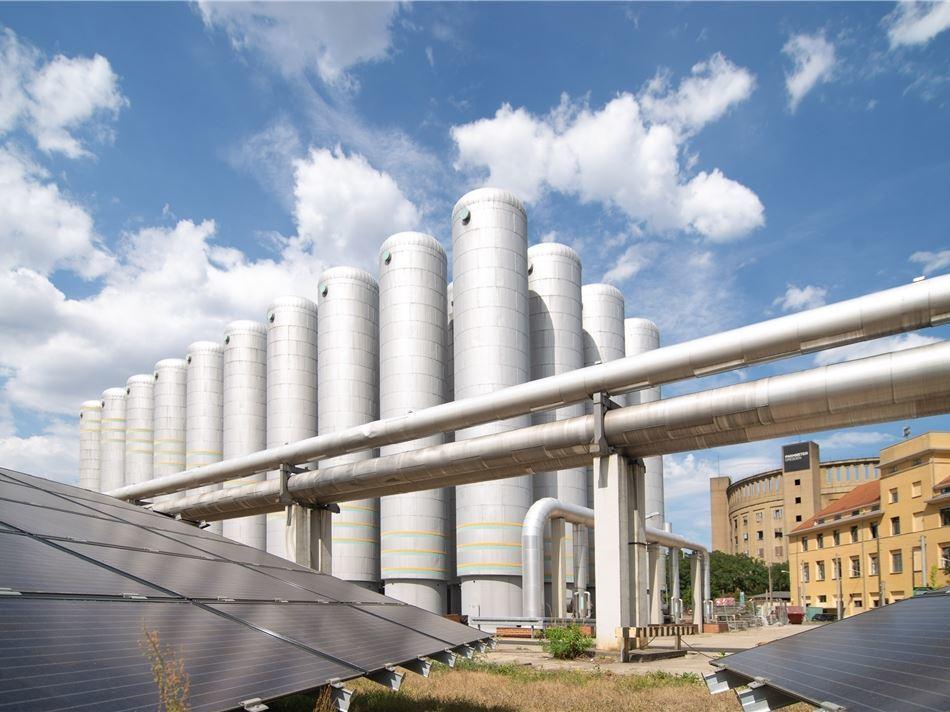 Trial operation has begun for the latest heat towers of the storage tanks at Reick power station. The Technical University of Dresden monitors the effectiveness of the district heating system.

Thomas Dautert stands in the innovation power plant Dresden. Where one and a half years ago a large excavation pit was still gaping, now grey storage tanks tower up almost 30 metres – announcing that the municipal energy supplier DREWAG is expanding its district heating network. The 42-year-old specialist manages the project. Built in 1985, DREWAG already stored up to 6,600 cubic meters of hot water for optimized operation of the district heating network and the power plants. With the 20 new towers, the capacity has been more than doubled.

"The transport was particularly demanding," he says. The containers, each weighing 100 tons, were manufactured by a specialist company in Bielefeld. They came to Dresden on ships via the German Mittelland Channel. The originally planned route on the river Elbe was rejected. So the heavy transports had to travel from Dresden harbour through the city to the building site. This was only possible from the end of November, when the arch of an ancient bridge was torn down. The last two towers had to take a detour over the Neustadt side of the river Elbe, as from the end of February the scaffolding for the new bridge arch was already in place and there was no way through. The last towers were positioned in April this year.

To ensure that the heat is well stored, fitters packed the steel containers in three-layer mineral wool, protected under the outer skin made of grey aluminum sheet. Some of the scaffolding is still towering. However, they can soon be dismantled. This Monday the towers were inspected for acceptance. Among other things, the fastening of the sheets and pipes was tested, Dautert cites an example.

Most of the containers are already filled with water. However, this could only be done step by step from the inner towers to the outer towers in order to evenly load the base plate, since a total weight of 7,800 tons is added. The base plate had only sunk by one centimeter, the surveyors concluded.

So the trial operation of the first two tanks could start in July, followed by the others next month. "All plants are to be fully commissioned in October – on time before the heating period," says the project manager.

A special measurement technology is also installed, financed by the EU funding project "MAtchUP" being coordinated by the Economic Development Office of the City of Dresden. The hot water flows through four tanks, which are connected by the pipeline system as a so-called road. On one of them a 300-meter-long fiber optic cable was laid on the walls of the tower. Temperatures are determined for every second. Together with TU Dresden, the data will be evaluated. "This optimises the system and thus reduces heat consumption," Dautert calls the effect.

More than 90 percent of district heating comes from Dresden's eight CHP plants. A gas turbine drives a generator that generates electricity; the waste heat is used to generate district heating. With the new tanks, much more excess hot water can be stored during times when it is not needed. The DREWAG facilities are thus better utilized. Green energy converted into hot water from solar or wind power plants can also be better stored temporarily. Eight million euros will be invested in the project. "In the end, we are happy that everything went so quickly," Dautert sums up.

The MAtchUP project secured the financing of the monitoring and thus optimization of the running system. This project revolves around creating smarter, clean cities capable of handling the challenges of climate change. Followers are expected to benefit from the Lighthouse Cities’ knowledge, and use this accordingly for their own transformation processes. The aim is to bring cities, industry and citizens together to implement solutions and business models which generate measurable success in areas such as energy and resource efficiency and new markets.

The Economic Development Office of the Saxon state capital Dresden coordinates the work in MAtchUP in Dresden. It brings together partners from business, research and administration. "Think global - act local" - according to this motto, the Office for Economic Development is working specifically on maintaining and expanding the growth conditions for an internationally competitive and sustainable development of economy, education and research in Dresden. It supports local companies and start-ups on a wide range of issues, assists investors and coordinates the development towards a smart city.

DREWAG - Stadtwerke Dresden GmbH supplies some 300,000 customers with electricity, gas, district heating and drinking water. With its roots in Dresden, its staff works to ensure a reliable, sustainable energy supply for the state capital, while the source of added value stays within the region. Most of the electricity, district heating and drinking water are self-produced. The staff is based locally in Dresden – making customer proximity and customised energy services additional strengths along with environmentally friendly energy production. As an employer and trainer, DREWAG is also an important job driver for Dresden and the surrounding region.

The phenomenon of developing more than one dwelling on a single lot is called a multi-development property project. In this aspect, there is more one house, unit or even townhouse. The multi-unit development is considered a successful (...)

Historic buildings constitute a considerable share of the European building stock. About 35% of the EU's buildings are over 50 years old, with 26.4% dating from before 1945 [1]. Improving the energy performance of historic building (...)