As climate changes, the way we build homes must change too

The impacts of floods, wildfires and other catastrophic events are on the rise in Canada. They’re already costing the country billions of dollars in losses, which only stand to grow in the coming years.

The Canadian insurance industry defines a catastrophic event as one that exceeds a threshold of $25 million in insured losses — the portion covered by private insurance. Insurance claims due to extreme weather reached $1.9 billion in 2018, including the late December wind storm on British Columbia’s south coast that downed trees and powerlines, and damaged more than 3,000 homes. 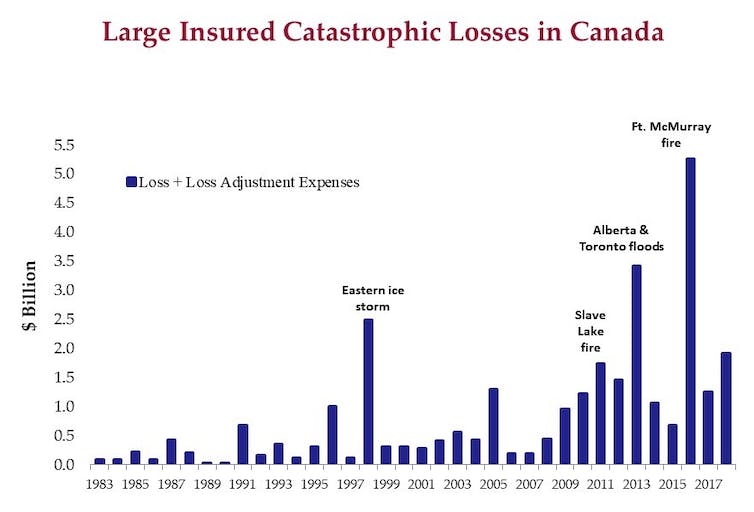 These numbers, however, are only the tip of the iceberg.

Who pays for disaster damage?

In many western industrialized countries, only about 40 per cent of disaster damages are insured. This means that citizens absorb the lion’s share of damage costs in the form of insurance deductibles, costs not covered by insurance such as lost work days and higher prices passed on by businesses.

Taxpayers also fund government disaster assistance, which topped $1.02 billion in 2013-2014. Between 2009 and 2015, the federal government provided $3.3 billion in recovery funding, more in those six years than in the first 39 fiscal years of the program combined.

As people place more assets in harm’s way, existing public infrastructure ages and climate change impacts increase in the decades ahead, these large losses will only worsen.

The solution to the challenge of building societal resilience involves fostering a “whole of society” approach that includes academia, private industry, all levels of government and property owners to mitigate the impacts of natural disasters on society.

One of the weakest links in the chain is the lack of resiliency built into homes. Building codes represent the minimum legal requirements for house construction and do not take extremes into consideration.

Surprisingly, academics have paid scant attention to the home building industry and the building codes that guide the construction of thousands of houses per year. A new collaboration between researchers at Carleton University and Western University’s Institute for Catastrophic Loss Reduction aims to promote the construction of disaster resilient homes that can weather the changing climate.

Since their origins in the 1940s, Canadian building codes have existed primarily to keep people healthy and safe. Building codes have since grown into large, complex technical documents that govern numerous aspects of house construction. In light of the recent impacts of severe weather and wildfire, both insurance companies and the federal government agree that building codes could better incorporate disaster risk. 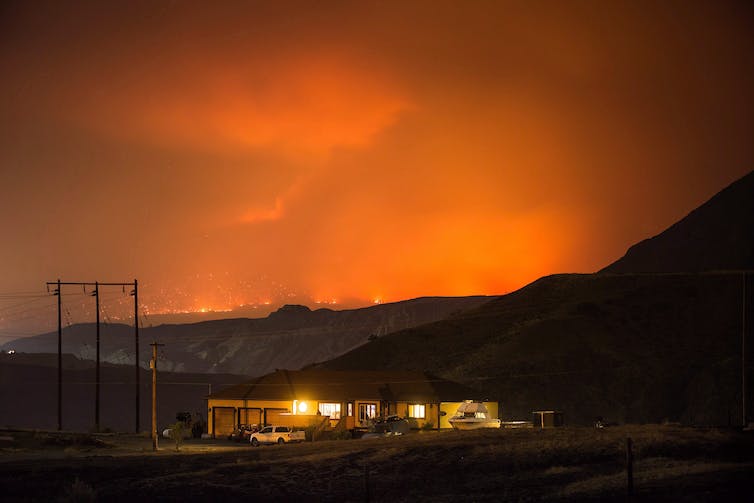 A wildfire burns on a mountain near Cache Creek, B.C. on Jul. 10, 2017. THE CANADIAN PRESS/Darryl Dyck

But what is a “resilient home?” Resilient homes are built to withstand extremes, such as heavy rainstorms, wildfires and severe wind. They are better than those “built to code.”

The combination of strong building codes that reflect current knowledge and rigorous inspection regimes leads to far less injury, loss of life and property damage from severe weather (and earthquakes).

The seeds have been planted

There is more interest in reducing disaster risk now than ever before. Several federally funded projects are now looking at different types of floods, wildland fires and future climate data, in part so that builders construct homes to be more resilient.

But change is slow due to the rigorous code development process. Code officials are planning to include resilience upgrades in the National Building Code in 2025. According to our research, change is also slow due to resistance from the building industry that, in many instances, remains sceptical that construction practices need to change. Many builders and building trade associations believe that the current code is adequate to address the threat of severe weather.

But the costs and disruption from severe weather events speak for themselves. Current and future damages are unacceptable when weighed against small changes in construction practices such as extra fasteners that secure roofs in high winds, $150 backwater valves that keep sewage out of basements during extreme rainfall events and fire resilient siding that is often close to the same price as more flammable options.

The home building industry knows how to innovate. In response to public and political demands for carbon-cutting measures, new housing is dramatically more energy efficient than it was even just a decade ago.

Builders now face another challenge: adding resiliency to homes so that they withstand severe weather. In many cases, we know what needs to be done to make homes more resilient, but face objections from some groups who need to be onside to make this happen.

The challenge is amplified by homeowners and voters who don’t seem aware of risk and who are not giving clear direction on climate change to politicians and builders.

All of society must acknowledge growing risk and act to protect our homes — and those who live in them — now and in the future by recognising the science behind changing weather and by accepting responsibility for making new homes safer.