The Waste House project at the University of Brighton takes the idea of recycling to a whole new level: it has been constructed entirely out of rubbish and repurposed materials, yet it's fully functional and large enough for an eco-friendly family to move into.

Parts of the Waste House are insulated and protected by everyday rubbish you might find in any household bin, and there's a lot of it. The team working on the project collected 20,000 toothbrushes, 4,000 DVD cases, 2,000 floppy discs and two tonnes of denim offcuts for example, which were packed inside the walls of the structure – in some areas transparent windows allow visitors to see the materials stuffed into the walls.

Ground granulated blast furnace slag (known as GGBS or GGBFS) provided the foundations of the property, while most of the framework has been built using timber beams, columns and joists taken from a nearby demolition site. 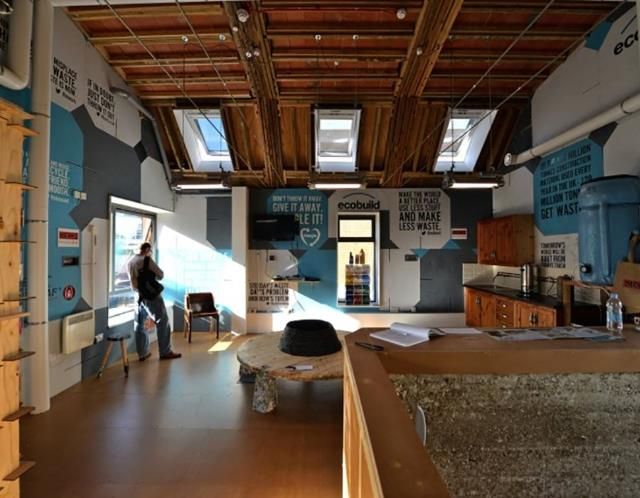 BBM's director Duncan Baker-Brown worked together with Brighton undergraduates to design the Waste House. 'It's about proving that you can build something with other people's stuff, and that you can make a permanent building out of rubbish,' he told Dezeen. 'There have been a lot of other projects where people have built sheds or temporary things out of rubbish, but to get full building regulations and planning approval is a first.'

Apprentices from the social housing group Mears helped in constructing the Waste House, which took two years to complete and was originally inspired by another BBM project – a temporary, organic building that featured on the TV show Grand Designs. 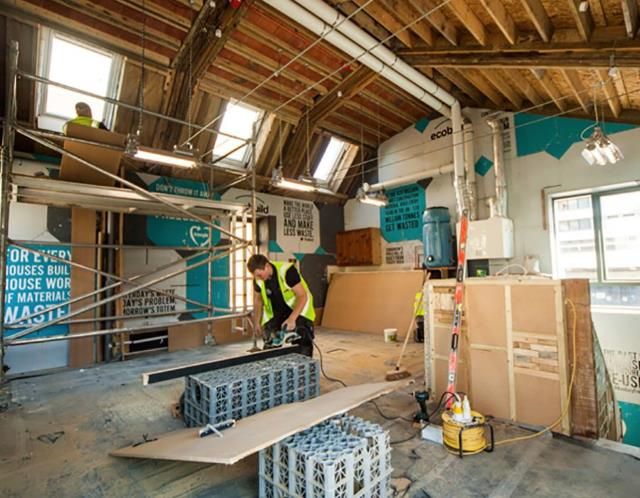 Quite how well thousands of toothbrushes and DVD cases will insulate the new building remains to be seen, but the developers are confident these materials will work well – students and staff have fitted heat sensors inside the Waste House to keep an eye on how much warmth is retained within the structure and how much is lost.

Throughout the two floors there are information panels and displays explaining the benefits of sustainable living and promoting the use of recycled materials. Ten tonnes of chalk spoil from a local building site as well as 2,000 used carpet tiles were also incorporated into the house.

As well as hosting workshops and community events for local groups and schools, the Waste House will also be used as a case study for those on the university's Sustainable Design MA course. Parts of the building do have an unfinished look, but that's intentional. 'The idea is that students learn how to accommodate whole-house ventilation and heat recovery into a design,' explains BBM's Baker-Brown.

'It's all exposed so people can see what's going on.' The students are going to be invited to develop their own recycled structures or furniture which can then be used inside the Waste House itself or on other projects. 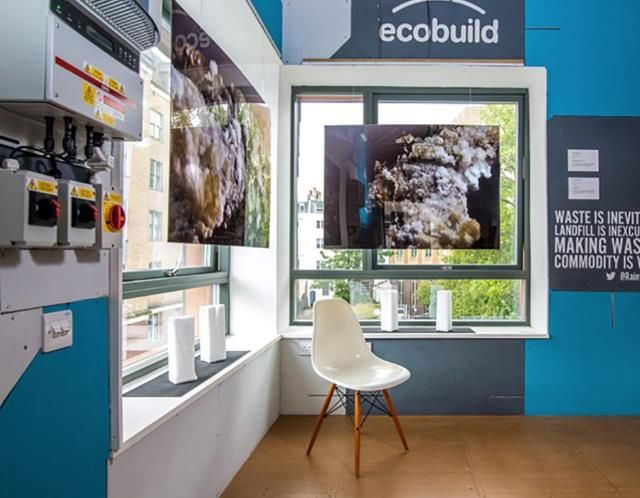 All of the furniture inside the Waste House has been custom-made from scratch with recycling and repurposing in mind, with students looking to explore the ways in which waste material and organic material can be combined together. Despite all of the discarded rubbish used, the building still meets modern safety standards and is fully functional thanks to the electrical wiring and plumbing system installed.

In addition, the Waste House features triple-glazed windows, high-powered skylights and exterior cladding made out of disused carpet tiles attached to a special breathable membrane. Five hundred inner bike tubes were used to soundproof the house at various points and provide effective seals for the windows.

"No such thing as waste"

Thanks to the industrious efforts of more than 250 people, the Waste House now sits on the Grand Parade at the Faculty of Arts campus and is open to students and visitors alike. 'One of the main aims of the project was to prove that there is no such thing as waste, just stuff in the wrong place,' said the university in a statement.

Various departments within the Brighton & Hove City Council, as well as several suppliers in the construction industry, contributed to the project. Volunteers helped to swell the ranks of students and apprentices who put the Waste House together. 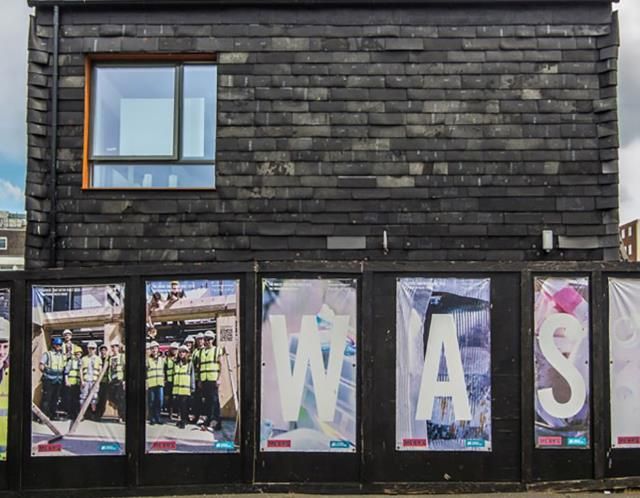 Waste not, want not

The development team behind the Waste House tapped into all kinds of sources to find materials for the project. Most of the 20,000 toothbrushes, for example, were supplied by Gatwick airport from belongings left behind by travellers. A membrane made from old Pirelli tyres is used on the roof, while 20 litres of second-

hand paint were obtained from a nearby decorating store.

Two hundred rolls of brand-new wallpaper – discarded by a retailer to make room for Christmas decorations – were also incorporated into the finished building. The worktop in the kitchen has been made from second-hand coffee grinds and recycled plastic coffee cups.

Recycled paper, discarded polystyrene packaging, second-hand bolts, returned roof insulation, plywood reused from other building projects, plastic bags that have been thrown away, surplus planks of MDF... the list of reused materials that make up the Waste House goes on and on. Where possible, the house's wiring and plumbing networks were put together using second-hand equipment as well.

For example, one of the main rooms inside the building is illuminated by lights salvaged from a 50-year-old South Korean container ship moored in Bangladesh – it's perhaps the most exotic and unusual item out of the fixtures and fittings inside the Waste House. 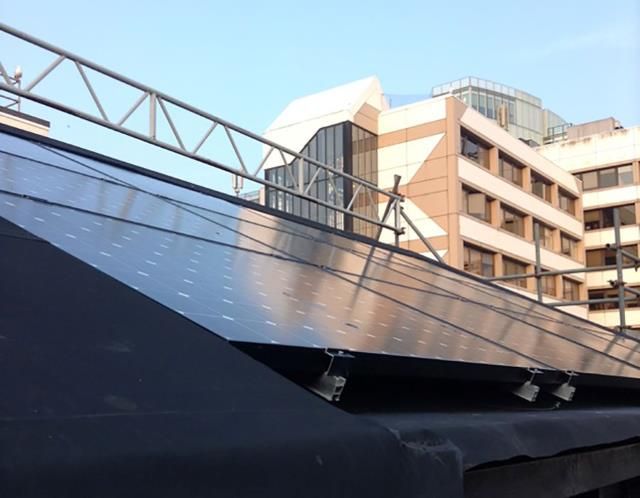 Part of the Waste House's power is supplied by an array of solar panels fitted to the roof. Supplied by South Downs Solar, the panels are capable of producing 4kW of energy. With sustainable living now an urgent and global issue, the backers behind the Waste House are hoping that it can work as an example and educational tool for future generations.

Students and faculty staff are going to test the performance of various materials in the Waste House during the months and the years ahead, giving architects, designers and city planners more information about the best approach for the next wave of sustainable, eco-friendly buildings.

For now the Waste House is a valuable educational resource – over 700 school children have already visited the site to learn about recycling and reusing materials, and many more will do so in the future.

'Any interested parties can join in with sustainable design workshops and events curated by designers, artists, makers, builders, scientists, writers-in-residence or whoever else is interested,' say the Waste House team, who have described their creation as a 'living laboratory' for ecological architectural design – it's not just the material used to build the house but also the processes and equipment used to put it up that other projects and councils can learn from.