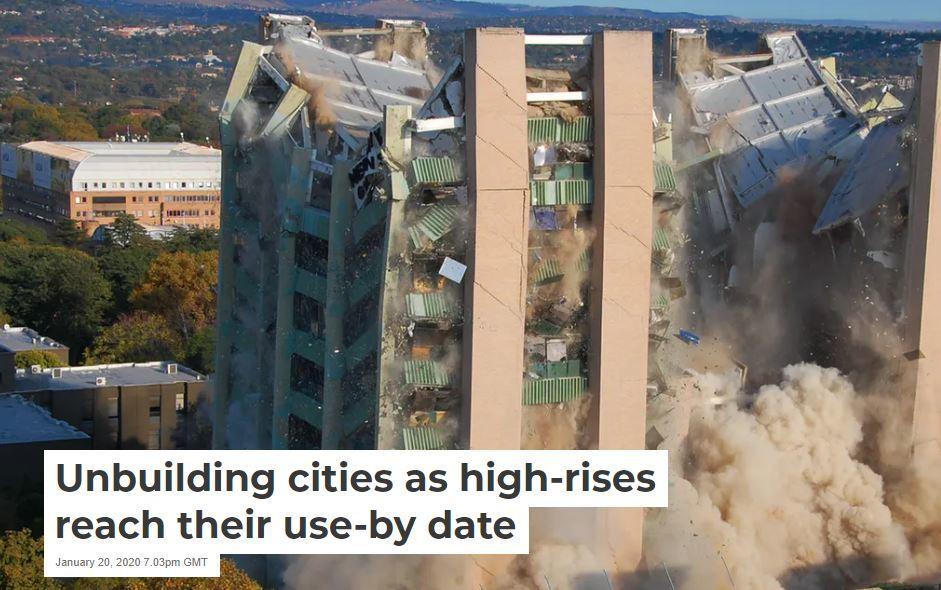 We are entering a new world where skyscrapers and other huge buildings are becoming redundant and need significant overhaul or replacement. The process is called unbuilding or, if you’re a bit highfalutin, deconstruction.

These so-called spreadsheet towers populate every major city. They signalled modernity and provided huge profits for those who built them. But these buildings are profligate users of fuels for light, power and services.

Read more: Buildings produce 25% of Australia's emissions. What will it take to make them 'green' – and who'll pay?

Most developed world cities started building skyscrapers after the second world war. These buildings were International Style architecture, unrecognisable is terms of a particular locale, universal in terms of their ubiquitous metal, concrete, glass – and fully air-conditioned. Now they are ageing, their use-by date is up and their balance sheet profitability no longer attracts.

The challenges of demolition and reuse

The question is: how do we safely dismantle these high-rise structures, which are generally located in busy cities?

Reminders of the dangers of explosive demolition are tragedies such as the death of 12-year-old Katie Bender. She was struck by flying debris when the Royal Canberra Hospital was razed in 1997 to make way for the new National Museum of Australia.

A news report of the 1997 Royal Canberra Hospital demolition that resulted in the death of 12-year-old Katie Bender.

A recent demolition, and the tallest ever to be unbuilt, is 270 Park Avenue, New York City. Its 52 floors were built in 1960 for the Union Carbide chemical company. The building was for 50 years the tallest ever designed by a female architect (Natalie de Bios of Skidmore, Owings and Merrill. Is that another low hit for gender equality?) Its replacement by architects Norman Foster will be twice as high.

Read more: A short history of tall buildings: the making of the modern skyscraper

The business of disassembling these skyscrapers is just now developing, but it will gain pace as more become obsolete.

Some still get imploded, but usually, in a busy city, demolition techniques must be unobtrusive, as quiet and clean as possible. The techniques used for cleaning up the World Trade Centre testify to the wastefulness of a more destructive approach.

Unbuilding the World Trade Centre: an account by William Langewiesche who reported exhaustively on the work.

So how best to demolish a high-rise building?

Plenty of clever techniques to demolish exist. Some start at the base and work up, others in reverse.

The 40-storey Akasaka Prince Hotel in Tokyo was slowly demolished in 2012-13 using a technique where a cap was built on top of the building. It was stripped floor by floor as the cap was lowered, so all the dust, mess and debris was contained and removed with no effect on the environment.

The Akasaka Prince Hotel shrank floor by floor as it was demolished.

Buildings are wrapped in scaffold and protective fabric then literally dismantled in the reverse order to which they were built. In the process building waste can be recycled and reused rather than dumped.

Read more: How we can recycle more buildings

Reverse building involves removing the glass, then the frames, taking off the wall cladding, then scraping away at the concrete and steel frames bit by bit. Concrete is removed to expose the steel reinforcing bars, which are then separately removed and recycled. In the process unwanted material can be uncovered, like asbestos, which needs particular care in handling.

These removalists act smartly, as materials and fabric are recycled and often reused for another building. It is a sustainable way of dealing with the issue. Things that might normally have been reduced to dust and mud by destruction are instead usefully salvaged and recovered for an extended life cycle.

Read more: With the right tools, we can mine cities

As part of the benefits of this procedure, unbuilding provides large numbers of construction jobs and associated employment in transportation, waste management and recycling.

It also provides new construction sites. This means cities need not expand beyond existing boundaries and the infrastructure of services, roads and public transport need not be extended.

Building with an eye to unbuilding

What has interested those involved with this work is the capacity of building designers (let’s call them architects) to creatively improve their buildings in terms of life after use-by date. Techniques are being developed that assist in unbuilding and salvaging materials, even down to basic principles such as ease of access to pipes and wires, modular components and simplified connection practices.

The logic is that clarity of building structure and services makes retrieval simpler. Less complexity of materials and components means a building can be untangled more efficiently.

Fastening devices can be simplified and mechanical (rather than using glues and sealants), toxic materials avoided, materials selected with an afterlife in mind and structures designed for simplicity and accessibility. Also important is a clear set of as-built documents that map the original building so it can be disassembled.

Clear design thinking will have value for unbuilding and recycling in the future.

The construction industry is a main consumer of fuels, timber, steel and other metals, concrete and plastics. That demand drives the logging of forests, mining and extraction, leading to material production and transport that contributes to emissions and pollution.

The UK Green Building Council estimates the construction industry generates about 22% of UK carbon emissions, uses 40% of drinking water, contributes 50% to climate change and over half our landfill waste, and accounts for 39% of global energy use. The US Environmental Protection Agency (EPA) also reports that the industry contributes to asthma and lung cancer by producing radon via contaminated applied finishes (paint).

Driving the need for much greater reuse of old building materials is an awareness of the fragility of our resources and the energy we use to consume them.

Consult the source of the article