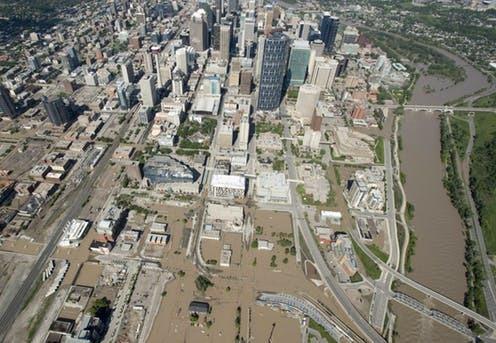 Cities are on the front line of climate change. While their footprints cover a mere two per cent of the Earth’s surface, they consume 78 per cent of global energy and account for over 60 per cent of greenhouse gas emissions.

More than 80 per cent of Canadians reside in urban areas and this trend is accelerating. Critically, a recent study found that most Canadian cities are ill-prepared to manage the impacts of climate change.

Canadians are increasingly standing up against the devastating impacts of climate change. In June 2019, the House of Commons declared a national climate emergency. In September, more than six million people around the world joined Greta Thunberg to stage a global strike for climate. And during this fall’s federal election, voters across the country made every party realize that climate policy is an urgent issue for people of all ages.

Yet the federal government’s rhetorical commitment to climate action rings hollow. It’s the city governments that are increasingly joining global climate movements and playing a major role in tackling climate change. Indeed, hundreds of Canadian municipalities have declared climate emergencies but many have yet to take action.

Here are three evidence-based steps that will allow Canadian municipalities to walk the climate change walk.

Resilience is rapidly becoming a buzzword that’s at risk of losing its meaning. We define resilience thinking as an approach that recognizes the complex interactions between society and our ecosystems, embraces the idea of change and acknowledges uncertainty.

Resilience thinking requires acknowledgement from municipal governments that climate-related changes may be unanticipated and sometimes catastrophic, such as the flooding in Alberta in 2013. With resilience thinking, however, we can move forward with solutions that allow municipalities to continue to flourish despite changes we anticipate and those that surprise us.

The Netherlands, for example, approaches flood mitigation in ways that provide “room for the river” such as increasing the river’s depth, storing water and relocating dykes. Calgary is collaborating with other governments and citizens to protect the city from a future flood on par with 2013 using a Flood Resilience Plan.

Promoting resilience thinking is critical: how we think about the world has enormous implications for the solutions we prioritize. This is true for decision makers — who hold the authority to shift the institutions that govern our cities. But, it is also true for municipal residents — who wield tremendous influence over who governs and which issues receive urgent attention.

The European Union has had a green infrastructure strategy in place since 2013. Canada does not, leaving towns and cities to define their own policies and standards of practice. This may seem daunting, but in fact it gives municipal governments a terrific opportunity to advance natural climate solutions.

Urban soil specifications for tree planting is a prime example of how cities can advance climate solutions. Urban soils form the foundation of well-designed natural solutions. They play a key role in carbon storing carbon and are essential for increasing total tree-canopy cover. 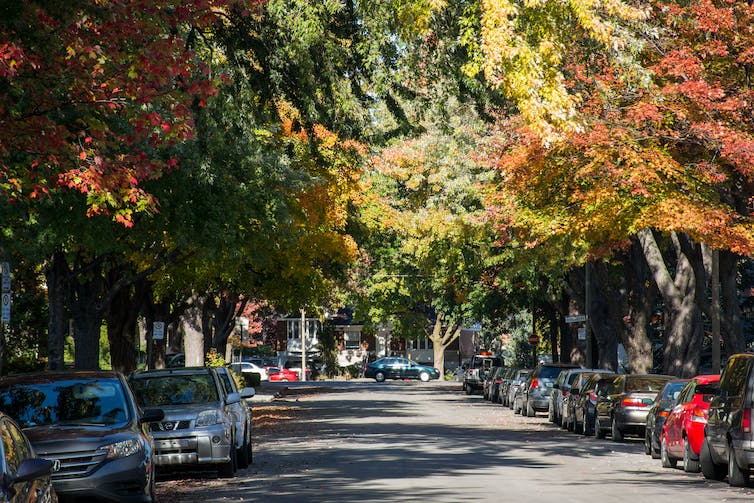 Soil quality, shade, reflected heat and winter salting are some of the factors that can influence whether urban trees live or die. (Caribb/Flickr), CC BY-NC-ND

Research offers guidance on how important soil properties that support vegetation, municipalities are. But engineers, designers and developers are too often disconnected from such research. This is troubling, because both cities and developers stand to benefit from increasing the tree canopy cover: it sequesters carbon, helps manage storm water runoff, reduces the urban heat island effect and removes pollutants from the air, soil and water.

Fortunately, new tools are emerging to help bridge this knowledge gap. For example, the recently released Ontario Landscape Tree Planting Guide helps planners determine how and where to plant trees in urban environments — and keep them alive. Cities that have experimented with green infrastructure have seen positive impacts: more connected ecosystems, improved human health and lowered risk from environmental disasters.

Working together is critical for addressing acute emergencies as well as preparing for uncertain futures.

For example, climate change will make wildfires more frequent, intense and dangerous in Canada, and collaboration among responders has been found to be important to success in battling those fires.

Canadian municipalities are increasingly working together to tackle the climate crisis. Niagara Adapts is a partnership among seven municipalities in Ontario’s Niagara region and Brock University to understand the impacts of climate change, see where vulnerabilities exist and develop climate change adaptation plans. Such processes have been shown to boost climate knowledge and working relationships, ultimately building capacity for adaptation.

Make no mistake, Canadian cities are at a critical juncture. Recent climate strikes and emergency declarations will either radically shape climate action for a better future or fade in our collective memories without inspiring meaningful change.

While all levels of governments have roles to play, climate actions seem to be primarily falling to municipalities. Now is the time for Canadian cities to walk the climate change walk, and ensure that they seize this critical opportunity.

[ You’re smart and curious about the world. So are The Conversation’s authors and editors. You can read us daily by subscribing to our newsletter. ]

Darby McGrath does not work for, consult, own shares in or receive funding from any company or organization that would benefit from this article, and has disclosed no relevant affiliations beyond their academic appointment.